Accessibility links
Joyous 'Bedlam' Expected When San Francisco Gay Marriages Resume : The Two-Way Who will be presiding over the same-sex marriages that are expected to start up again, perhaps next month? An 80-year-old retired woman, among others. 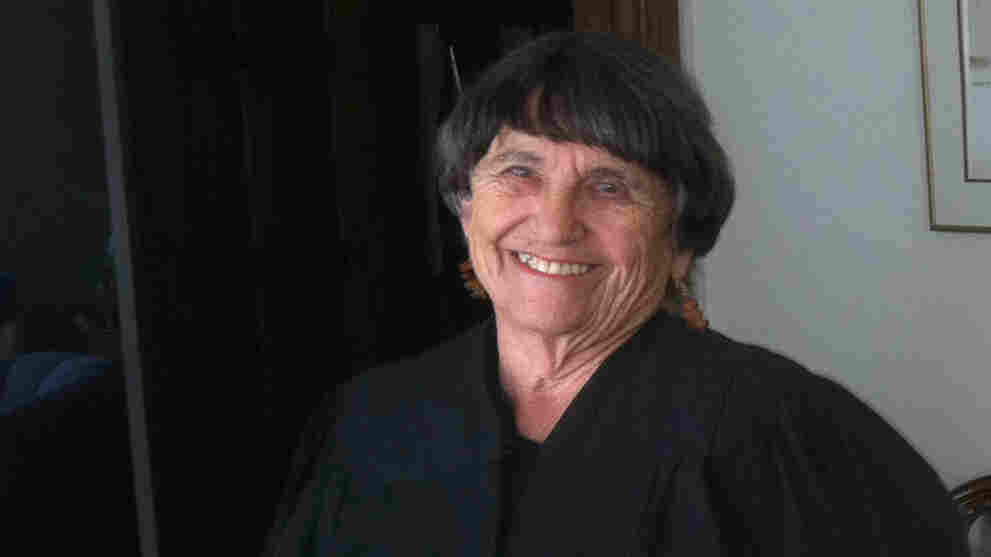 Bernice Frucht, 80, found what proved to be the ideal retirement job through a want ad. In 20 years, she's conducted something like 7,500 weddings. Alan Greenblatt/NPR hide caption

As she's done for the past 20 years, Bernice was conducting weddings at City Hall as a volunteer deputy marriage commissioner at the time. Officials there were awaiting instructions following passage of Proposition 8, which outlawed same-sex marriage in California.

When she spotted a family acquaintance preparing to marry her longtime lesbian partner, she warned the couple they'd better hurry. "They said, 'I do,' " Bernice recalls, "and the [marriage] office manager said, 'That's it, no more.' "

Now that the U.S. Supreme Court has given a fresh green light to gay couples hoping to marry in California, she says, "it will be bedlam."

The weddings are expected to start up again next month. Things remain in legal limbo for the moment, as the 9th Circuit Court of Appeals has to release its stay on same-sex marriages, based on Wednesday's high court ruling.

She welcomes it. Bernice, who has been best friends with my mom for more than 50 years, has fond memories of the short period when gay marriages were last performed in San Francisco.

Flowers and congratulations poured in "from all over the world," she says. "City Hall has never been more festive."

Presiding over such ceremonies changed her own views about the value of gay marriage.

"I thought that civil unions were all right when I started," she says. "Then I saw the reactions of gay couples when they got married. They needed something else — they needed to be like everyone else."

After years of selling linens at Macy's, Bernice found what proved to be the ideal retirement job through a want ad.

It's long been the practice in San Francisco to rely on volunteers to handle most of the wedding work, saving time for paid staff. The qualifications are minimal — basically, the ability to read the ceremonial text, both long form and a shorter version.

Volunteer marriage commissioners typically perform a half-dozen ceremonies each per hour when they're on duty, either in a private room dedicated to the purpose or in City Hall's capacious rotunda.

It adds up. Bernice has conducted something like 7,500 weddings.

Occasionally, she's asked to perform ceremonies for family members and friends (including mine). She can't help feeling a little responsible for the ones that haven't worked out (not including mine).

The Intimacy Of Happiness

When it comes to the strangers who book appointments at City Hall, there's not a lot of time to get acquainted, but Bernice calls it a "wonderful experience" to have shared in this crucial moment in thousands of lives. Some people she married have returned years later to look her up.

"I've probably been in 5,000 pictures," she says. "It's a joyful job, just to be a part of so much happiness on the part of so many people."

Her husband, Phil, died in 2005 after they'd been married for 52 years. Bernice, who is 80, has no intention of ever starting over with someone new.

Still, she's not just an officiant of marriage, but a celebrant. Possessed of a boisterous laugh, her voice grows quiet when conducting a ceremony. "I want the couple to hear what I'm saying," she says. "I don't care about anybody else."

Bernice notes that many of the couples she's worked with — particularly the gay couples — have been the opposite of the impulsive fly-by-nights some people still associate with weddings held down at City Hall.

When asked about the most memorable ceremonies she's conducted over the years, one particularly "dapper" couple comes first to mind: two men, both in their 70s.

"They had been together something like 30 or 40 years, and they shone," Bernice says. "They were just a beautiful couple, beautiful old men."