Accessibility links
Senate Approves Sweeping Immigration Overhaul, In Final Vote : The Two-Way In addition to putting millions of immigrants who illegally entered the United States on a path to citizenship, the bill includes measures that would punish employers who take advantage of immigrant workers, as well as provisions for border security. It remains to be seen how the immigration bill will be greeted in the House of Representatives. 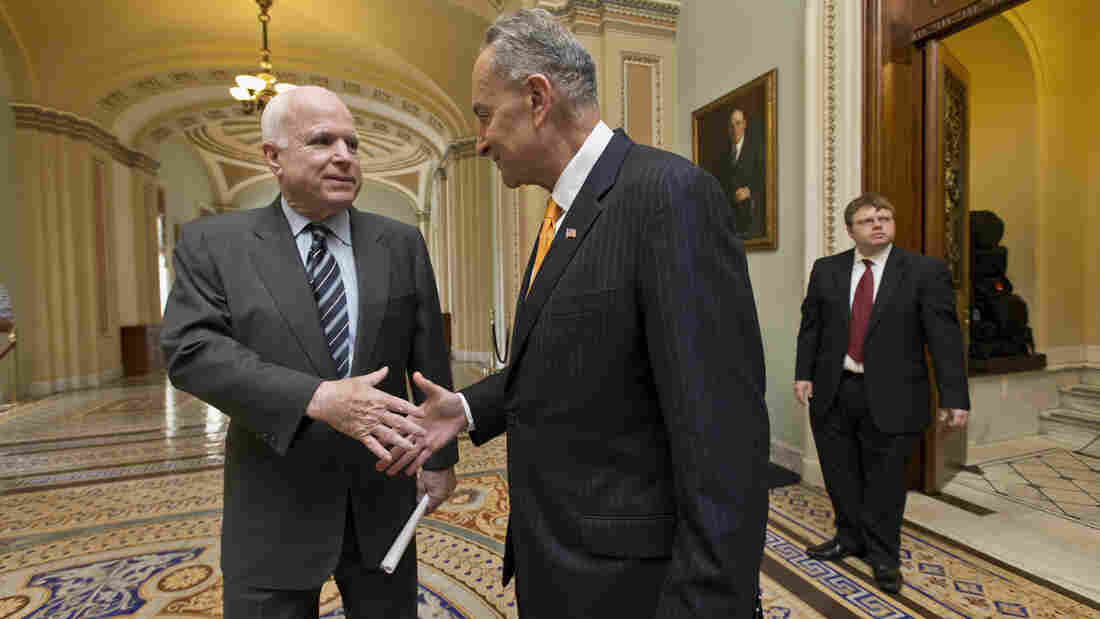 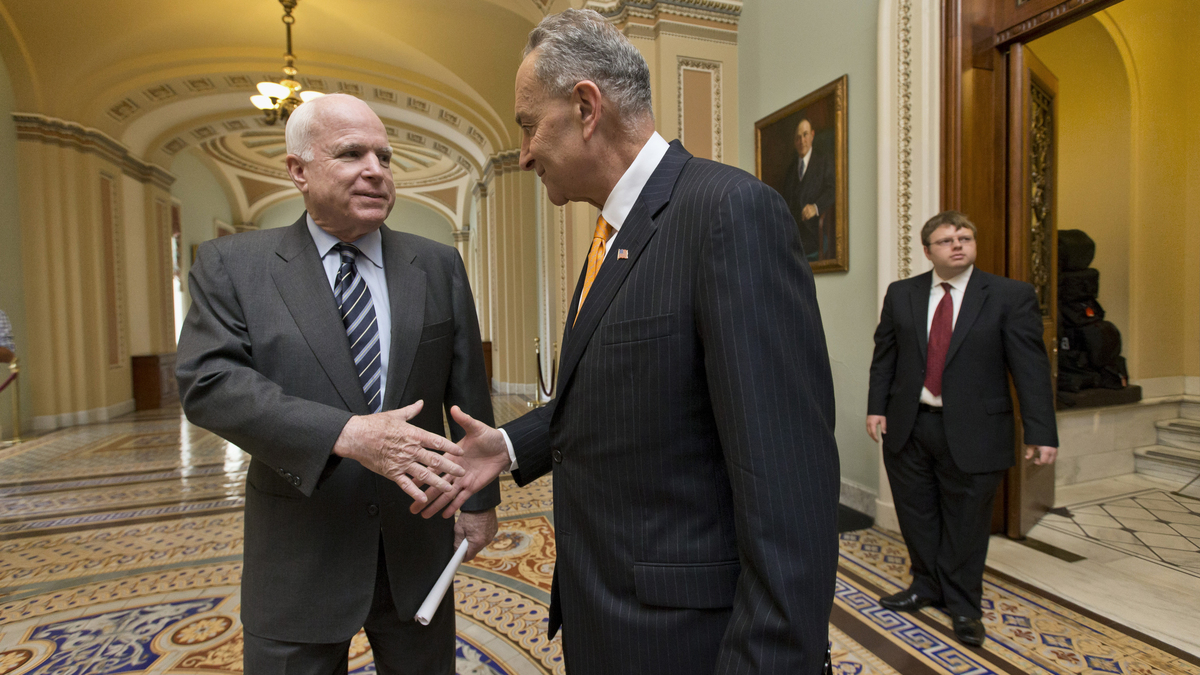 The Senate has passed a sweeping immigration bill, widely seen as the product of the "Gang of 8," a group that includes Sens. John McCain, R-Ariz. (left), and Sen. Chuck Schumer, D-N.Y. The two shook hands before Thursday's final vote.

The Senate approved a sweeping immigration bill Thursday, endorsing a bill that would put millions of immigrants who illegally entered the United States on a path to citizenship. The final vote tally on the bill was 68 in favor, with 32 opposed.

The bill also includes measures that would punish employers who take advantage of immigrant workers, as well as providing billions in spending to employ fences and high-tech tools to help secure the border between the U.S. and Mexico.

All 52 Democratic senators voted for the bill, along with 14 Republicans and two independents.

The legislation, Senate Bill 744, is widely seen as the product of the efforts of the "Gang of 8," a group that includes Sens. John McCain, R-Ariz., Lindsey Graham, R-S.C., Marco Rubio, R-Fla., Chuck Schumer, D-N.Y., and Bob Menendez, D-N.J.

During today's final vote, the chamber briefly erupted in laughter after Sen. Jerry Moran, R-Kan., mistakenly answered the roll call vote with "Aye" — supporting the bill — before abruptly and loudly correcting his mistake by yelling "No!"

Around midday Thursday, the Senate voted to invoke cloture on the bill, called the Border Security, Economic Opportunity, and Immigration Modernization Act, setting an end to debate on the legislation. It has grown to nearly 2,000 pages, although that includes many pages of material that was stricken during debate and compromise.

The bill has been seen as a main priority for Senate Majority Leader Harry Reid, D-Nev., who insisted the chamber would act on it before the July 4 holiday. It is also a centerpiece of the Obama administration's legislative agenda.

"It's landmark legislation that will secure our borders and help 11 million people get right with the law," Reid said Thursday.

The tally of the cloture vote earlier today was also 68-32, with 14 Republicans joining Democrats in voting for the motion. When the Senate approved an amendment on border security to the bill earlier this week, the vote was 67-27, with 15 Republicans voting in favor.

But it remains to be seen how the immigration bill will be greeted in the House of Representatives. And in the Senate, opponents of the bill have included Senate Minority Leader Mitch McConnell, R-Ky., and his deputy, Sen. John Cornyn, R-Texas, along with Sen. Ted Cruz, R-Texas, and Sen. Jeff Sessions, R-Ala.

Several House Republicans are believed to be working on their own versions of the legislation.

"This bill may pass the Senate today, but not with my vote. And in its current form, it won't become law," McConnell said.

Other Republicans, such as Sen. Chuck Grassley, R-Iowa, and Sen. Orrin Hatch, R-Utah, sought to build support for the bill among their party. Backers of the immigration overhaul have said they hoped to pass the legislation with strong support, to improve its chances in the House.

"I like to think that our old friend would be proud of what we're doing," Leahy said.