Accessibility links
Arizona Wildfire Kills 19 Firefighters, Deadliest In Decades : The Two-Way As many as 400 firefighters, still mourning those lost, are now battling the massive Arizona wildfire. Since it began Friday, the Yarnell Hill Fire has grown to more than 8,000 acres, destroying an estimated 200 homes. 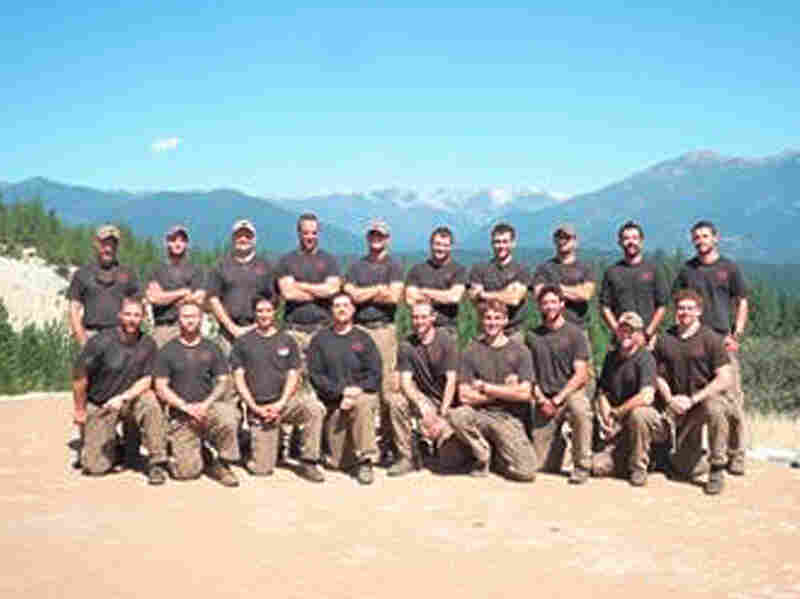 The Granite Mountain Interagency Hotshot Crew is shown in this undated handout photo provided by the city of Prescott, Ariz. The elite team of 19 firemen were killed on Sunday in one of the deadliest U.S. firefighting disasters in decades. City of Prescott/Reuters/Landov hide caption 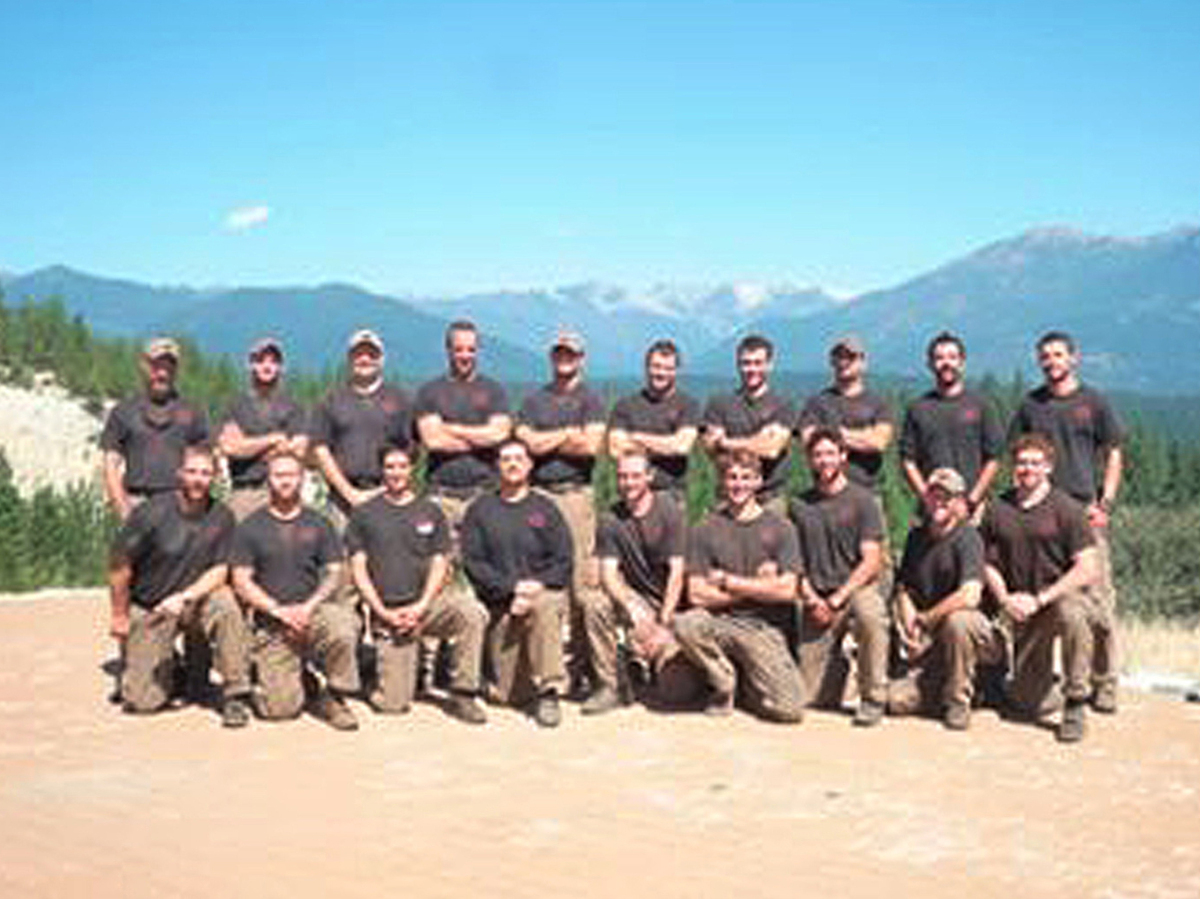 The Granite Mountain Interagency Hotshot Crew is shown in this undated handout photo provided by the city of Prescott, Ariz. The elite team of 19 firemen were killed on Sunday in one of the deadliest U.S. firefighting disasters in decades.

In what is being called the deadliest U.S. wildfire in at least 30 years, an out-of-control blaze trapped and killed 19 firefighters Sunday in central Arizona. They had been forced to use temporary shelters in an attempt to survive.

All of those killed were part of the Granite Mountain Hotshots, an elite group based in Prescott, Ariz., that uses rigorous training to prepare for fighting wildfires. They are frequently deployed to the front lines of firefighting efforts against such blazes.

The city of Prescott, Ariz., has named the 19 firefighters killed Sunday. They are:

The medical examiner's office will conduct autopsies on the bodies of the 19 firefighters.

Meanwhile, Arizona Public Radio's Gillian Ferris reports that the blaze has forced the evacuation of all 700 residents of Yarnell, north of Phoenix, from their homes.

The Associated Press says 400 firefighters are now battling the blaze.

Also, NPR's Howard Berkes is reporting on a new national wildfire forecast. Here's what he told our Newscast Unit: "The potential for significant wildfire is above normal now from the Rocky Mountains to the Pacific Coast, as trees, brush and grasses continue to dry out. In some areas now they're drier than ever recorded." 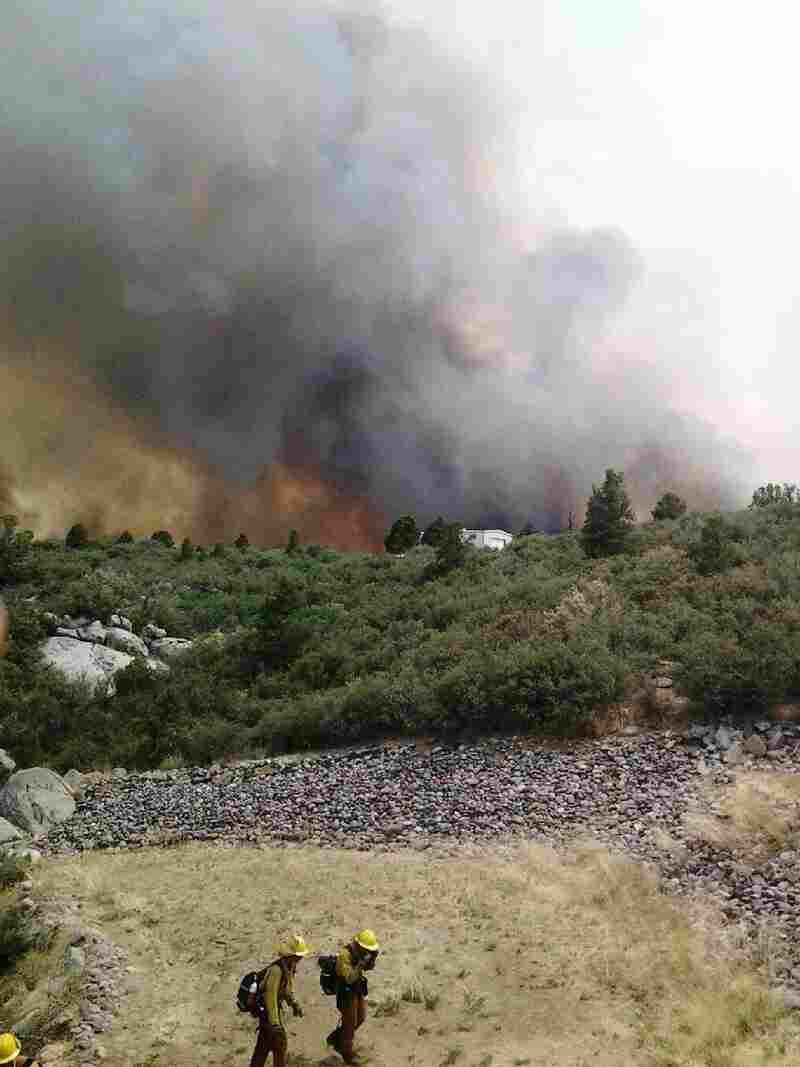 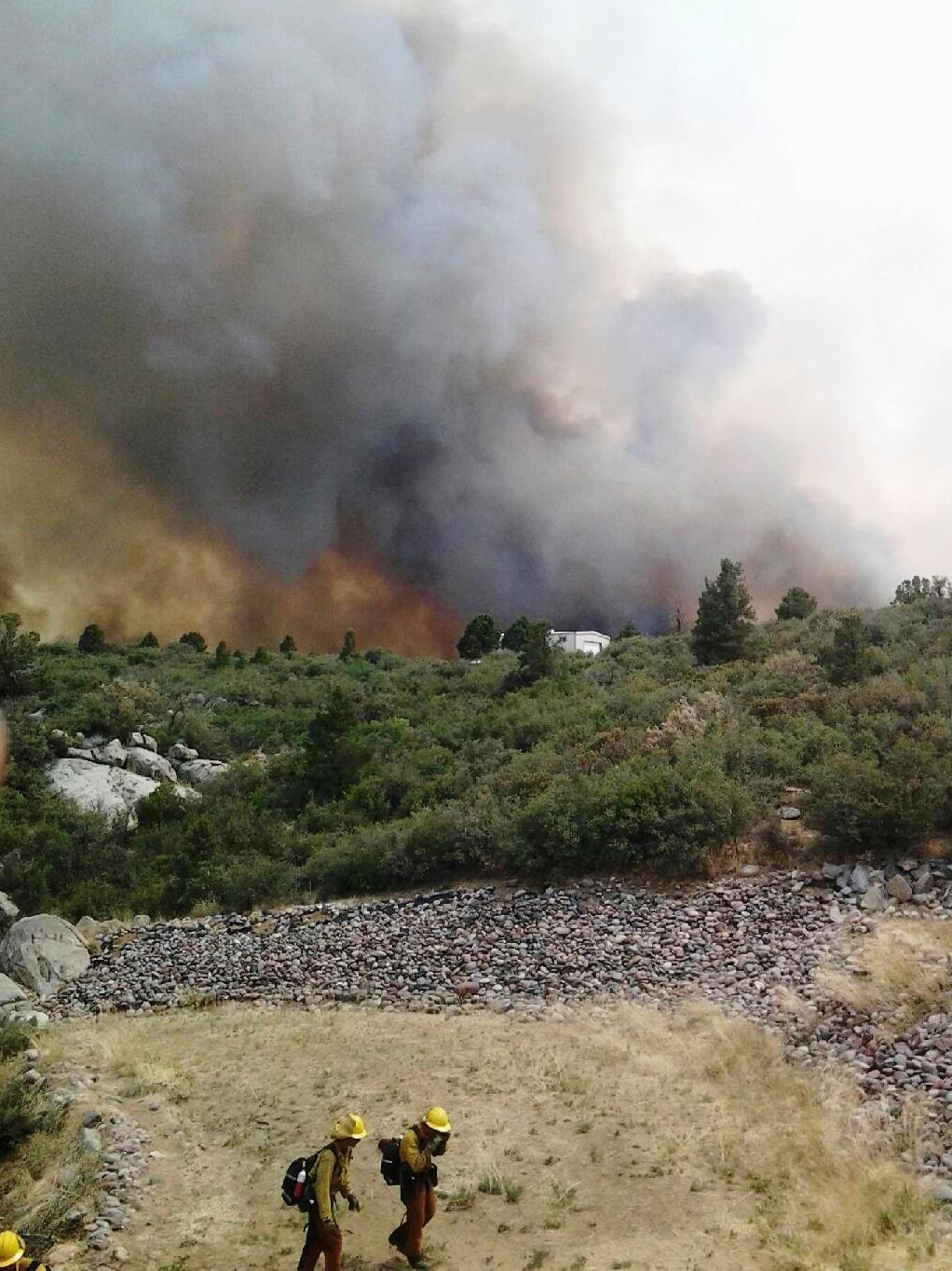 Firefighters are seen working on the Yarnell Hill fire, in this photograph from this weekend provided by the Arizona State Forestry Division. Officials say 19 firefighters died battling the blaze Sunday.

The 19 firefighters who died Sunday were part of the same unit, officials in Arizona confirm. Many early reports had left open the possibility that one of the victims was not a member of the team. Only one of the Granite Mountain Hotshots' 20 members survived. We've revised part of our post below that was written when those details were lacking.

The most recent wildfire that claimed more than 10 firefighters' lives was the South Canyon fire of Glenwood Springs, Colo., which killed 14 firefighters in 1994. Records of deadly wildfires and similar incidents are kept by the National Fire Protection Association, which lists the Griffith Park (Los Angeles) blaze of 1933 as the last wildfire to claim more lives than the Yarnell Hill fire. A reported 29 firefighters died in the Griffith Park fire.

The latest information we have from the incident management team handling the Yarnell Hill fire is that the wildfire grew to 8,374 acres as of this morning. The fire's containment is listed as zero.

Firefighters are continuing to fight the blaze, supported by air tankers and helicopters dropping fire retardant and water. Emergency officials say that four more hotshot crews are on their way to help.

The Yarnell Hill Fire started Friday near the town of Yarnell, about 85 miles northwest of Phoenix. The cause is under investigation, but many news outlets are reporting that the fire may have been sparked by a lightning strike. The blaze grew quickly and erratically, spreading from 2,000 acres to 6,000 acres as of late Sunday night. The flames have destroyed at least 50 structures.

The loss has led to the creation of a Facebook page honoring those killed by the fire over the weekend. As of this morning, more than 100,000 people had liked the page, with many people, including Arizona Gov. Jan Brewer, writing in with their condolences.

Hotshot crews often have about 20 members. Cut off from safety, the firefighters tried to use personal emergency shelters — sort of a cross between a tent and a sleeping bag — to survive.

"They're a last-ditch effort. They're something that we train on, but it's not something that we rely on, in any case," Prescott Fire Department spokesman Wade Ward tells Fox 10 News. "The only thing that we can say is that it must have been a very unbearable situation and a last resort," he added, noting the firefighters' training and awareness of conditions.

"This fire was very radical in its behavior, the fuels were very dry, the relative humidity was low, the wind was coming out of the south, it turned around on us because of monsoon action this afternoon. That's what caused the deaths, the change in the radical behavior of the burning fuels."

The Arizona Republic puts the loss in historic perspective, reporting that "the Sunday incident is believed to be the deadliest firefighting toll in a wildfire since 1933, and the deadliest single event for firefighters since the Sept. 11, 2001, terrorist attacks."

The Granite Mountain Hotshots had worked on the nearby Doce fire in June, according to the Courier. It also fought fires in New Mexico this year.

"Yesterday, nineteen firefighters were killed in the line of duty while fighting a wildfire outside Yarnell, Arizona. They were heroes — highly skilled professionals who, like so many across our country do every day, selflessly put themselves in harm's way to protect the lives and property of fellow citizens they would never meet. In recent days, hundreds of firefighters have battled extremely dangerous blazes across Arizona and the Southwest. The federal government is already assisting, and we will remain in close contact with state and local officials to provide the support they need. But today, Michelle and I join all Americans in sending our thoughts and prayers to the families of these brave firefighters and all whose lives have been upended by this terrible tragedy."

Officials are promising an investigation into what happened. Yarnell Hill is one of several wildfires currently burning in the U.S. NPR's Fire Forecast app, which is updated daily, keeps track of reported wildfires. We'll embed it below. You can change the location by entering a new "ZIP code, city, etc."