Accessibility links
Why The Fort Hood Suspect Couldn't Plead Guilty To Murder : The Two-Way Even if he wanted to, Maj. Nidal Hasan was barred from entering a guilty plea to the 13 murder counts he faces in connection with a mass shooting in 2009. The Uniform Code of Military Justice prohibits such a plea in cases that could end with the death penalty. Experts say the code goes to great lengths to protect the individual's rights. 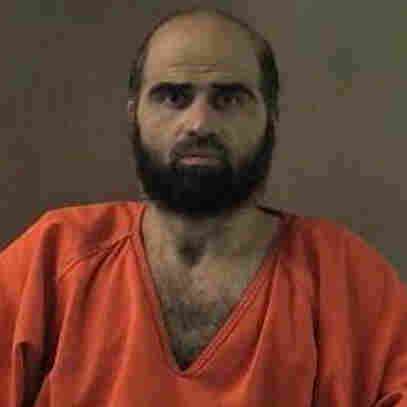 Maj. Nidal Hasan faces 13 charges of murder and 32 of attempted murder for the November 2009 shootings at Fort Hood. A Muslim, he has refused a judge's order to shave his beard, though it violates Army regulations. The trial will proceed, however. Bell County Sheriff's Office/Reuters/Landov hide caption

Nearly four years after the mass shooting at Fort Hood, Texas, in which 13 people were killed and 32 were wounded, the case against the Army psychiatrist who stands accused of the crimes got to the pleading stage Tuesday.

Maj. Nidal Hasan is charged with 13 counts of premeditated murder and 32 counts of attempted premeditated murder. According to reports from Reuters and other news outlets, Hasan refused to enter a plea in a Fort Hood courtroom. So, Col. Tara Osborn — the judge — entered a not guilty plea for him.

At one point in the months leading up to Tuesday's action, Hasan had indicated he might try to plead guilty — at least to the attempted murder charges. But even if he had wanted to, Hassan could not plead guilty to the murder charges. Why? Because prosecutors are pursuing the death penalty for those 13 killings, and the Uniform Code of Military Justice bars guilty pleas in such cases:

"A plea of guilty by the accused may not be received to any charge or specification alleging an offense for which the death penalty may be adjudged."

(WFAA-TV's Steve Stoler was posting updates from the courtroom on his Twitter page.)

In most civilian courts, a defendant could plead guilty even if the death penalty was at stake. Why is the code of military justice different?

When Congress crafted the code in 1950, lawmakers "did not want to subject a service member to capital punishment unless it was a unanimous decision by 12 jurors," says Geoffrey Corn. He's a professor at Houston's South Texas College of Law who was on active duty in the U.S. Army for 21 years and retired as a lieutenant colonel in the Judge Advocate General's Corps.

"It's such a grave and significant outcome that it wasn't felt the judgment should rely solely on the accused's plea," Corn adds. The prohibition, he says, was also a response to "the pre-Uniform Code of Military Justice perception that 'military justice' was an oxymoron."

John Altenburg, a retired major general who was an Army lawyer for 28 years and served as its deputy judge advocate general from 1997 to 2001, says there's "simply an abundance of caution ... and extreme paternalism" built into the code.

"The major thrust since World War II," Altenburg says, "has been to protect the rights of the individual. ... We're just not going to let somebody plead guilty" in death penalty cases.

While it had been thought that Hasan might say he wanted to plead guilty to the attempted murder charges, it wasn't guaranteed that the judge — Col. Tara Osborn — would have allowed him to do that either. "Military law experts" told The Associated Press that they believe she would deny his request and enter a plea of not guilty for him to those charges, as well. The thinking: It might be too difficult for him to get a fair trial on the murder charges if a jury knows he's already pleaded guilty to the lesser counts.

Corn, though, says it would have been unusual for a judge not to allow a guilty plea to lesser charges — if she was convinced, after extensive questioning, that Hasan is aware of what he's doing and has made the decision freely.

Prosecutors are expected to lay out what they say is evidence of Hasan's motivation for the crimes. Hasan, a Muslim, had been in contact with U.S.-born radical cleric Anwar al-Awlaki before the shootings. In September 2011, Awlaki was killed by a U.S. drone strike in Yemen.

Experts say the case against Hasan differs substantially from that of Army Staff Sgt. Robert Bales, who pleaded guilty to killing 16 Afghan civilians in a 2012 late-night rampage and could have faced the death penalty. Prosecutors agreed to a plea deal that avoided going to trial in large part because even though the case against Bales was substantial, "there was little forensic evidence," Altenburg says. According to Muslim tradition, the victims were buried within 24 hours of their deaths.

In addition, Corn says, "the Bales incident was far less calculated" than the Fort Hood killings.

For both reasons, prosecutors decided that they might not have been able to get all 12 jurors to agree that the death penalty was warranted.