Accessibility links
Giffords Reaches 'Responsible Gun Owners' At Firing Ranges : The Two-Way Severely wounded by a gunman in 2011, the Arizona Democrat is pushing to close the so-called gun show and Internet loopholes. She and husband Mark Kelly are taking their campaign directly to gun owners. 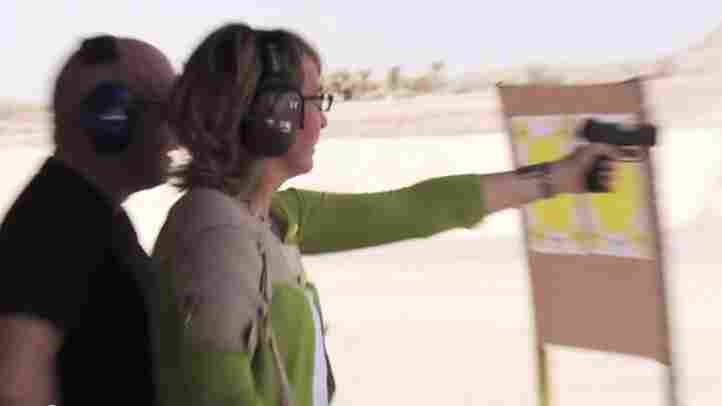 Former Rep. Gabrielle Giffords, D-Ariz., at a firing range in Nevada earlier this week. Her husband, retired astronaut Mark Kelly, was behind her. Americans for Responsible Solutions hide caption 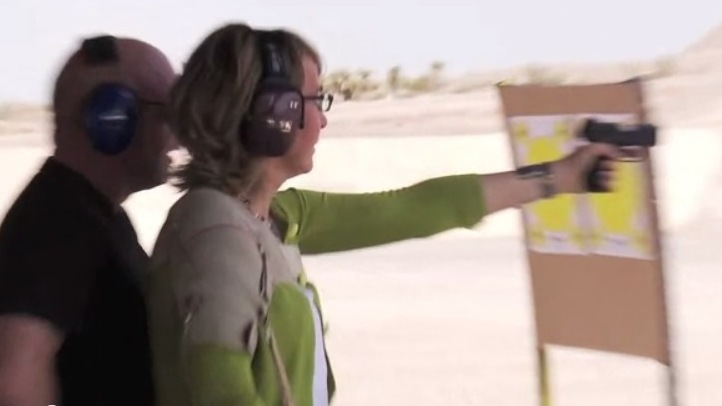 Former Rep. Gabrielle Giffords, D-Ariz., at a firing range in Nevada earlier this week. Her husband, retired astronaut Mark Kelly, was behind her.

Former Rep. Gabrielle Giffords who survived a January 2011 attack by a gunman that left 6 people dead and 13 others wounded (including the Arizona Democrat), has been in the news this week as she and her husband Mark Kelly take their "Americans for Responsible Solutions" campaign around the nation.

Videos of Giffords and Kelly at firing ranges have gotten wide play on news outlets. In this one, you can see Giffords herself firing a handgun. Both she and her husband are gun owners (and were before she was shot) and say they continue to enjoy shooting.

Their campaign aims to reduce gun violence by pushing lawmakers to close the so-called gun show and Internet loopholes that allow weapons to be purchased without background checks. They also want the databases that get checked to include more information about individuals who have mental issues.

On Weekend Edition Saturday, Kelly told NPR's Linda Wertheimer that "a firing range is where you find gun owners ... usually very responsible gun owners." That's why they've taken the campaign to ranges, he said. They're scheduled to be in Maine later on Saturday.

The National Rifle Association opposes moves, such as closing the loopholes, that would further tighten gun laws. It and other opponents say that could put gun laws on a "slippery slope" that would lead to infringements of American's Second Amendment rights.

But, "I have not seen the slope in Washington to be very slippery," Kelly said. "If anything, the slope is made of Velcro" — a product that the retired astronaut joked he knows something about since NASA helped make it famous.