Accessibility links
Death And Tax Evasion: The Strange Case Of Sergei Magnitsky : The Two-Way The whistle-blowing lawyer was found guilty by a Russian court even though he died in prison in 2009. The case seemingly was a first for Russia, but putting the dead on trial isn't entirely unprecedented in history. 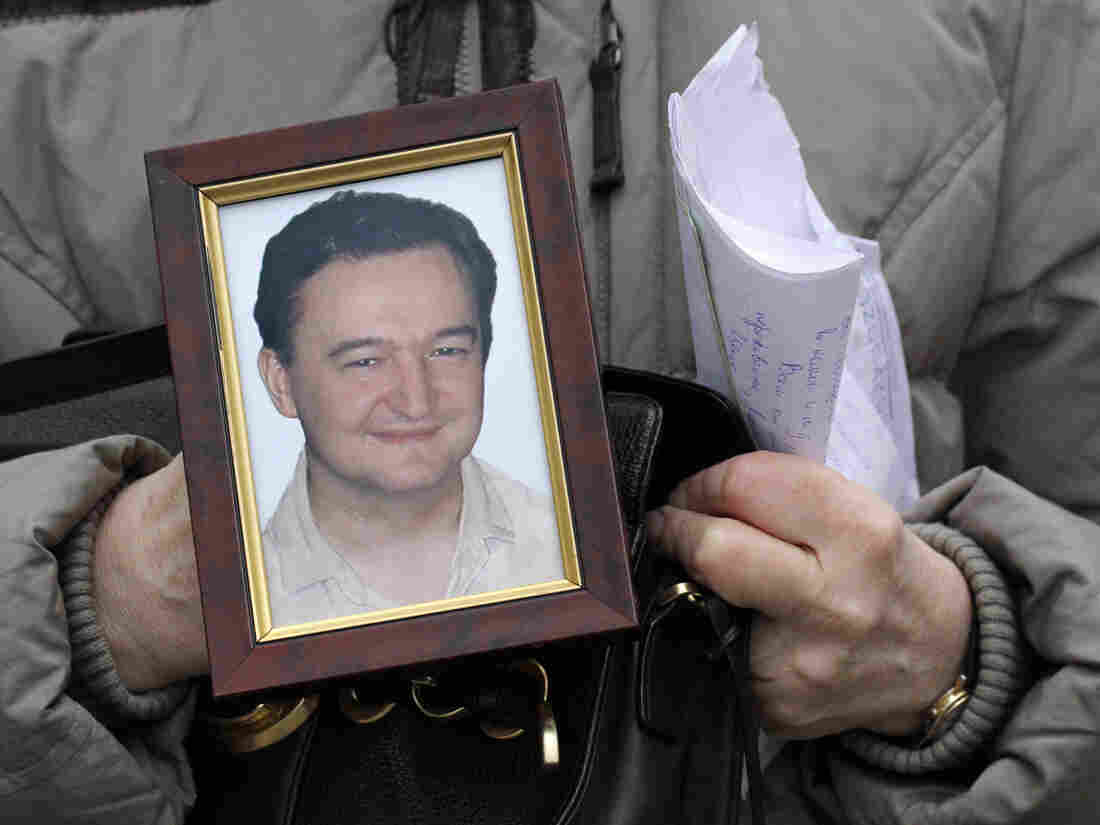 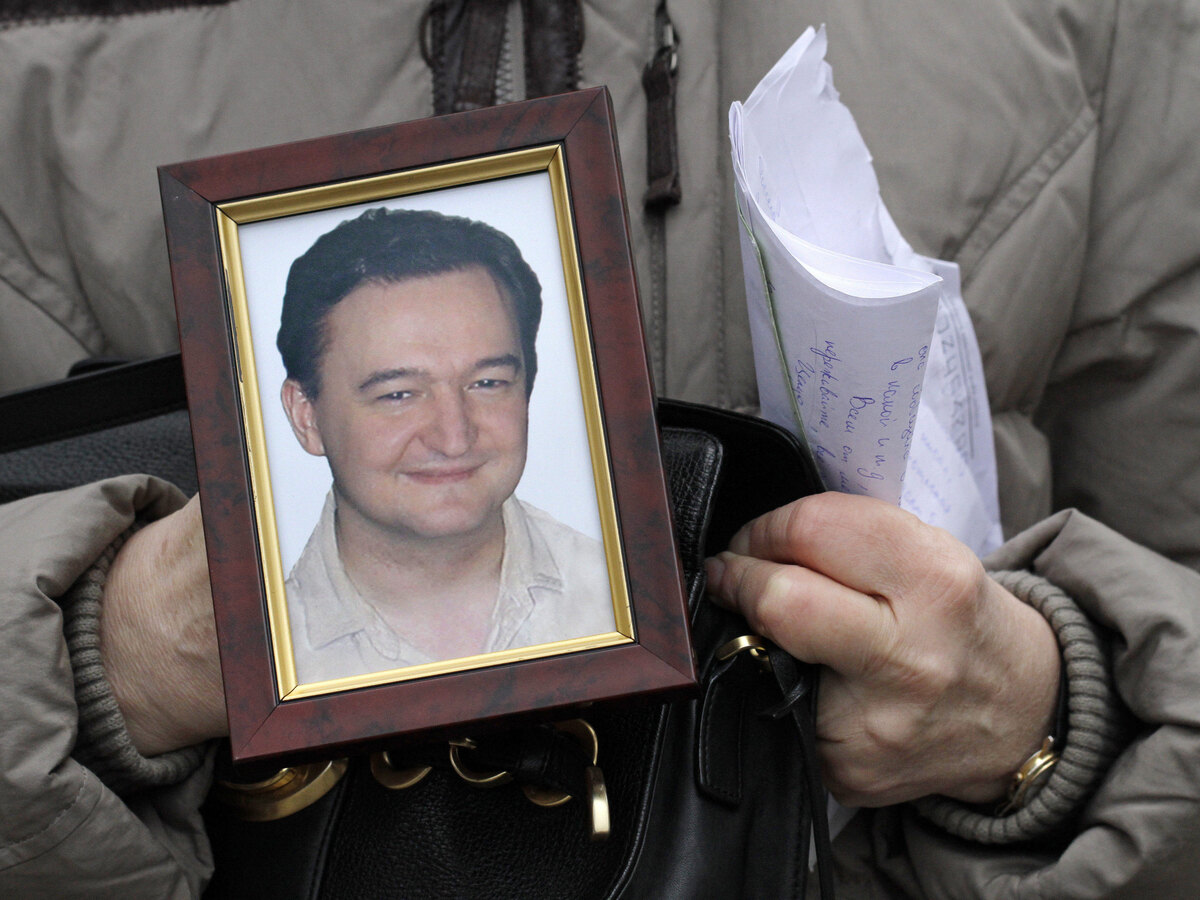 Sergei Magnitsky's mother, Nataliya Magnitskaya, holds a photo of her late son in 2009.

A Russian court found whistle-blower Sergei Magnitsky guilty of tax evasion on Thursday, ending a convoluted case that caused a diplomatic row between Moscow and Washington. It gets even more bizarre given the fact that the man on trial died in 2009.

The posthumous conviction is unprecedented in modern times – even in a country with a history of show trials. But it's not entirely unheard of throughout the ages.

Magnitsky, who died in prison of pancreatitis at age 37, had accused Russian officials of massive corruption and was himself subsequently accused of tax evasion. Human rights groups — including the Kremlin's human rights commission — concluded he had been beaten and denied medical care. The case became a cause célèbre, spurring Congress to pass the 2012 Magnitsky Act, which barred Russian human rights abusers from entering the U.S. In return, Russia banned American citizens from adopting Russian orphans.

Such a conviction is "highly irregular," says Paul Stephan, a University of Virginia law professor who is an expert on Soviet and post-Soviet legal systems. "I am unaware of any other country that has done it."

It's worth noting that a change in Russian law a few years ago did make it possible to exonerate someone postmortem, according to The Associated Press. Magnitsky's conviction seems to be the flip side of that legal coin.

And as the AP reports, there have been a handful of historical precedents. In the Cadaver Synod of 897 A.D., for example, Pope Formosus was found guilty of conspiracy in a trial in which his corpse was disinterred and put on the stand. And Pope Callixtus III ordered Joan of Arc to be retried decades after she was burned at the stake in 1431. (She was acquitted and later declared a saint.)

Stephan says Magnitsky's conviction appears to be "symmetrical" to the Gorbachev-era posthumous acquittals of people who had been convicted during the Soviet purge trials of the 1930s. However, he notes, "it's hard to think that this is not simply a deeply cynical way of doubling down on a very dubious claim — namely that Magnitsky had anything to do with tax evasion."

Even so, Stephan says it's hard to see the Magnitsky case as anything other than "a deeply cynical way of doubling down on a very dubious claim — namely that Magnitsky had anything to do with tax evasion."

NPR's Corey Flintoff, reporting from Moscow, points out that "the tax evasion case against Magnitsky was brought by the very officials that he had accused."

Magnitsky was convicted along with a former client named William Browder, who was sentenced in absentia to nine years in prison. He says Magnitsky was jailed in revenge for uncovering a $230 million tax fraud perpetrated by Russian officials.

"Today's verdict will go down in history as one of the most shameful moments for Russia since the days of Josef Stalin," Browder, who lives in Britain and is unlikely to be extradited to Russia, wrote in an emailed statement to Reuters.

Allan Hogarth of Amnesty International U.K. called it the "height of absurdity," the Financial Times reports. "The trial of a deceased person and the forcible involvement of his relatives has set a dangerous precedent that could open a whole new chapter in Russia's worsening human rights record," he said.

According to the Institute of Modern Russia, Magnitsky's conviction was made possible by a 2011 change in Russia law that was meant to cut in the opposite direction:

"Until 2011, there was a clause in Russia's Criminal Procedural Code under which a criminal case would be terminated in the event of the suspect's or defendant's death. There was only one exception to this rule — the case remained open if further investigation was necessary for the rehabilitation of the deceased. However, the law did not stipulate who had the right to petition for rehabilitation in such cases. The law was not interested in the opinion of the dead person's relatives. This situation changed, however, in 2011."