Accessibility links
Why We Aren't Assuming Snowden Is On That Jet To Havana : The Two-Way Seeing that an Aeroflot flight from Moscow was taking a very direct route to Cuba set off speculation. But it turns out that weather is a more likely reason for the path the plane is taking than the chance that the "NSA leaker" is on board.

Why We Aren't Assuming Snowden Is On That Jet To Havana

Why We Aren't Assuming Snowden Is On That Jet To Havana

Twitter has been abuzz with speculation that "NSA leaker" Edward Snowden is on Aeroflot Flight 150, which is headed to Havana from Moscow as we write.

FlightAware's live-tracking shows the jet is on a route that avoids going over the U.S., instead of the path it usually takes, above Greenland, Canada and the eastern U.S. 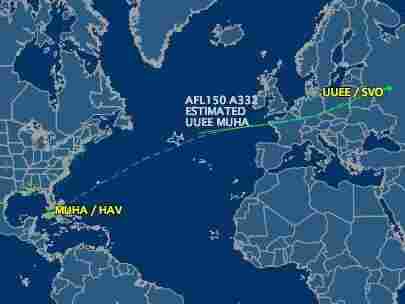 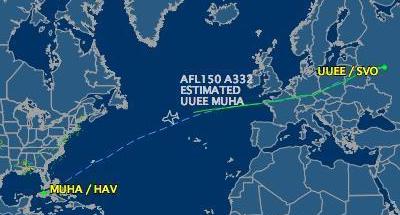 Could Russian authorities be doing Snowden a favor by avoiding the U.S. and the very remote possibility that the jet would be asked to land so that Snowden could be taken into custody?

Now, we're not smarter than most folks (as many Two-Way readers frequently remind us). But we thought the evidence was scant — especially after NPR's Matt Stiles checked Aeroflot 150's last 93 trips from Moscow to Havana and noticed that it had taken the more direct route two other times. So, this has happened before. 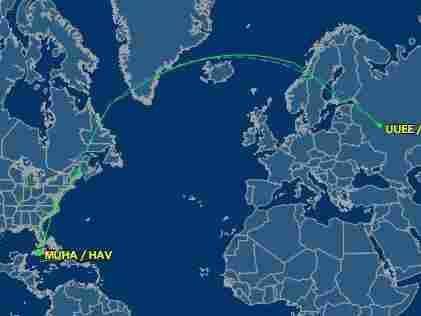 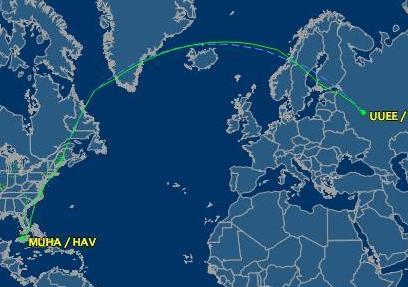 Then, as The Washington Post reports, it turns out that "a number of westbound trans-Atlantic flights are today taking this unusual southern route, apparently for weather-related reasons." There's turbulence over Greenland, it seems.

There's also the point that even on this southerly route the jet will still pass through U.S. airspace for at least several hours.

Of course, at some point Snowden almost surely has to leave the transit area of Moscow's international airport (where he's supposedly been for more than two weeks). As we've reported, he likely could get asylum in Boliva, Nicaragua or Venezuela, and Cuba is a key stop on the way there if he flies commercial.

And he does want to avoid coming to the U.S., where he's wanted for prosecution.

So we'll watch to see if there are stories about him getting off that plane in Havana, and we'll report that news if he does. The flight is scheduled to land around 8:25 p.m. ET.

Meanwhile, as with Tuesday's Twitter kerfuffle over whether Snowden had accepted Venezuela's asylum offer, we advise treating tweets with some skepticism.

As several readers pointed out, Thursday's route only looks more direct. Because of the Earth's curvature, it's actually not. We've deleted our misguided references to which way is shorter. Thanks for telling us, again, that we're not so smart.

FlightAware CEO has sent this statement to reporters:

"We are receiving a large volume of calls about Aeroflot 150, en route from Moscow to Havana asking if the Southern routing across the Atlantic Ocean is typical and asking if this routing avoids US airspace.

"Because of winds (which blow East), the flight generally takes a more Northern route, up over Iceland, through Canada, and down the Eastern seaboard. However, on days when the winds are light or unusual, it can be more favorable to take a more Southern route which also avoids the additional overflight fees from Canada and the U.S. The route being flown today is comparable distance to the Northern/Canada route, although it appears significantly more direct due to flat projections of a curved Earth. The flight duration today is about the same as the last couple weeks, which suggest they're taking this routing due to winds/overflight fees. The last two times we saw this flight take a similar route were June 20 and June 8.

"On the route it's flying today, it will fly in U.S. airspace; the U.S. controls most of the Western half of the North Atlantic. To actually avoid U.S. airspace, a flight from Moscow to Havana would likely have to fly South to (approximately) Western Sahara and then West, which would be about 30% further than either of the routings discussed above."