Accessibility links
Reactions To George Zimmerman's Acquittal In Trayvon Martin Case : The Two-Way Saturday night's acquittal of George Zimmerman is reigniting conversations that began with the 2012 fatal shooting of 17-year-old Trayvon Martin. The case has sparked debates on race, profiling and Stand Your Ground laws.

Judge To Zimmerman: 'You Have No Further Business With The Court'

Judge To Zimmerman: 'You Have No Further Business With The Court' 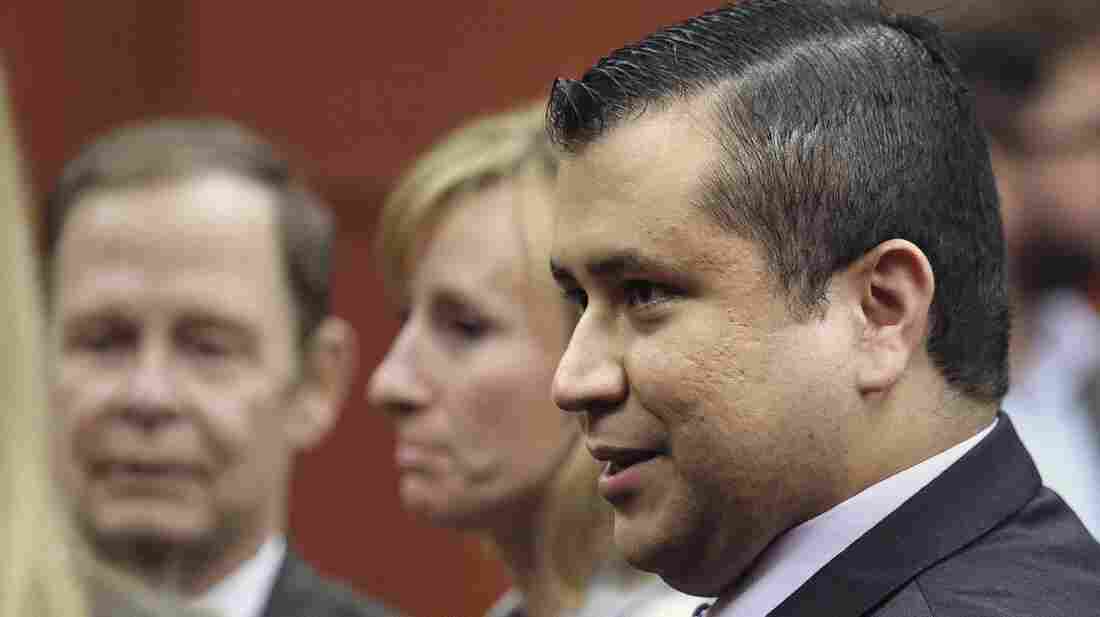 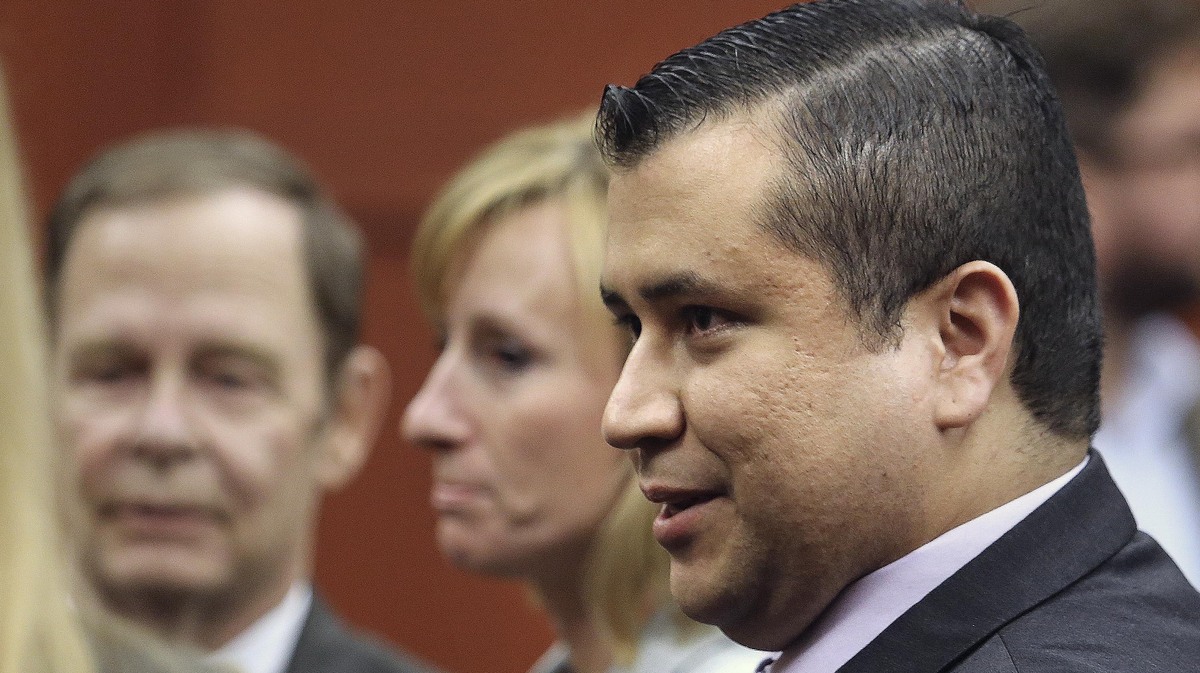 George Zimmerman leaves court with his family after Zimmerman's not guilty verdict was read in Seminole Circuit Court in Sanford, Fla. on Saturday.

The jury in the murder trial of George Zimmerman on Saturday acquitted the former neighborhood watch volunteer of all charges in the 2012 fatal shooting of 17-year-old Trayvon Martin during a scuffle in a gated Florida community.

The six-woman jury announced its verdict of not guilty at about 10 p.m. ET, after more than 16 hours of deliberations over two days.

"You have no further business with the court," Judge Debra S. Nelson of Seminole County Court in Sanford, Fla., told Zimmerman, before telling him he was free to go.

In a series of tweets reacting to the verdict, Martin's father, Tracy Martin, said he was "broken hearted," but thanked everyone who will "make sure this doesn't happen again."

As we told you earlier Saturday, Zimmerman, 29, had been charged with second-degree murder and manslaughter in the shooting of the unarmed African-American teen whose death shed light on Florida's "Stand Your Ground" law. Zimmerman had claimed self-defense in the shooting, and said it occurred during a sidewalk fight.

Prosecutors had portrayed Zimmerman as a "wannabe cop" who "profiled" Martin and "automatically assumed that Martin was a criminal" even though the youth was not trespassing in the gated community where the deadly confrontation took place.

NPR's Greg Allen, who is reporting on the trial for our Newcast unit, reports that Zimmerman showed no reaction at Saturday's verdict. His mother and wife began crying.

The Associated Press reports that when the verdict was announced, supporters of Martin's family gathered outside yelled, "No! No!"

"We're ecstatic with the results," defense attorney Mark O'Mara said after the verdict, according to the AP. "George Zimmerman was never guilty of anything except protecting himself in self-defense."

Florida Attorney General Angela Corey said her team of prosecutors did their best in the case: "We believe we brought out the truth on behalf of Trayvon Martin," she said.

We'll have more reactions as they come in through the night, and NPR's Code Switch team, which covers race, ethnicity and culture, also is following the reactions to the verdict on its Twitter feed.

NPR's Karen Grigsby Bates, who's part of our Code Switch team, went to report on a protest rally in Los Angeles. She tells us some protesters wore hoodies — in apparent tribute to Martin. But, Karen says, only a few people turned up to the protest against the verdict.

The verdict has prompted a lively debate on NPR's website — with more than 400 comments so far.

"One thing I don't understand is what was the young man supposed to do when approached by an armed guy on the side of he road? Black, white, whatever, if a guy with no obvious authority stops anybody on the side of the road in an accusatory manner, exactly what could they say to put them at ease?"

That's the top-rated comment on the story — and the responses to it include:

"Since the guy was twice his age... maybe a "Hello, how are you tonight sir?", "just on my way home, is everything ok for you? is your car ok? you need some help with a tire?" ... that's the SAFEST things to SAY. Then when confronted, respectfully chat. I don't know... those are the best things I can come up with. Oh, you don't need obvious authority to show respect towards one another. Age is usually the first indicator of who stands where in the respect level among citizens in America. That's of course, if you don't have any other way to view the person. Generally, age. I usually notice if the person is a little older or not, which helps guide me on the required respects and formalities during my conversation with someone.

"America is scared all the time, so everyone is a threat to each other. This is the difficulty we have to live with being a diverse country. but regressing to simple pleasantries is the safest thing to do. To prevent this from happening to more youth.. I advise all to stay closer to home and not be out when it gets too dark. It 's dangerous anyhow... its harder to identify people at night. enjoy your weekend. Hopefully things work out. I'm sorry for the loss of TM, and wish things went better"

And from h a, we have this response to Brian's question:

"B free, yours is the best comment ever on this story. I wish the prosecuting attorney had made the same comment. I guess the only thing anyone could say in that situation is "OK, call the police."

Lord during my darkest hour I lean on you. You are all that I have. At the end of the day, GOD is still in (cont) https://t.co/enQjZ3bZk2

Late last night, NPR's Gene Demby asked this of his followers on Twitter:

Did anyone watch the verdict with their children? What did you say to them? What did they say you? #ZimmermanTrial

You can read responses to his call-out on Code Switch's Storify page.

Update at 12:53 a.m. Marches Against Verdict

There have been reports of protest marches against the verdict in several cities, including Washington, D.C., and San Francisco.

Robert Zimmerman, Zimmerman's brother, tweeted his reaction, "Today, I'm proud to be an American," he said.

Message from Dad: "Our whole family is relieved". Today... I'm proud to be an American. God Bless America! Thank you for your prayers!

Robert Zimmerman appeared on CNN's Piers Morgan Live soon after the verdict Saturday and said his brother will be looking over his shoulder:

"There are factions, there are groups, there are people that would want to take the law into their own hands as they perceive it, or be vigilante's in some sense," he told Morgan during the live interview. "They think that justice was not served, they won't respect the verdict no matter how it was reached and they will always present a threat to George and his family."

MSNBC host and civil rights activist Al Shaprton in a statement called Zimmerman's acquittal "a slap in the face to the American people."

"We intend to ask the Department of Justice to move forward as they did in the Rodney King case and we will closely monitor the civil case against Mr. Zimmerman," he said.

The NACCP says it wants the Justice Department to file civil rights charges in the case.

On its website, it says: "Demand justice for Trayvon. Tell the Department of Justice to file civil rights charges."

Martin's mother, Sybrina Fulton, said God was "all that I have."

Civil rights leader Jesse Jackson tweeted: "Avoid violence, it will lead to more tragedies. Find a way for self construction not deconstruction in this time of despair."