Accessibility links
Rolling Stone's Tsarnaev Cover: What's Stirring Such Passion? : The Two-Way The magazine hasn't hit newsstands, but some say it glorifies alleged Boston bomber Dzhokhar Tsarnaev. Rolling Stone's editor stands by the use of the photo to help tell the story of "an incredibly normal kid" who turned into "a monster."

(Click here to see an excerpt from the Rolling Stone story.) 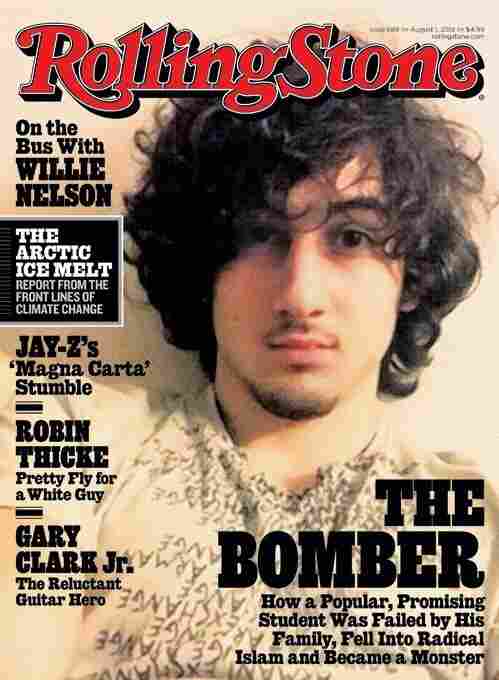 Even before it hit newsstands, Rolling Stone's latest cover caused controversy: It features a full-page photograph of alleged Boston bomber Dzhokhar Tsarnaev sulking, his curly hair messily tossed in front of his eyes.

As soon as Rolling Stone posted the cover on Facebook, it was inundated with negative comments: "I think it's wrong to make celebrities out of these people. Why give the guy the cover of Rolling Stone?" one Facebook user said, echoing thousands of others.

The editor of the liberal Think Progress tweeted that the cover turned Tsarnaev "into Jim Morrison."

Others opined that the cover wasn't offensive, just "uninspired."

The controversy prompted CVS and the New-England based Tedeschi Food Shops to say they will not carry the magazine in their stores.

(Click here to read our update about why Rolling Stone's managing editor stands by the magazine's decision.)

Stefan Becket, who works for New York Magazine, seemed to be wondering what the big deal was because The New York Times used the same picture for a Sunday cover back in May.

We have to admit that what also caught our attention was the accompanying blurb promoting the lengthy profile by contributing editor Janet Reitman.

"How a Popular, Promising Student Was Failed by His Family, Fell Into Radical Islam and Became a Monster," it reads.

That reminded us of a piece David J. Leonard, a professor specializing in race studies at Washington State University, wrote for Gawker following the Newtown shootings.

Essentially, Leonard argued, white men are profiled as innocent by society, and when something goes wrong, something outside of them must be to blame. Leonard was reacting to the portrayal of Adam Lanza as a quiet and bright boy described as "nice" by some. 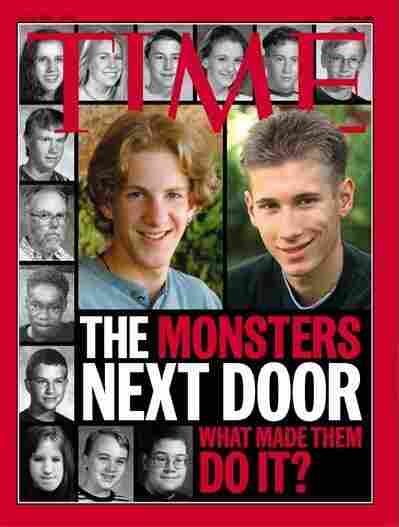 "When I was pulled over in Emeryville, CA for speeding for several miles and asked multiple times by the police officer if there was a reason for my speeding, I told him the truth. 'Officer, my ice cream is melting.'

"No stop and frisk. No pretext stop. No humiliating search. No fear of how to hold my hands. No ticket. I, like Adam Lanza and James Holmes, the two most notorious mass shooters of the past year, am white male privilege personified. We are humanized and given voice and innocence over and over again. ...

"The national spectacle and the hyper focus on Newtown and Aurora especially in comparison to the scant coverage afforded to murders in Chicago or drone deaths in South Waziristan points to the value of whiteness. School shootings and other mass killings matter when there are white victims. Whiteness is thus reimagined as under attack. White suburban kids, white suburban families, white suburban communities and even white shooters are the victims — victims of Hollywood, victims of gun laws that don't allow them to protect themselves in every context, victims of removal of prayer from public schools, and victims of soiling culture."

To be fair, Rolling Stone's full story is not yet available as we publish this post. (Note at 5:30 p.m. ET: It's now online here.) But the framing of the story follows the pattern Leonard is talking about. It's a narrative reminiscent of one put forth by Time magazine's cover featuring Columbine shooters Dylan Klebold and Eric Harris. The headline asked: "The Monsters Next Door. What Made Them Do It?"

We reached out to Leonard because we're guessing the Tsarnaev case puts wrinkles in his thinking. The Tsarnaev brothers, after all, represent an unlikely middle for America. They're white, but Muslim.

We'll update this post once we hear back from Leonard on that point. Meanwhile we ask you: Is the Rolling Stone cover ill-conceived? What do you think about the framing?

Now that it's posted online, you can see what Rolling Stone is writing. This passage seems to sum up much of what managing editor Will Dana said earlier about the piece:

" 'Listen, [says Peter Payack, Tsarnaev's wrestling coach in high school] there are kids we don't catch who just fall through the cracks, but this guy was seamless, like a billiard ball. No cracks at all.'

"And yet a deeply fractured boy lay under that facade; a witness to all of his family's attempts at a better life as well as to their deep bitterness when those efforts failed and their dreams proved unattainable. As each small disappointment wore on his family, ultimately ripping them apart, it also furthered Jahar's own disintegration — a series of quiet yet powerful body punches. No one saw a thing. 'I knew this kid, and he was a good kid,' Payack says, sadly. 'And, apparently, he's also a monster.' "

Update at 3:40 p.m. ET. It Was An "Apt Image" For An Important Story, Rolling Stone Managing Editor Says:

Saying that the cover photo is an "apt image because part of what the story is about is what an incredibly normal kid [Tsarnaev] seemed like to those who knew him best back in Cambridge [Mass.]," Rolling Stone managing editor Will Dana talked with All Things Considered host Melissa Block this afternoon.

"I am completely comfortable about the decision that we made," he said of the cover photo.

Dana sees the story Rolling Stone told as one of how a "seemingly normal, well-adjusted guy who appeared to be on a path — if not to achievement — at least to success" turned into "a monster" instead. And he believes that "if people read the story they'll see that there's nothing in here that's trying to build him [Tsarnaev] up as a hero."

We'll add the as-broadcast version of the interview with Dana to the top of this post later today.

Professor Leonard emailed us with these thoughts:

"Beyond the fact that I don't think the cover 'glorifies' Tsarnaev or portrays him as a rock star, I think the controversy focuses on the wrong issue. ... [The question should be] why is there an effort to explain how a 'promising student was failed by his family, fell into radical Islam and became a monster.' Or better said, how a suburban white [boy] (from the Caucus region) came to commit such heinous crimes. The picture and the headline operates through this vision that he was good, he was the boy next door, and that something changed him. The picture in this regard (as it was a picture from before the bombing) harkens his past, what he was like before his turn toward evil. It fits the common narrative afforded to the suburban, white male domestic terrorists.

"At the same time, I wonder how much outrage the Columbine cover you referenced or the covers picturing Adam Lanza or [alleged Aurora, Colo. shooter] James Holmes elicited in terms of 'glorification' and turning 'killers into celebrities.' The fact that the images of these individuals did not prompt outrage reflects a willingness to see a level of innocence and how race, class, and religion all plays out here. This shows how many readers don't see Tsarnaev as white; he is different in their imagination from Lanza, Holmes, Kleebold and others."