Accessibility links
U.S. Is 'Through The Worst Of Yesterday's Winds,' Obama Says : The Two-Way With a speech that echoed many of those given in his 2008 and 2012 campaigns, the president launched another effort to lay out his vision for how to strengthen the U.S. economy.

U.S. Is 'Through The Worst Of Yesterday's Winds,' Obama Says

U.S. Is 'Through The Worst Of Yesterday's Winds,' Obama Says 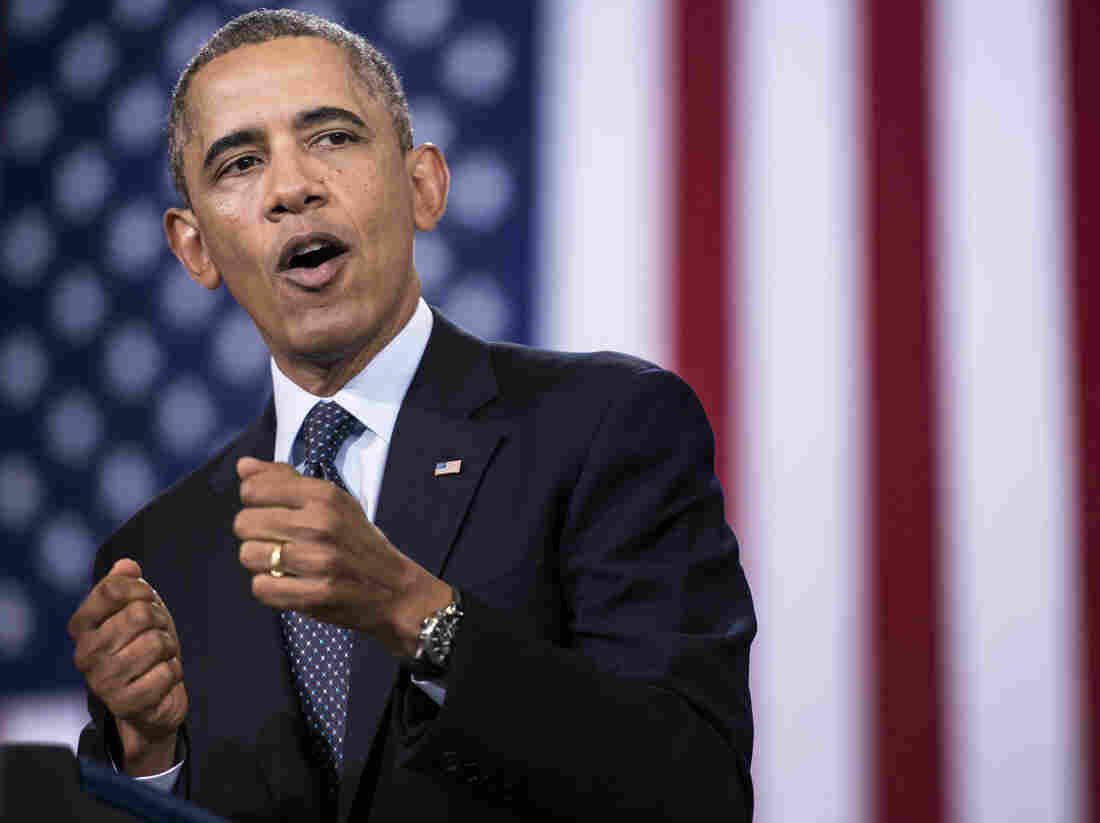 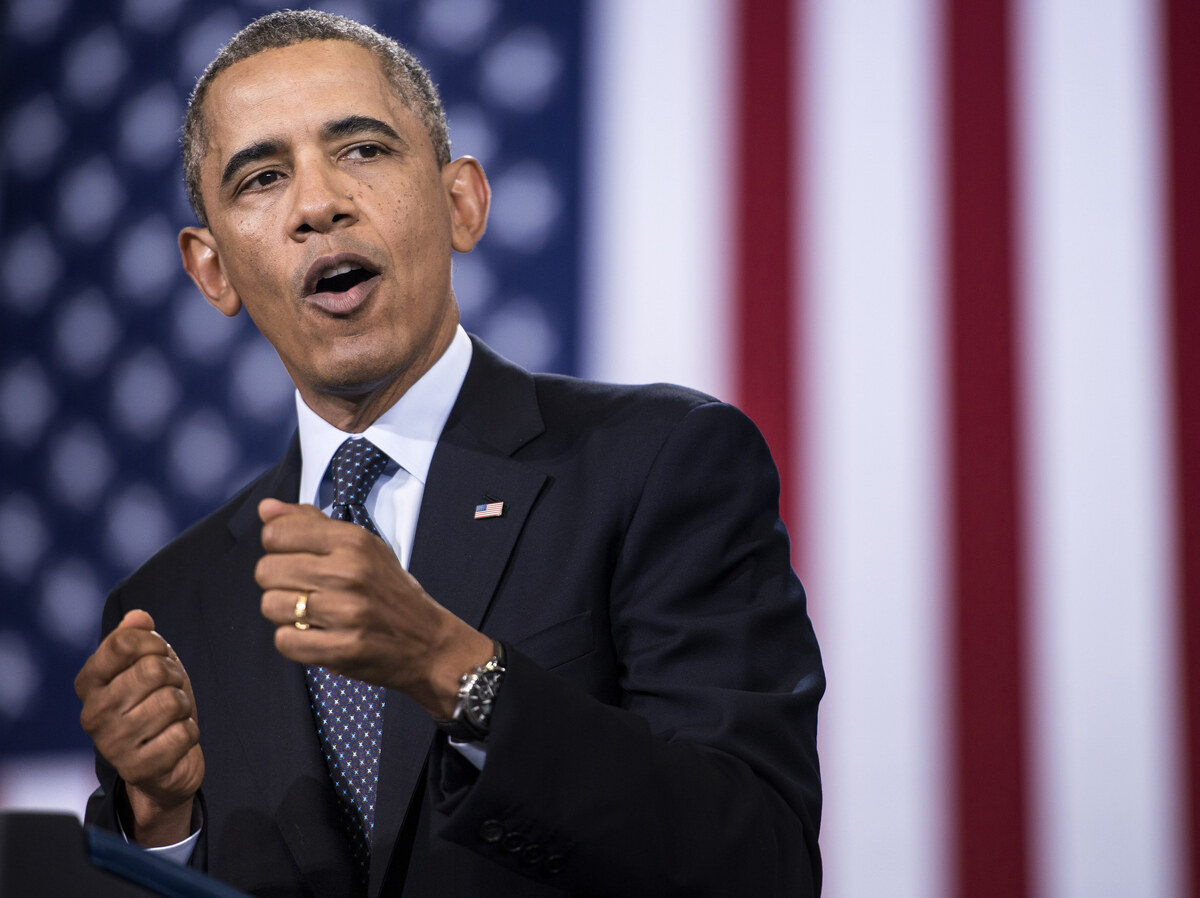 President Obama during his address Wednesday at Knox College in Galesburg, Ill.

President Obama on Wednesday launched another effort to lay out his vision for how to strengthen the U.S. economy with a midday speech at Knox College in Galesburg, Ill., in which he hit themes familiar to those who followed his 2008 and 2012 presidential campaigns.

While focusing on issues such as the need to continue overhauling the nation's health care system, to make education more affordable, to fix bridges and other infrastructure and to create solid, well-paying jobs, Obama also criticized those Republicans in Washington who he believes have been focused on "political posturing and phony scandals."

We followed along and posted updates. Late this afternoon, Obama is due to speak in Warrensburg, Mo., at the University of Central Missouri.

As he finishes, Obama quotes poet Carl Sandburg, who was born in Galesburg:

"I speak of new cities and new people ... The past is a bucket of ashes ... yesterday is a wind gone down, a sun dropped in the west ... there is ... only an ocean of tomorrows, a sky of tomorrows."

"America," Obama continues, "we have made it through the worst of yesterday's winds. We just have to have the courage to keep moving forward; if we set our eyes on the horizon, we too will find an ocean of tomorrows, a sky of tomorrows – for America's people, and for this great country that we love."

"No matter who you are, what you look like, where you come from or who you love — you can make it if you try," Obama says.

The president says he cares "about one thing and one thing only ... how to use every minute of the remaining 1,276 days of my term to make this country work for working Americans again."

After talking about reaching out to Republicans and criticizing them for only being against ideas rather than for them — things he also talked about a lot in the 2012 campaign — Obama has particularly sharp words about the several dozen times House Republicans have voted to eliminate "Obamacare":

"If you think you have a better plan for making sure every American has the security of quality, affordable health care, stop taking meaningless repeal votes and share your concrete ideas with the country."

"Because no one who works full-time in America should have to live in poverty," Obama says, "I will keep making the case that we need to raise the minimum wage because it's lower right now than it was when Ronald Reagan took office."

That draws one of the biggest cheers from his audience.

The reason not to raise the minimum wage, say the president's critics, is that doing so might make businesses less likely to add workers and more likely to send jobs overseas.

"I've asked Congress to pass a really good, bipartisan idea — one that was championed by Mitt Romney's economic adviser," Obama says, "and this is the idea to give every homeowner the chance to refinance their mortgage while rates are still low so they can save thousands of dollars a year." It would be like giving those homeowners a tax cut, he adds.

"If you think education is expensive, wait until you see how much ignorance costs in the 21st century," Obama says while striking another theme he hit often in his presidential campaigns.

The president spends time in his address on subjects he talked about in the 2008 and 2012 campaigns — "good jobs in wind, solar, and natural gas," rebuilding the nation's infrastructure and how in "an age when jobs know no borders, companies will also seek out the country that boasts the most talented citizens" and reward them "with good pay."

"With this endless parade of distractions, and political posturing and phony scandals, Washington's taken its eye off the ball," Obama continues. "And I am here to say this needs to stop. Short-term thinking and stale debates are not what this moment requires. Our focus must be on the basic economic issues that the matter most to you — the people we represent."

The president speaks of "growing inequality," which he says "isn't just morally wrong; it's bad economics."

"Unfortunately, over the past couple of years in particular," he says, "Washington hasn't just ignored this problem; too often, Washington's made things worse."

Obama says that a "sizable group of Republican lawmakers suggest they wouldn't vote to pay the very bills that Congress rang up — a fiasco that harmed a fragile recovery in 2011, and one we can't afford to repeat."

Though he believes the economy is on the mend, Obama says: "we're not there yet. Even though our businesses are creating new jobs and have broken record profits, nearly all the income gains of the past ten years have continued to flow to the top 1%. The average CEO has gotten a raise of nearly 40% since 2009, but the average American earns less than he or she did in 1999. And companies continue to hold back on hiring those who have been out of work for some time."

After using the first few minutes of his address to run through the problems the economy was having when he took office, Obama says that "today, five years after the start of that Great Recession, America has fought its way back."

According to the Bureau of Labor Statistics, there are about 2.2 million more jobs on payrolls than when Obama took office. There are still, though, about 2.2 million fewer jobs than there were at the recent peak — January 2008 — shortly after the start of the last recession.

Running about 15 minutes late, the president just came to the microphone.