Accessibility links
Sold! First Parcels Auctioned For Future Offshore Wind Farms : The Two-Way The federal government held its first ever auction for the right to build offshore wind farms on Wednesday. After 11 rounds, a Rhode Island company was the highest bidder, at $3.8 million. 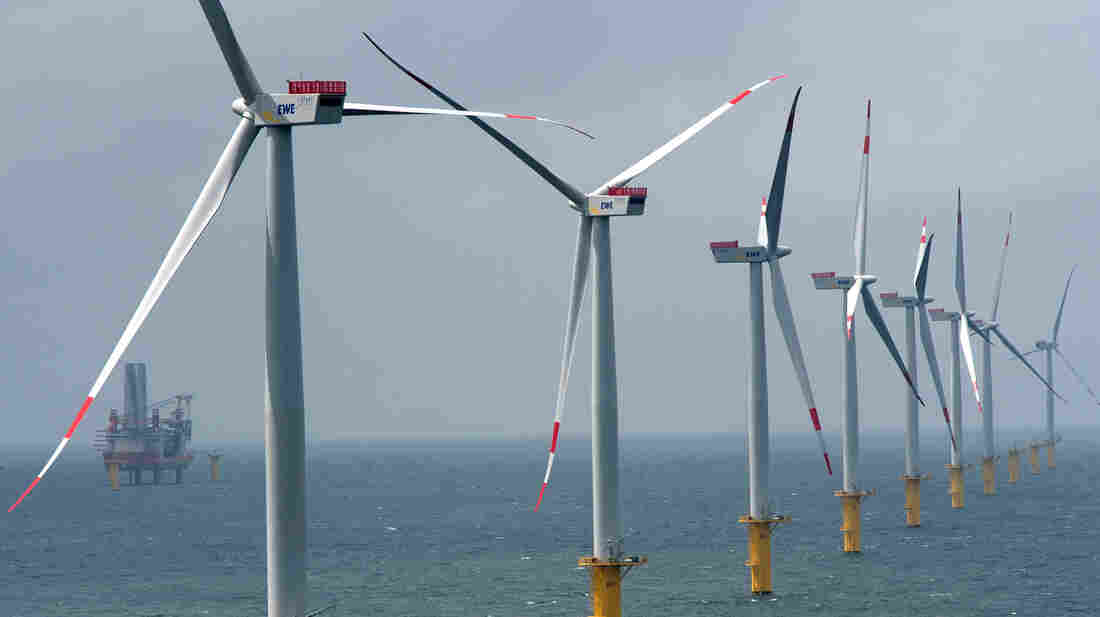 The offshore wind farm in the North Sea near Borkum, Germany, is nearly complete. The Riffgat facility, seen here on June 23, includes 30 turbines, each with a generating capacity of 3.6 megawatts. David Hecker/Getty Images hide caption

A Rhode Island company was the highest bidder in the federal government's first-ever auction for the right to build an offshore wind farm.

After 11 rounds, Deepwater Wind outbid two other companies for two patches of ocean off the coasts of Massachusetts and Rhode Island. The winning bid was $3.8 million. 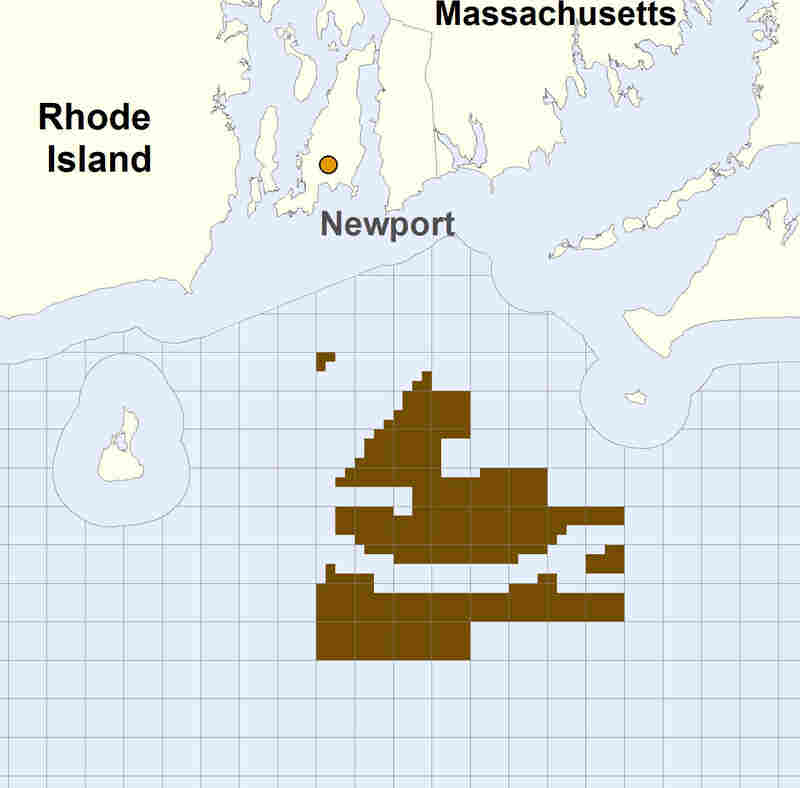 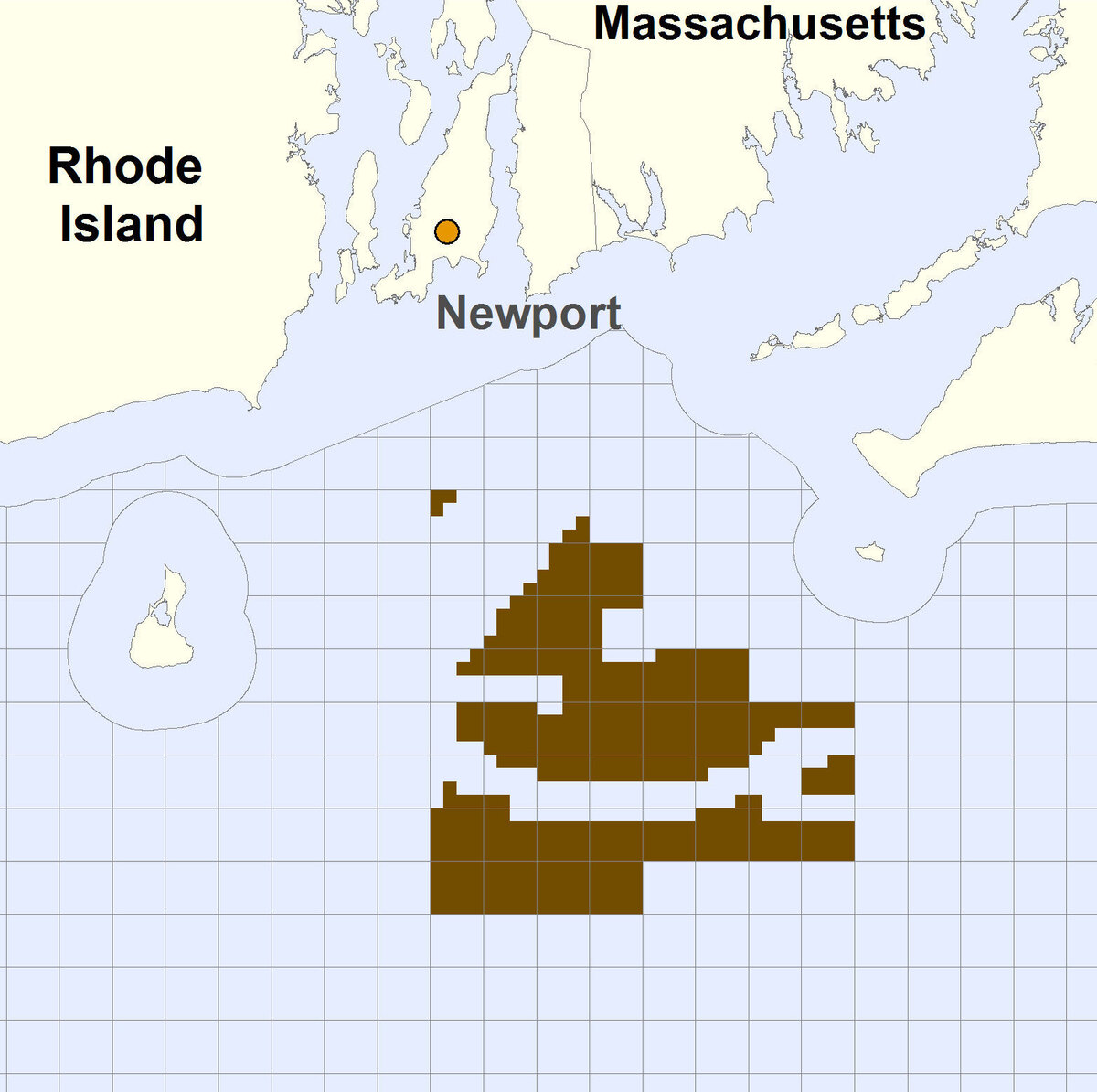 The Rhode Island and Massachusetts Wind Energy Area covers more than 250 square miles about 10.5 miles south of the Rhode Island coastline. The area is divided into two lease areas.

Not as many companies participated in the bidding as was expected, but industry representatives and government officials heralded the outcome as a sign that offshore wind power is on its way.

"This sale marks a really historic moment in the clean energy future of this country," said Tommy Beaudreau, director of the Bureau of Ocean Energy Management, which is part of the Interior Department.

The United States has no offshore wind farms, but some industry experts say the fact that there was competition for these leases shows that despite all the setbacks, the offshore wind industry might soon take off.

"The resource is too big to be ignored for very much longer," says Todd Griset, an attorney who advises clients on ocean energy projects.

However, the two most prominent would-be wind projects — Cape Wind, off the coast of Massachusetts' Cape Cod, and NRG Bluewater Wind off Delaware — have met one setback after another. The Delaware project is on hold and the Massachusetts one is snarled in litigation.

The winner of Wednesday's auction secures the sole right to develop the 165,000 acre lease area. But there is no guarantee it will actually install wind turbines.

"When they win a lease from us, they then basically have what I consider a dinner reservation," says Maureen Bornholdt, who oversees offshore renewable energy projects for the federal Interior Department.

Winning companies will have four years to design a project and study its environmental effects.

It probably will take at least five years before any wind turbines will be erected for these projects, according to Jim Lanard, the president of the Offshore Wind Development Coalition.

Another auction is scheduled for Sept. 4 for a possible wind project off the coast of Virginia, and Bornholdt says more auctions are in the works for patches of ocean off the coasts of of Maryland, Massachusetts and New Jersey.

Some environmental groups cheered the auctions as a sign that the country is moving toward cleaner energy.

"Responsibly harnessing the power of the wind blowing off our coasts is critical for cutting pollution and re-powering America with clean, renewable energy," said Courtney Abrams of Environment America.