Accessibility links
U.S. Unemployment Sinks To 7.4 Percent; 162,000 Jobs Added In July : The Two-Way The drop in the U.S. unemployment rate surpassed expectations, but the increase of only 162,000 jobs came in below projections. Hourly earnings for all workers on private nonfarm payrolls fell 2 cents last month. 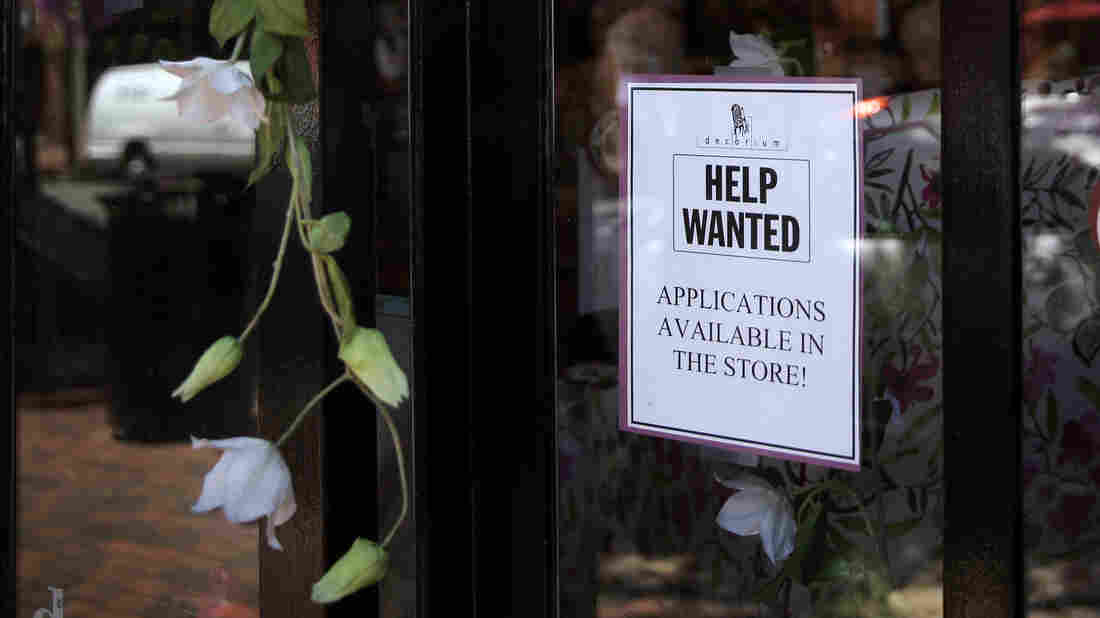 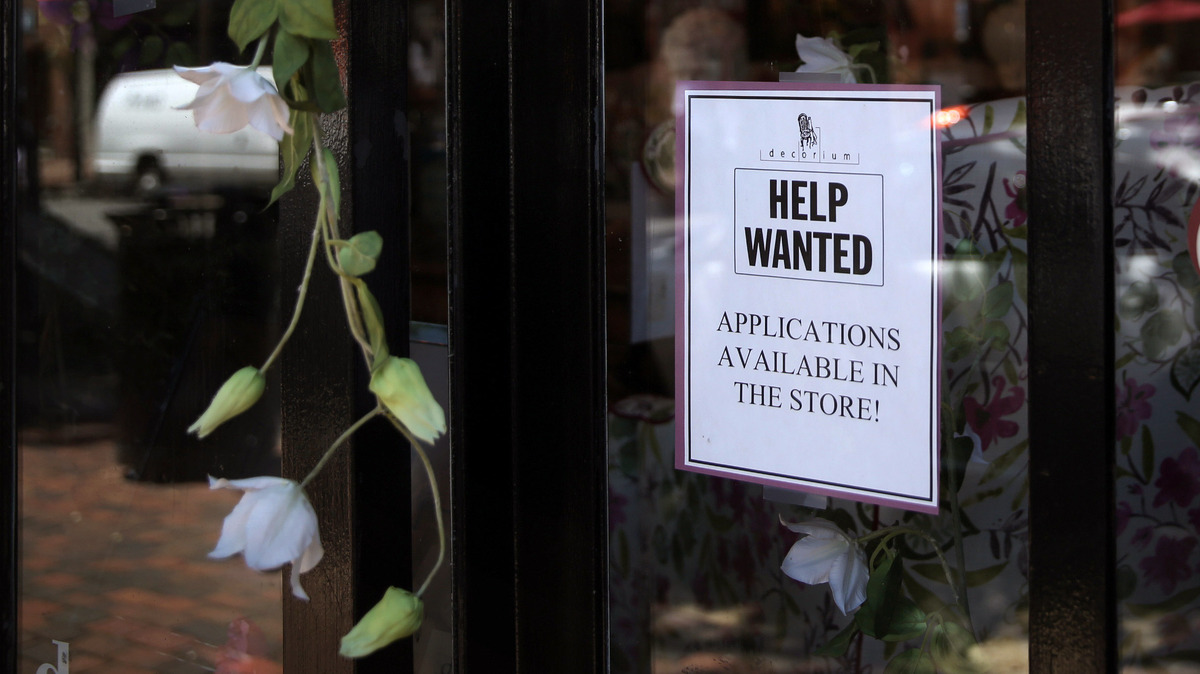 America's unemployment rate sank to 7.4 percent in July, the Bureau of Labor Statistics says. A hiring sign is seen in a store window in Alexandria, Va.

America's unemployment rate sank to 7.4 percent in July, a drop of two-tenths of a percent, the Bureau of Labor Statistics says in its monthly summary of the U.S. economic situation. But employers added 162,000 jobs last month, coming in below economists' expectations.

"Total nonfarm payroll employment increased by 162,000 in July, with gains in retail trade, food services and drinking places, financial activities, and wholesale trade," the report states. "Over the prior 12 months, nonfarm employment growth averaged 189,000 per month."

Barclays Capital economist Peter Newland called it "a clearly weaker-than-expected report," The Associated Press reports. He adds: "But one should not overstate it — the unemployment rate continues to trend down and average job growth of 175,000 will be more than enough to continue to push it lower."

Alan Krueger, chairman of the Council of Economic Advisers, said the numbers are fresh evidence that the economy continues to rebound from the recession, and stresses the need for policies to spur job creation and help the middle class.

"The surveys also show many economists think the unemployment rate will tick down a tenth of a percent, to 7.5 percent," John said. Friday's numbers outpaced that projection.

Friday's report from the Bureau of Labor Statistics includes two downward revisions of recent monthly jobs reports, with results for June changed from a gain of 195,000 nonfarm jobs to a gain of 188,000, and May's figure changed from 195,000 new jobs to 176,000.

Last month, the BLS reported that employers added 195,000 new jobs to public and private payrolls in June, but the unemployment rate did not budge, staying at 7.6 percent.

The new figures come days after the payroll firm ADP said that U.S. companies added 200,000 new jobs from June to July — a gain that showed businesses "hired in July at the fastest pace since December," The Associated Press said.

The U.S. economy has been a source of good news this week, as the latest gross domestic product data showed that the economy grew at an annualized rate of 1.7 percent in the second quarter in 2013, beating analysts' expectations.

The Standard & Poor's 500 index of large U.S. companies closed at a new high Thursday, after crossing the 1,700 mark for the first time in its history.

Employment data does not always fit together perfectly. As Mark Memmott wrote in The Two-Way last month:

"One part of the explanation is that the numbers are based on different surveys. Employers are quizzed about how many jobs they have — that produces the payroll employment data. Households are questioned about who's working and who's not — that produces the jobless rate. Two surveys can mean two different views of what's happening."

A Planet Money report for today's Morning Edition looks at "Four Reasons Why Millions Of Americans Are Leaving The Workforce."