Accessibility links
Baseball Suspends Alex Rodriguez For 211 Games : The Two-Way The league also announced 50-game suspensions against 12 other players because their names allegedly show up on customer lists at Biogenesis, a South Florida clinic that distributed performance-enhancing drugs. 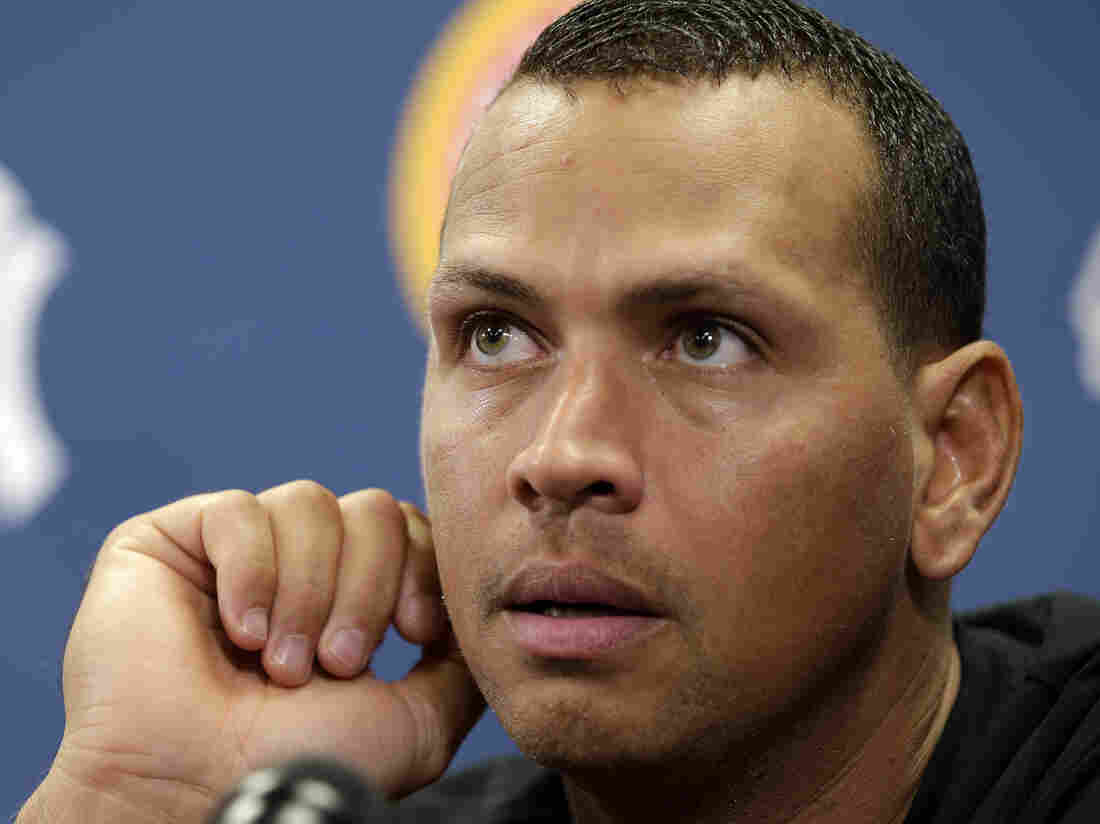 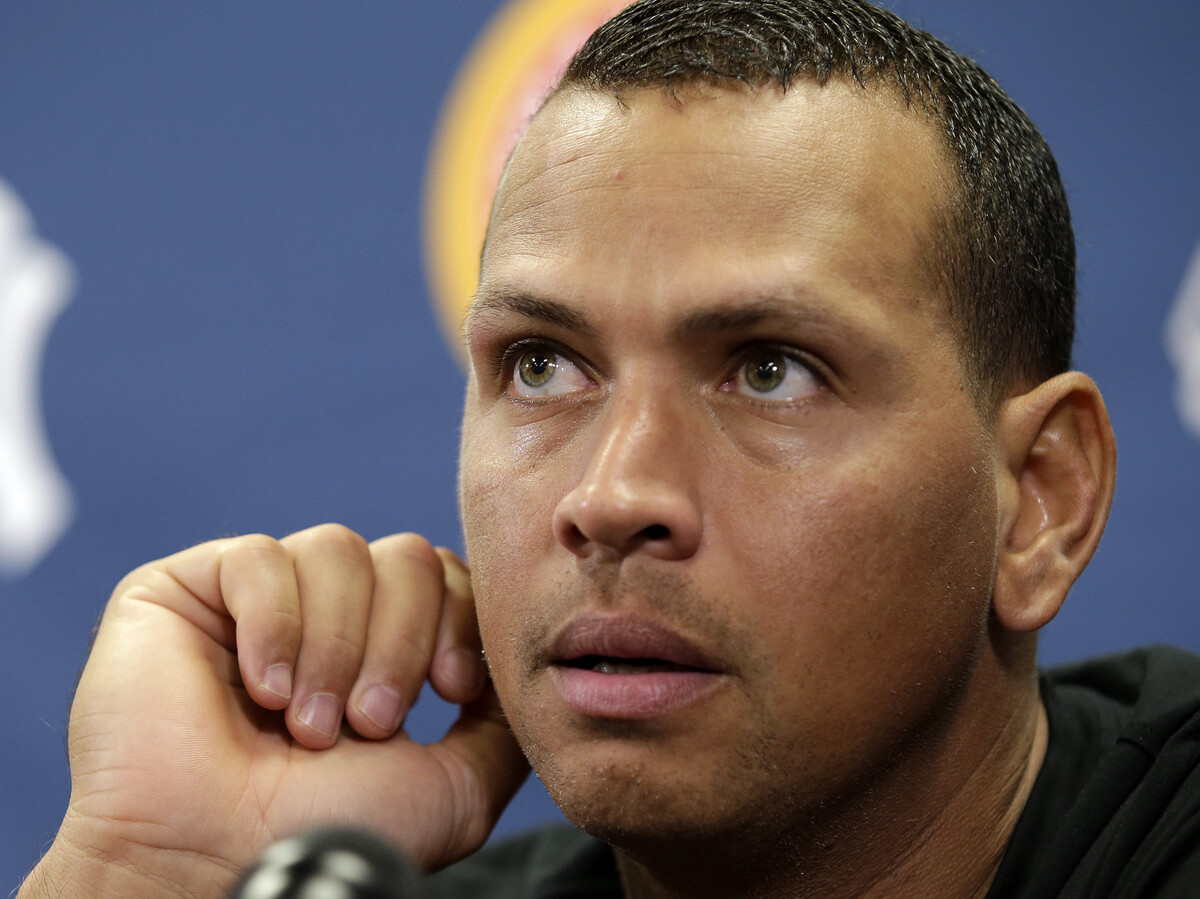 New York Yankees' slugger Alex Rodriguez, one of baseball's brightest stars and its highest-paid player, will be suspended through the 2014 regular season because he violated parts of baseball's Joint Drug Prevention and Treatment Program, the league said today.

Rodriguez, baseball said, used numerous "performance-enhancing substances" and then tried to "cover-up" his use by obstructing baseball's investigation.

The league also announced 50-game suspensions against 12 other players, in what's the culmination of a performance-enhancing drug scandal that has rocked baseball and some of its most well-known players.

All of the players, including Rodriguez, have been connected to Biogenesis, a South Florida clinic that distributed performance-enhancing drugs. Ryan Braun, the 2011 National League MVP, was the first to accept a suspension from Major League Baseball.

In a statement, Baseball Commissioner Bud Selig said he was "proud of the comprehensive nature of our efforts."

"Despite the challenges this situation has created during a great season on the field, we pursued this matter because it was not only the right thing to do, but the only thing to do," Selig said.

Because of injuries, Rodriguez, who has said he will fight the suspension, hasn't played for the Yankees since last fall. But he is scheduled to return to baseball during the Yankees game against the White Sox tonight. Major League Baseball said that his "suspension will be stayed until the completion of his appeal if Rodriguez files a grievance challenging his discipline."

Also of note: Major League Baseball said it found Gio Gonzalez and Danny Valencia did not violate its drug policy. Melky Cabrera, Bartolo Colon and Yasmani Grandal, who had already received 50-game suspensions, will not be punished further.

Shortly before he returns to the diamond batting clean-up for the New York Yankees, Alex Rodriguez deflected all questions that specifically asked if he had used performance enhancing drugs.

Time and time again, Rodriguez said during a televised press conference that we have to let the process play out and that there will be a time for him to tell his story.

"For me, it's gonna be business as usual," he said about tonight's game against the White Sox. He said his focus is on helping the Yankees win a spot in the playoffs.

During his introductory comments, Rodriguez, wearing the Yankees' road uniform, was more somber.

"The last 7 months have been a nightmare," he said, "probably the worst time of my life for sure." He said it had to do with the doping allegations brought against him by the league, but it also had to do with the "tough surgery" he had to recover from and because at 38, he is hitting the outer limits of a professional athlete.

When he was asked if he had any regrets, Rodriguez said he was human.

"Sure, there's been mistakes along the way," he said. But he stopped short of admitting wrong doing or accusing the league of lying.

A-Rod was the only player who did not accept punishment from the league.

During a televised press conference, Yankees Manager Joe Girardi said he would keep playing Alex Rodriguez as long as he remained in the club house.

"I'm not on this world to judge people," Girardi said. "My job is to get the best out of people."

Girardi was asked if he struggled with the decision to play him. He said he did not because he believes that in our world "we are innocent until proven guilty."

That said, Girardi said, "It's important players realize you have to do it the right way."

"I am disappointed with the penalty and intend to appeal and fight this through the process."

Via USA Today, that's what Alex Rodriguez has to say about his suspension. His attorney David Cornwell said the "unprecedented action" by baseball is "regrettable."

"Major League Baseball has gone well beyond the authority granted to its Joint Drug Agreement and the Basic Agreement," Cornwell said. "Consequently, we will appeal the discipline and pursue all legal remedies available to Alex."

Separately, The Yankees released a statement saying they support baseball's drug program and they would not comment until Rodriguez's appeal is resolved. They also shot back at Rodriguez, who accused the team of wanting to get out of his contract.

"We are compelled to address certain reckless and false allegations concerning the Yankees' role in this matter," the Yankees said. "The New York Yankees in no way instituted and/or assisted MLB in the direction of this investigation; or used the investigation as an attempt to avoid its responsibilities under a player contract; or did its medical staff fail to provide the appropriate standard of care to Alex Rodriguez."

In a statement, the Major League Baseball Players Association said it will "vigorously" defend Alex Rodriguez.

"The Union's members have made it clear that they want a clean game," Michael Weiner, the union's executive director, said. "They support efforts to discipline players, and harshly, to help ensure an even playing field for all. The players support the Union's efforts to uphold the JDA while at the same time guaranteeing that players receive the due process rights and confidentiality protections granted under the agreement."

Without detailing what he did, the Detroit Tigers' Jhonny Peralta issued a statement apologizing for a "terrible mistake" he made in the spring of 2012.

"I take full responsibility for my actions, have no excuses for my lapse in judgment and I accept my suspension," he said.

In his statement, the Rangers' Nelson Cruz said he turned to performance-enhancing drugs, after a tough "gastrointestinal infection."

"By the time I was properly diagnosed and treated, I had lost 40 pounds," Cruz said. "Just weeks before I was to report to spring training in 2012, I was unsure whether I would be physically able to play. Faced with this situation, I made an error in judgment that I deeply regret, and I accept full responsibility for that error."

The MLB says Rodriguez has been suspended for 211 regular season games, which means he's out through the 2014 regular season. The New York Times says that is "by far the longest levied by the league for a doping violation." The suspension includes any 2013 post season games.

As for the reason, MLB says:

"Rodriguez's discipline under the Joint Drug Prevention and Treatment Program is based on his use and possession of numerous forms of prohibited performance-enhancing substances, including Testosterone and human Growth Hormone, over the course of multiple years. Rodriguez's discipline under the Basic Agreement is for attempting to cover-up his violations of the Program by engaging in a course of conduct intended to obstruct and frustrate the Office of the Commissioner's investigation. The suspension, which will become effective on Thursday, August 8th ..."

The day has reportedly arrived when baseball superstar Alex Rodriguez will hear about his punishment.

USA Today, which has been among the news outlets out in front of the story, reports that A-Rod:

"Will be suspended through at least the 2014 season in an announcement Monday by Major League Baseball, but the New York Yankees third baseman plans to file an immediate appeal, enabling him to play Monday night against the Chicago White Sox at U.S. Cellular Field, two people with direct knowledge of the plan told USA TODAY Sports."

That means, as NPR's Mike Pesca said Monday on Morning Edition, that "it's likely he will be playing under the cloud of being the guy who will get the longest steroid suspension ever."

An announcement was expected around noon ET, but around 11:30 a.m. ET The Associated Press reported it had been told by sources that the news likely wouldn't be released until "later in the day." The Yankees' game Monday in Chicago, against the White Sox, is set for 8:10 p.m. ET.

In case you're just a casual fan or haven't been paying attention, Rodriguez and about 10 other players are expected to be punished because their names allegedly show up on customer lists at Biogenesis, a South Florida clinic that distributed performance-enhancing drugs.

One player, the Milwaukee Brewers' Ryan Braun, has already decided not to challenge a suspension that is keeping him out of games for the rest of this season.

A-Rod is the biggest name on the list not only because he's been among the game's best players, but because he had already admitted to past steroid use and because MLB officials believe he tried to interfere with their investigation of Biogenesis. Because of injuries, Rodriguez hasn't played with the Yankees since last fall. But he's now ready to retake the field.

"It was not immediately clear whether any of the other players will also appeal," MLB.com reports. "Some other names that have been linked to Biogenesis include Rangers slugger Nelson Cruz, Tigers shortstop Jhonny Peralta, Padres shortstop Everth Cabrera and Yankees catcher Francisco Cervelli."

If, as expected, the players other than A-Rod get 50-game suspensions, it would mean those who are on teams that make it to the playoffs could be back on the field in time for post-season games if they opt to accept their punishments and not file appeals.

(Update at 1:45 p.m. ET: Fox Sports' Ken Rosenthal is tweeting about players he's heard have accepted suspensions; and USA Today reports that "Nelson Cruz informed the Texas Rangers on Monday that he will accept his 50-game suspension, a move that stunned Rangers' officials, a person with direct knowledge of the decision told USA TODAY Sports." NPR has not independently confirmed such reports.)

As we wait for news, we wonder what Two-Way readers think should happen (if anything) to A-Rod. (The question closes at noon ET.)

Note: That's just a question, not a scientific survey of public opinion.