Accessibility links
The Road That Gives Electric Vehicles A Charge : The Two-Way In South Korea, a new type of charging road — power, not tolls — allows electric vehicles to be recharged whether they're parked or on the move. A city flipped the switch on a road this week to power commuter buses on an inner city route. 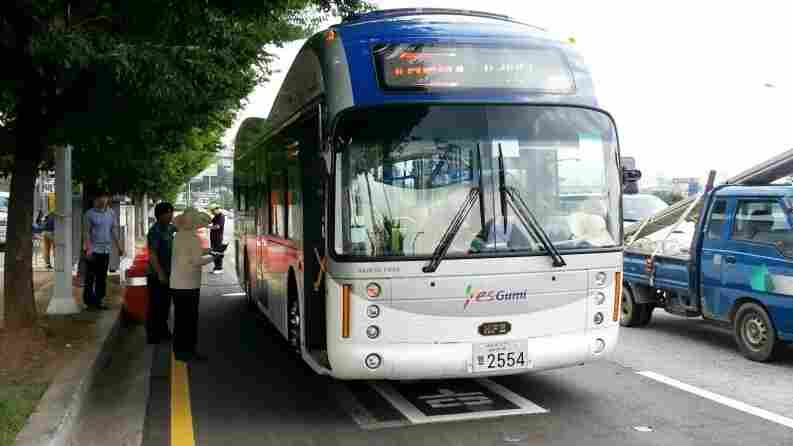 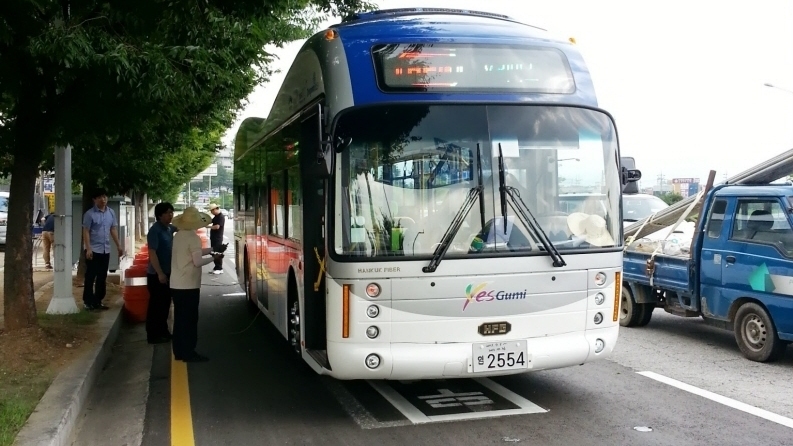 An electric city bus in Gumi, South Korea, is part of a program using electromagnetic fields to charge batteries of electric vehicles.

A city in South Korea flipped the switch on a road this week that will provide an electric charge to commuter buses on an inner-city route, officials say. The wireless power will be used to run two buses on round-trip routes of 24 kilometers (nearly 15 miles).

The charging road would allow electric vehicles to have much smaller batteries, according to researchers, and to be recharged whether they're parked or on the move.

The OLEV (Online Electric Vehicle) buses in the pilot program in the southern city of Gumi use batteries that are about one-third the size of a standard electric car battery. The city reportedly plans to add 10 more of the buses in the next two years.

According to a news release, the new power system includes a "smart function" that determines when an OLEV vehicle is on the road. That keeps the network from wasting power — and from bathing passengers in non-OLEV cars with an electromagnetic field.

To install the system, cables and power strips are added to 5 percent to 15 percent of the overall road's length, according to its inventors at the Korea Advanced Institute of Science and Technology.

The OLEV system gained notoriety in 2010; in the following year, the Massachusetts Port Authority reportedly reached a deal to license the technology for use at Boston's Logan International Airport.

A plan to bring several of the buses to McAllen, Texas, was put on hold last fall due to financing issues, as The Monitor reported. A Boston-based company called OLEV Technologies says it is working to put the systems to wider use.

The charge transfers as long as a vehicle's undercarriage stays within 17 centimeters (about six and a half inches) from the road surface. The Korean institute explains more about how it all works:

"OLEV receives power wirelessly through the application of the "Shaped Magnetic Field in Resonance (SMFIR)" technology. ... Power comes from the electrical cables buried under the surface of the road, creating magnetic fields. There is a receiving device installed on the underbody of the OLEV that converts these fields into electricity."

The technology has been used before in South Korea, the institute says — in OLEV trains at a Seoul amusement park and in shuttle buses on the university's campus.

"It's quite remarkable that we succeeded with the OLEV project so that buses are offering public transportation services to passengers," KAIST's Dong-Ho Cho said in the news release. "This is certainly a turning point for OLEV to become more commercialized and widely accepted for mass transportation in our daily living."