Accessibility links
Why Were The Baboons So Sad? Many Theories, No Answers : The Two-Way At a zoo in the Netherlands, 112 baboons suddenly started acting oddly. They turned their backs to visitors. They moped around. They didn't want to eat. It was a week before they got back to normal. Were they upset by a storm or an earthquake that people didn't feel? Maybe aliens? It's a mystery. 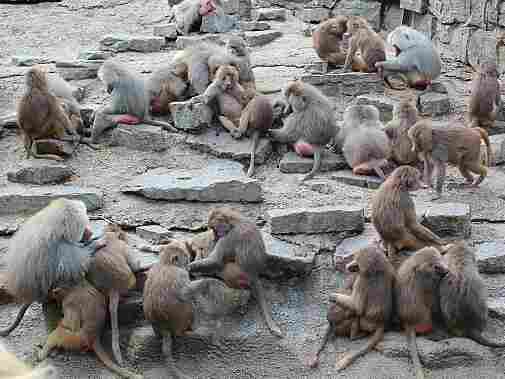 The Emmen Zoo's baboons last week, when they were looking so sad. Courtesy of the Emmen Zoo hide caption 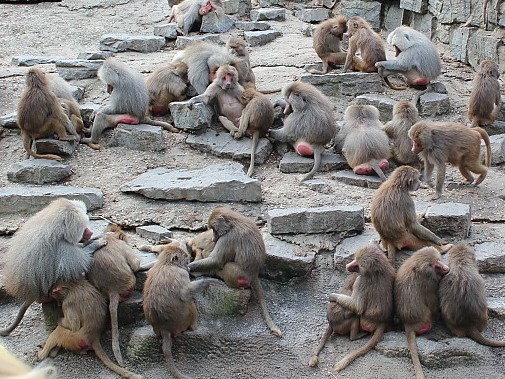 The Emmen Zoo's baboons last week, when they were looking so sad.

Courtesy of the Emmen Zoo

When the keepers at the Netherlands' Emmen Zoo opened the night enclosure for 112 baboons on July 29, they expected the animals would be, as usual, eager to get inside.

After all, the baboons knew there was food for them in there.

Over the next week, the baboons continued to behave oddly. They would sit with their backs to the public. They wouldn't make much noise; "it was rather silent, which is not normal for a baboon," says Landman. They were, in a word, looking rather sad. The zoo took to calling them "troubled."

It was about a week before the baboons began acting like themselves again.

Wijbren Landman, biologist and press officer at the Emmen Zoo, on why baboons sometimes act so sad.

It's a mystery, Landman says.

Just as when this sort of thing occurred at the zoo three times before — in 1994, 1997 and 2007 — keepers don't have any clear idea about what caused such melancholy. The most likely explanation seems to be that something was bothering one of the male leaders and others behaved as he did.

-- Lightning and thunder during storms that came through the area.

-- An earthquake that escaped the attention of humans (though we don't see any near the Netherlands on the U.S. Geological Survey's record of temblors for July 31).

-- A snake or some other kind of animal entering the baboons' area.

-- Aliens. "We didn't see them. Maybe the baboons saw them," Landman says with a laugh.

As you might imagine, there's also no clear answer for why the baboons have seemed to cheer up.

Theories are welcomed in the comments thread.

For much more on baboons, including audio of their sounds, check this package by National Geographic.

We'll add the as-broadcast version of Landman's conversation with NPR's Melissa Block to the top of this post later. Click here to find an NPR member station that broadcasts or streams the show.