Accessibility links
Burglars Return Loot To Group That Helps Sex Assault Victims : The Two-Way The offices of the San Bernardino County Sexual Assault Services agency were broken into. Computers and other valuables were taken. But whoever was responsible apparently had a change of heart after learning what the agency does. The goods were returned along with a note. 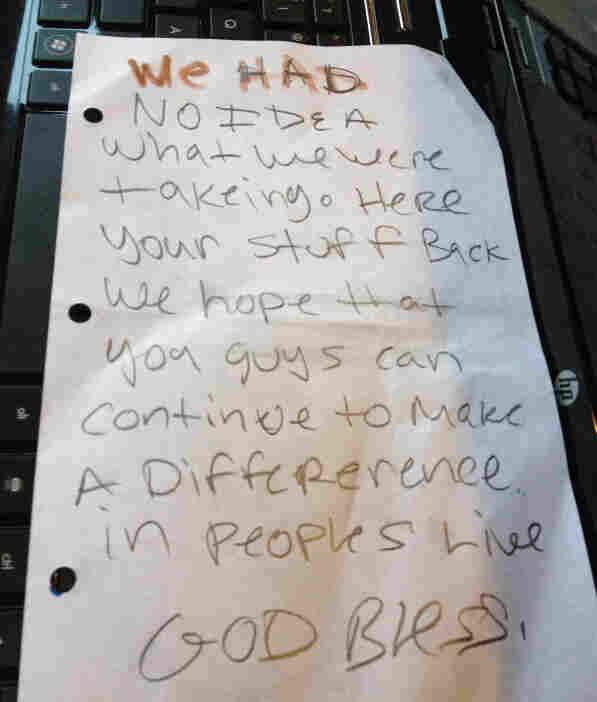 The note left behind by whoever took computers and other valuables from the offices of the San Bernadino County (Calif.) Sexual Assault Services. The goods were returned. California Governor's Office of Emergency Services hide caption 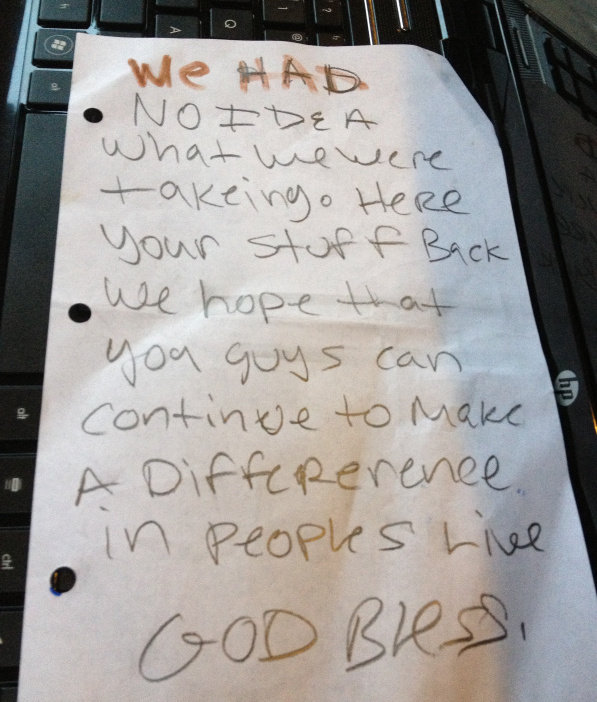 The note left behind by whoever took computers and other valuables from the offices of the San Bernadino County (Calif.) Sexual Assault Services. The goods were returned.

(Update at 7:30 a.m. on Aug. 9: Click here for new information about efforts to help the agency pay for the damage done to its office.)

Let's start our day with a feel-good story:

The burglar (or burglars) who broke into the offices of the San Bernardino County (Calif.) Sexual Assault Services on July 31 and stole several computers and monitors apparently had a change of heart after finding out that the people at the agency help victims of sexual violence.

The next night, someone returned the stolen goods and also left behind a note, as the California Governor's Office of Emergency Services and local news outlets report. The note's message:

"We had no idea what we were takeing. Here your stuff back. We hope that you guys can continue to make a difference in peoples live. God bless."

Candy Stallings, the center's director, thinks she knows who spread the word that led to the stolen goods' return. After the burglary, police talked with homeless people in the area around the center's offices — "explaining what our facility does and the services we provide to the community," she says. Stallings believes those homeless people then told others.

Los Angeles' KABC-TV has a video report here. It adds that the agency "is still out $5,000 because of damage that they will have to raise themselves." The agency is looking for help in covering those costs. Its website is here, and its Facebook page is here.

The agency says on its website that it is thankful for the "outpouring of support." It also says it's been having trouble with its online donation tab. So it has set up a new page for online donations here. As Friday dawned, about $1,870 of the agency's $10,000 goal had been raised.