Accessibility links
Stars And Stripes: Pair Of Sumatran Tigers Born At National Zoo : The Two-Way Four-year-old Damai is "being a great mom, and is nursing and grooming both cubs," zoo officials say. There was no immediate word on the sex of the cubs. 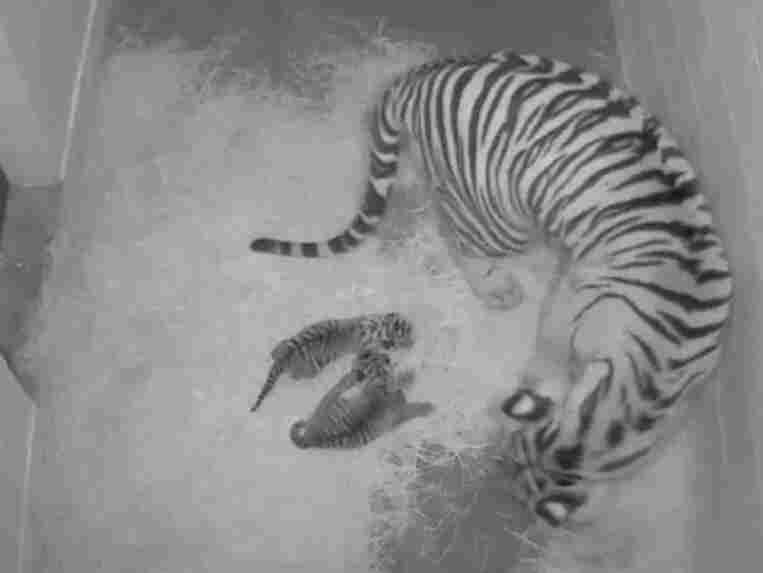 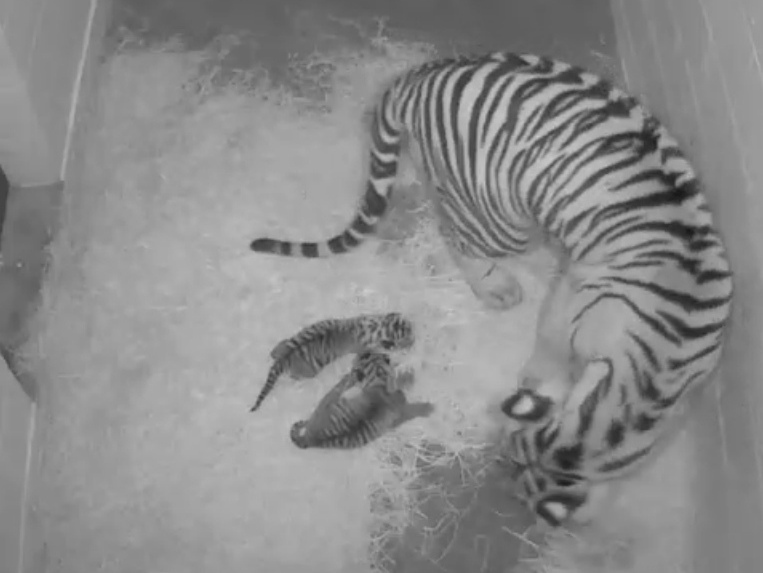 A Tigercubcam view of the new cubs, born at the Smithsonian's National Zoo on Monday.

The Smithsonian's National Zoo has announced the birth of a pair of Sumatran tigers, a species that has dwindled to less than 500 in the wild. Both mother and cubs are reportedly doing well.

There was no immediate word Thursday on the sex of the cubs.

Four-year-old Damai gave birth on Monday. The new arrivals appear healthy, and so far, "Damai is being a great mom, and is nursing and grooming both cubs," the zoo says on its website.

"All I can do is smile because the team has realized our goal of producing critically endangered tiger cubs," great cats curator Craig Saffoe says.

"The Sumatran tiger cubs' eyes have not opened yet, so Damai is spending most of her time grooming and nursing them. Damai lets the cubs crawl all over her, as if her body is a jungle gym."

The new family will likely not be on exhibit until late fall because "bonding time is critical for mom and her cubs," the zoo says. Until then, you can view the zoo's Tigercubcam or follow developments on Twitter at #CubWatch.

For the past few years, the National Zoo has been trying to encourage Damai and Kavi, the 12-year-old father, to breed. On June 21, officials confirmed via ultrasound that Damai was expecting.

Only about 400 to 500 Sumatran tigers exist in their native habitat on the Indonesian island. Their Javanese and Balinese cousins are already extinct.

The Zoological Society of London notes that "the vast majority of captive tigers are known hybrids or of unknown origin and so are not useful for conservation breeding purposes. Only tigers whose single subspecies ancestry can be traced back through written records can be included in conservation breeding programmes."

The history of such breeding programs appears to have been relatively successful. Damai was born at the San Diego Zoo, one of about 25 cubs to be bred there over the years –- including a pair of males as recently as March.

There are similar programs in places such as Melbourne, Australia, where four cubs were born in 2010.

Saffoe tells NPR that "we don't know what the gender is of either cub."

"We have our internal guesses because we like to play the same games that people at home like to play," the great cats curator says.

"The first cub that came out, I think every single keeper remarked how big that cub looked, so we said 'that's got to be a boy,'" he says.