Accessibility links
A 'Dilemma Zone' For Red-Light Cameras: Safety Vs. Cash : The Two-Way What's the point of a red light camera — to make intersections safer, or to generate revenue? That's the question asked by researchers at the University of Tennessee, who say the cameras are sometimes used in ways that are more likely to make money than to improve safety.

A 'Dilemma Zone' For Red-Light Cameras: Safety Vs. Cash

A 'Dilemma Zone' For Red-Light Cameras: Safety Vs. Cash 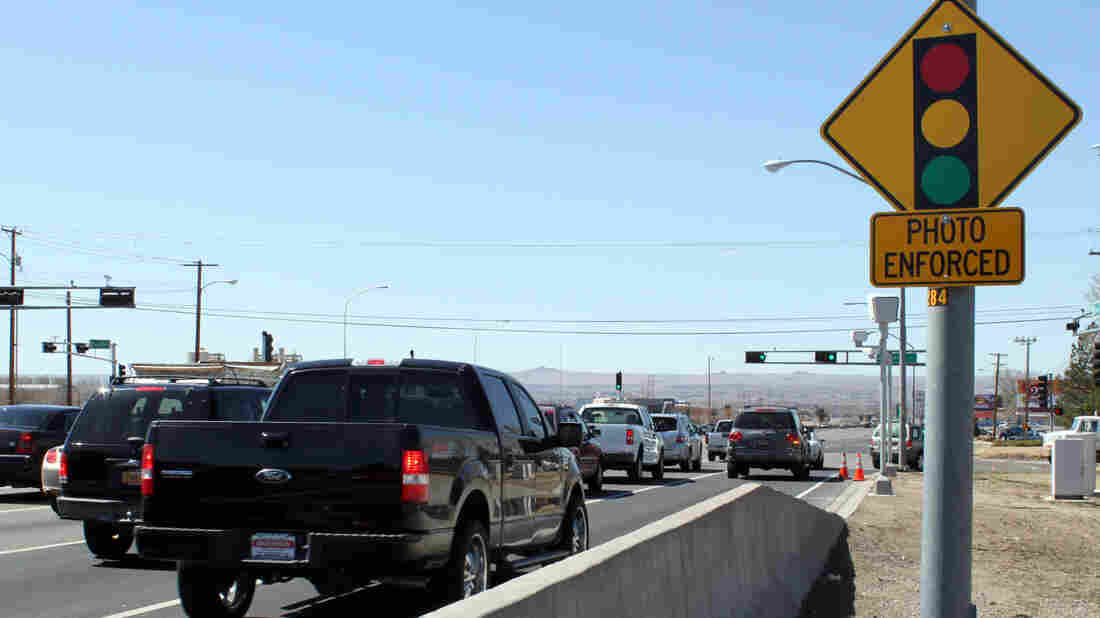 Traffic engineers face "a new conundrum" in dealing with red-light cameras such as this one in New Mexico, according to a recent study looking at how cameras are operated and the perception that they are used to generate revenue. Susan Montoya Bryan/AP hide caption 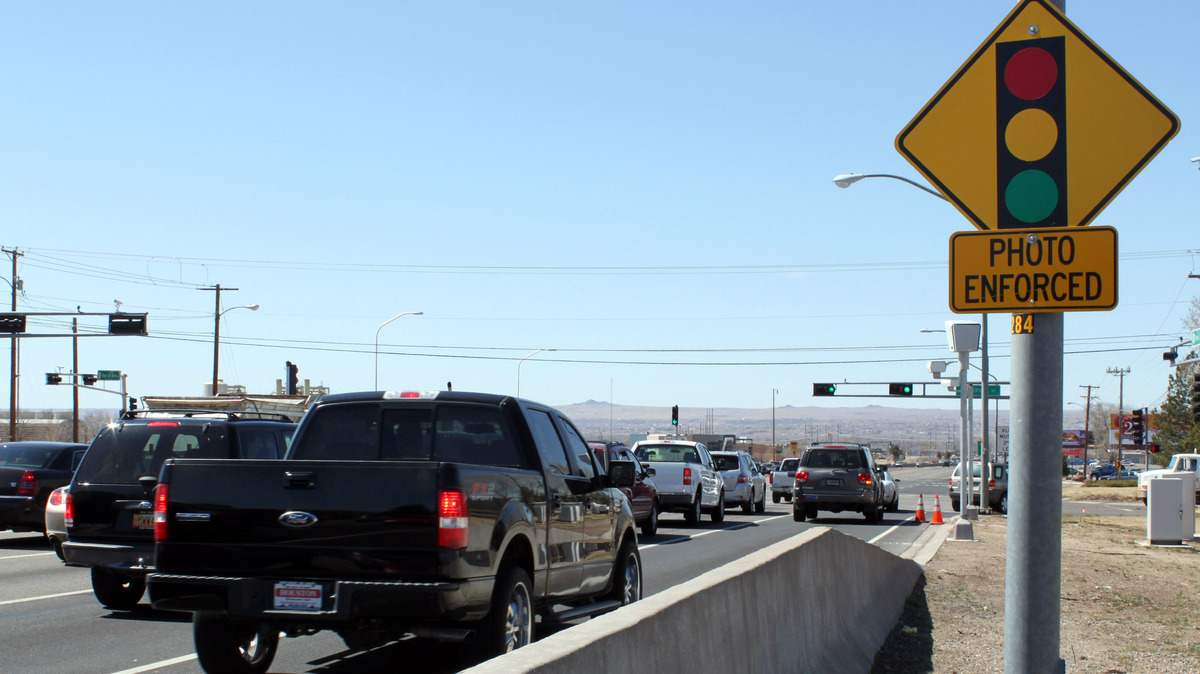 Traffic engineers face "a new conundrum" in dealing with red-light cameras such as this one in New Mexico, according to a recent study looking at how cameras are operated and the perception that they are used to generate revenue.

What's the point of a red-light camera — to make intersections safer or to generate revenue? That's the question prompted by researchers at the University of Tennessee, who say the cameras are sometimes used in ways that are more likely to make money than to improve safety.

"Traffic engineers are facing an ethical dilemma of balancing revenue generation to sustain their red-light camera programs with their traffic safety and efficiency goals," says professor Lee Han of Tennessee's civil engineering department. "This is a new conundrum for them."

Red-light cameras are currently deployed in 24 states, reports the Governors Highway Safety Association. Nine other states have banned the cameras. The study, which looked at data from existing research on traffic at intersections in counties and states, notes there's no consensus yet on whether such cameras actually do increase traffic safety and addresses concerns they're used as money-makers.

In their research, Han and his colleagues explored what they call "dual, conflicting purposes" in the system: The more effective a camera is at making an intersection safe, the less profitable — and self-supporting — it becomes.

In an email, Han explains how that works:

"An analogy is a 'swearing jar' in the office. To improve civility and reduce swearing, a swearing jar might be established. Everyone caught swearing is to put, say, $1 in the jar. Initially, this is very successful and the proceeds are used to pay for, say, the daily supply of doughnuts.

"But after a while people begin to learn and swear less. Now, with less money in the swearing jar and everyone used to the 'free' doughnuts, what do they do? They can increase the fine to $2 per offense. They can trick people into swearing. They can define more words as swearing words."

Han says some city and county governments have gone through "gyrations" to keep their red-light cameras operating.

"Some increased fines from $50 to $100 per offense," he says. "Some play with traffic signals to get more incidences of red-light running. Some added speed enforcement to the red-light camera program over time."

Han and his colleagues analyzed the broader effects of such strategies.

For instance, cutting the duration of a yellow light by one second — from four seconds to three, for example — results in a higher frequency of drivers running a red light — as high as 110 percent, according to the study.

And if the speed limit around an intersection goes up, drivers are more likely to be caught in the "dilemma zone" — where they must quickly consider their options, and have less room to stop comfortably. According to one report in the study, raising the limit by 10 mph makes it 45 percent more likely that drivers will run the light.

Both of those measures, in addition to generating more revenue, can raise the risk of a crash occurring, the researchers say.

Another strategy that was reported in the Tennessee paper but not closely studied is the practice of municipalities removing signs warning drivers of an upcoming signal.

The Tennessee team's paper, titled "Some measures for sustaining red-light camera programs and their negative impacts," will be published in the September issue of Transport Policy. Han says the goal is to inform officials about the risks of tinkering with traffic signals in a way that potentially could cause more people to run red lights, and "to provide transparency to the public about such practices."

Those strategies can potentially compromise intersections' safety and efficiency, Han says, even when the program was begun with good intentions.

"I personally think most traffic engineers would not yield to pressure from above to tinker with their traffic signal timing plans to increase revenue," Han says. "But such offenses do happen as I mentioned in the paper. It is preferred that engineers never be put in the position to face ethical dilemmas, though."

As the study points out, most local governments rent their automated red-light camera systems from private companies that in return get either a flat monthly fee or a proportion of the fines levied on drivers. Such arrangements can create a new set of pressures, the researchers say, as officials try to meet their financial obligations.

"Whether or not the municipalities' motives were explicitly trying to increase revenue, it is clear that there is a strong perception that engineering strategies are used to increase [red-light running] and policy is being developed to combat poor engineering practices in the context of [red-light cameras]."

Christopher Cherry, another author of the study, says,"We hope the public sector and the public use our research to reflect on the motivations for changing signal operations."

News of the researchers' work comes as public debate rages over red-light cameras. Those who see them as a revenue generator point to Washington, D.C., where the cameras brought in nearly $13 million in 2012, according to a recent report that cites numbers from the American Automobile Association.

A regional AAA website says the group supports any effort to increase safety — "however, the sole purpose of red-light cameras must be increased safety, not increased revenue." The site goes on to list the cameras' locations in the mid-Atlantic.