Accessibility links
Meet The Olinguito, The Newest Member Of The Raccoon Family : The Two-Way This cousin of the raccoon is the first new carnivore discovered in the Western Hemisphere in 35 years. Native to the Andes Mountains of Colombia and Ecuador where it's still living, the olinguito was actually first identified in a Field Museum specimen storage room in Chicago. 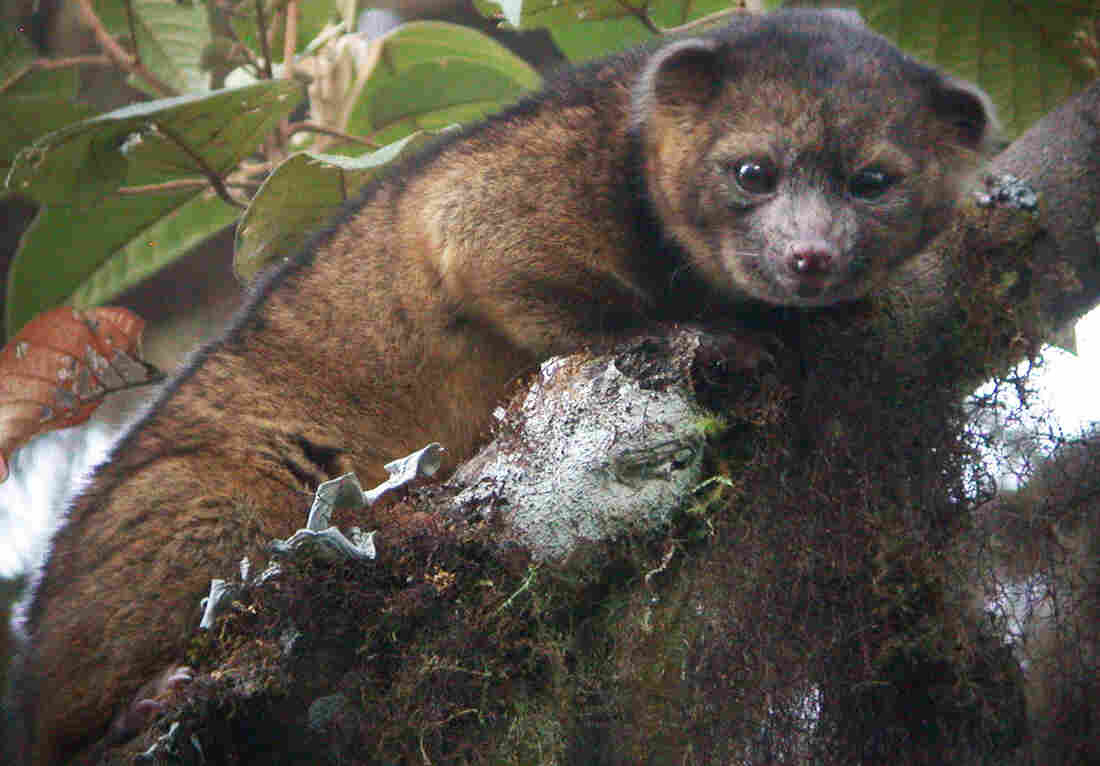 The olinguito is the first carnivore species to be discovered in the Western Hemisphere in 35 years. Courtesy of Mark Gurney hide caption 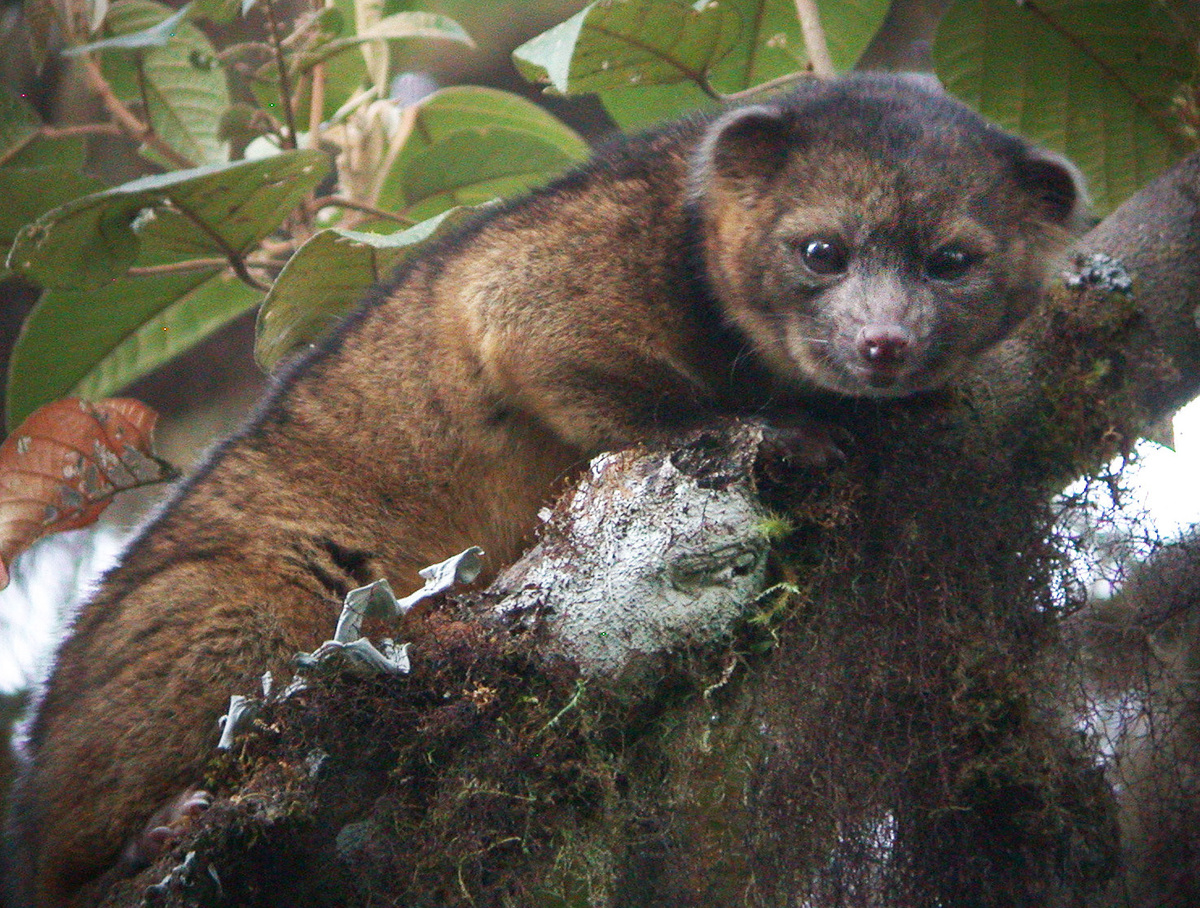 The olinguito is the first carnivore species to be discovered in the Western Hemisphere in 35 years.

Scientists have just solved a case of mistaken identity. It involves a creature that looks like a cross between a house cat and a teddy bear, and it lives high up in the cloud forests of the Andes.

For over 100 years, scientists thought this animal was a well-known member of the raccoon family. Specifically, they thought it was a critter called the "olingo." But one scientist recently took another look and realized he had an entirely new species on his hands.

That scientist is Kristofer Helgen, a curator at the Smithsonian Museum of Natural History. He stumbled upon the animal while visiting The Field Museum in Chicago and sifting through dead specimens of the olingo.

"I pulled out a drawer. It was not anything I'd ever seen before. This was not any member of the raccoon family that anyone was familiar with," he says.

He started comparing the bodies and skulls of this animal with the olingos it was stored with.

At a storage room in the Smithsonian, Helgen shows off a lineup of dead specimens: On the left are two raccoons and on the right, two smaller animals — lighter brown in color, with tails lacking the characteristic raccoon bands. Their fur is softer, longer, thicker, because as Helgen discovered, this new cousin lives up high in the Andes Mountains in Colombia and Ecuador.

In fact, in every aspect he looked at, it looked unmistakably like a novel species — right down to the teeth.

"Look at those molars there, those big chunky teeth in the mouth," he says, as he pulls out a skull from a cardboard box.

Helgen has named the new species "olinguito," which means "little olingo," because of its striking resemblance to the animal it was long confused with.

All of the museum specimens of the olinguito that Helgen looked at came from the cloud forests in Ecuador and Colombia. So, he and his colleagues went looking for the animal in Ecuador. 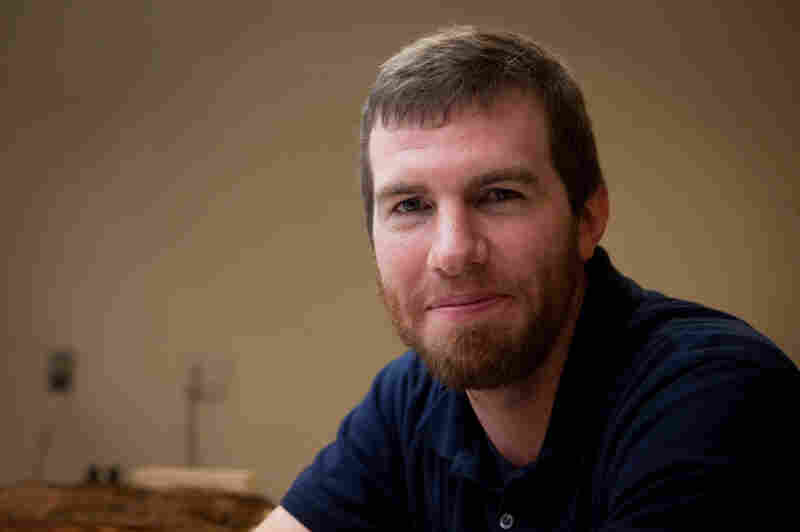 He says the animal is shy and rarely comes down from trees.

He and his team have published their findings in the journal Zoo Keys.

Esteban Payan, of the nonprofit organization Panthera, says he is thrilled at this discovery. He is an expert on mammals in the Andes and is based in Bogota.

Payan says he spent his childhood summers on a farmhouse right in the middle of the olinguito's habitat and had no clue about the animal's existence.

"I'm surprised," he says. "I'm flabbergasted to have that species right there, under our nose and no one knows that!"

Payan says he now plans to set up video cameras around his farm house in the hopes of catching a glimpse of this shy, elusive animal.