Accessibility links
After Fatal Crash With Cyclists, Driver's Tweets Help Spur Murder Charge : The Two-Way An 18-year-old man in California stands accused of murder, after law enforcement officials upgraded a manslaughter charge against him, based on his tweets and driving history. 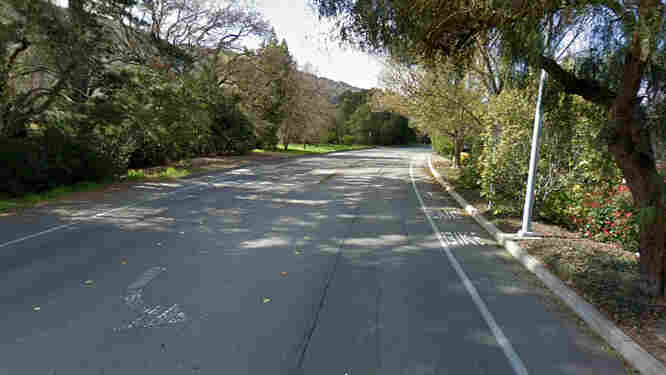 A stretch of Foothill Road in Pleasanton, Calif., near where police say Cody Hall, 18, lost control of his car and struck two cyclists. One cyclist died, and Hall was charged with murder this week. Google Map hide caption 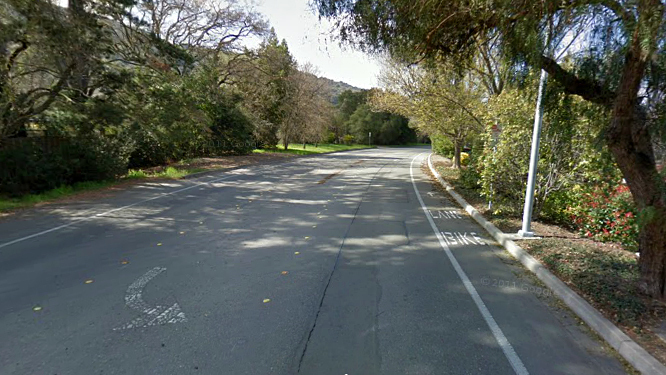 A stretch of Foothill Road in Pleasanton, Calif., near where police say Cody Hall, 18, lost control of his car and struck two cyclists. One cyclist died, and Hall was charged with murder this week.

An 18-year-old California man stands accused of murder after law enforcement officials upgraded charges against him based on his tweets and driving history. Cody Hall was initially charged with manslaughter for allegedly losing control of his car, which struck and killed a woman riding her bike in Pleasanton, Calif.

"According to police, Hall was driving north in a 2004 Dodge Neon and was traveling 83 mph in a 40-mph zone as he passed a vehicle at about 1 p.m. He lost control and collided with the couple, killing [Diana] Hersevoort and injuring her husband, Johannes Hersevoort, 57."

Johannes Hersevoort suffered a broken leg in the crash. The pair had been riding in a bike lane alongside Foothill Road, police say, in an area that is marked by a golf course and large houses with swimming pools. Near the scene, KTVU TV News spoke to a pedestrian who said the street where the incident occurred is "a very popular road for bicyclists especially on weekends."

After the crash, Hall stopped and spoke with police. But he declined to give a statement, according to the Pleasanton Weekly.

After officials concluded their investigation in late July, Hall was arrested on felony charges of vehicular manslaughter and reckless driving. He was released on bail after an initial hearing. But he now sits in a county jail, after the Alameda District Attorney's office increased the charge of felony vehicular manslaughter to murder.

"An analysis of Hall's driving record and pattern — along with Twitter posts in which he talked about how fast he liked to drive — factored into upgrading the case to murder," The Chronicle reports, citing local authorities.

It was a striking reversal for Hall, who had seemed by turns relaxed and nervous in the moments before this week's court hearing, the Pleasanton Patch reported. The site says Hall's friends accompanied him to the hearing.

After the new charges were announced, the judge ordered officers to take Hall into custody and that he be held without bail, according to the Patch site, which has followed the case since the Hersevoorts were struck on a Sunday afternoon during their weekly bike ride.

Days after the crash, the Patch site posted a story about Hall's Twitter account, highlighting messages in which he talked about his penchant for speeding.

"Drive fast live young," reads one tweet. Another states, "Someone come on a death ride with me !!!"

But a parent who has seen the tweets tells Patch that the messages don't describe the young man they know, calling Hall "a hardworking young man with a fondness for animals," the site reported. Others also commented on the story, with several people coming to Hall's defense.

The case has prompted heated discussions on the Pleasanton Weekly site, to the point that its staff has had to defend their editing of users' comments.

Prosecutors may try to use Hall's tweets as a "pre-offense statement," an official in the nearby Santa Clara County district attorney's office tells the AP. While he has no role in Hall's case, Brian Welch tells the news service that while the tweets would be an unusual way to do it, they may help prosecutors prove malice.

"The challenge in these situations is proving that your defendant is the person who posted the statement," he tells the AP.

Hall could now face "15 years to life on the murder charge and an additional three years and eight months for the reckless driving charge," reports the Pleasanton Weekly.

The car crash also has had consequences for Hall's father, Aaron. When police performed a search related to Cody's case in June, they came upon a gun safe containing two illegal assault weapons and thousands of rounds of ammunition, The San Jose Mercury News reported.

As a convicted felon, Aaron Hall is barred from owning any firearms. He was arrested and has been freed on bail. The Mercury News reports that his felony convictions occurred nearly 20 years ago.