Accessibility links
NPR CEO Gary Knell Announces He's Leaving : The Two-Way Knell joined NPR in December 2011. He came after the resignation of Vivian Schiller, who left after two high-profile controversies. Now he's moving to National Geographic for what he says is an opportunity "I could not turn down."

After fewer than 21 months on the job, NPR CEO Gary Knell announced at mid-day Monday that he's leaving the organization to become president and CEO at the National Geographic Society. 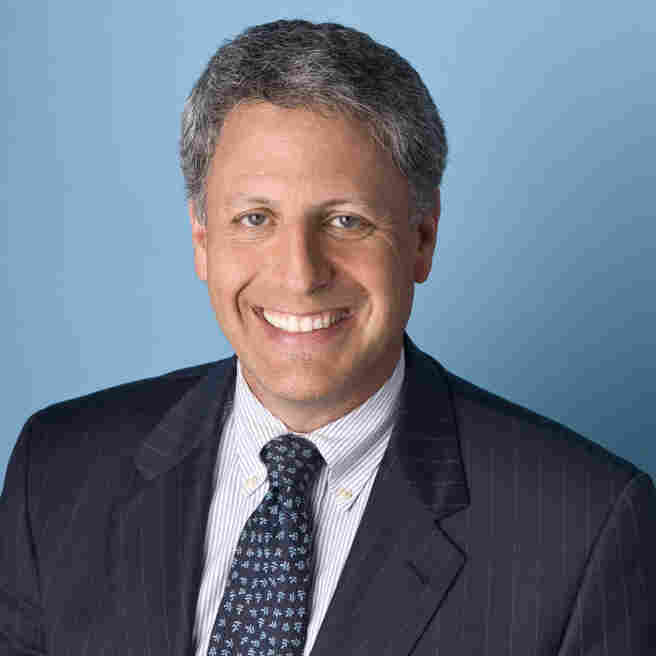 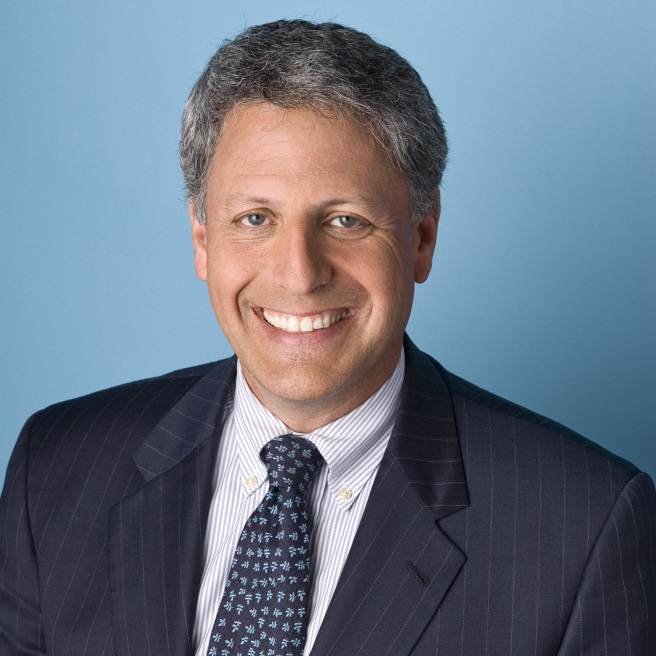 In a message to a surprised staff, Knell said he was "approached by the organization recently and offered an opportunity that, after discussions with my family, I could not turn down." Click here to jump down to his full statement.

Knell came to NPR from Sesame Workshop in December 2011, in the wake of considerable upheaval. Vivian Schiller had resigned as CEO and president earlier that year, after two high-profile controversies — the mishandled firing of NPR analyst Juan Williams and video of a NPR fundraising executive slamming conservatives. NPR's board of directors concluded that she could no longer effectively lead the organization.

Once Knell arrived on the scene, NPR media correspondent David Folkenflik says, the turmoil seemed to ease as the sense grew that NPR was being "led by grownups who were working constructively in a shared direction" — even as the organization continued to face significant budget pressures.

Now comes Knell's looming departure. The outgoing executive says he feels he's leaving NPR in better shape than when he arrived, and that the organization is "way bigger than, frankly, the CEO." He's expecting that before he leaves in November, NPR's board will have approved a strategic plan — highlighted by an increasing emphasis on collaborations between member stations and the national staff. Knell believes his successor will be able to pick up and continue that "strategic trajectory."

We've followed the news of Knell's departure as it has developed. Scroll down to see our updates from throughout the day.

Pressed by NPR's David Folkenflik about the seeming turmoil atop NPR, which is now about to have its seventh CEO in seven years, and the message that sends to the public, Knell just said that this is a "strong institution ... it's going to be around for many, many years" and that NPR is "much bigger than a CEO."

He believes his successor will inherit an organization that's in better shape than when he arrived, Knell said, and that NPR's increasing emphasis on "station collaboration" (highlighted recently by the launch of the WBUR/NPR Here & Now show), is a strategy that will live on.

Kit Jensen, chair of NPR's board, told David that directors have been "absolutely thrilled and pleased" with Knell's performance as CEO. Both she and Knell said they had been working on an extension of his two-year contract with the organization when he was approached by National Geographic. The board will meet in September to begin work on finding a successor, she added.

Knell said he "loves NPR and the people here," but that the job with National Geographic will allow him to focus on one of his passions — education. And, he said, "I didn't have an opportunity to say 'call me in a year.' " The offer had a short window.

After the controversies at NPR that preceded his joining the organization, Knell "calmed the waters," NPR media correspondent David Folkenflik said moments ago on Here & Now. There was a sense, according to David, that NPR was being "led by grownups who were working constructively in a shared direction."

But with another CEO's departure, an astonished staff is wondering why there's again turmoil at the top. And, David added, there is "no idea" who Knell's replacement will be.

"I'll be on @hereandnow at 1.34p to talk abt departure of NPR CEO Knell - can stream on http://wbur.org or http://whyy.org," tweets NPR's David Folkenflik.

Knell and members of NPR's board are talking with the staff this hour. According to NPR media reporter David Folkenflik:

"Knell says no difference of opinion w NPR informed departure. Board VP tells NPR staffers that directors learned of his decision this AM."

"Knell: This is not about me not believing in public radio. Thought this journey would last longer. But timing is never right."

In 2011, National Geographic paid its CEO $1.4 million, WHYY's Zack Seward reports. As we said earlier, Knell took a pay cut when he joined NPR vs. the more than $700,000 he had earned with Sesame Workshop.

Here what NPR's David Folkenflik is set to report on our next newscast:

"Knell's decision arrives with none of the acrimony or sensation that accompanied the departure of several of his predecessors. His decision to leave is nonetheless a blow to NPR — Knell has been seen as a steadying presence and a champion for NPR's journalism. He has been leading its efforts to address tough budgetary challenges amid a changing media landscape.

"Knell arrived in 2011 from Sesame Workshop — the not-for-profit behind Sesame Street — and in the National Geographic Society he will find one of the world's leading educational and conservation institutions. Knell said it was an opportunity he did not solicit. His replacement will be NPR's seventh acting or full-time CEO in little over seven years."

When Knell left his previous job to join NPR, our colleague David Folkenflik reported that "in 2009, the most recent year for which Sesame Workshop's tax returns are publicly available, Knell received pay of $684,144 and additional compensation of $62,000. He said he would be taking a pay cut to accept the [NPR] job."

"By my count," tweets NPR media correspondent David Folkenflik, "Knell's replacement will be the seventh permanent or acting NPR CEO in little more than seven years."

According to the National Geographic Society, Knell will "succeed John M. Fahey as president and chief executive officer. Fahey will continue to serve as chairman of the board. Knell's appointment will occur later this year, following a transition from his current role as president and CEO of National Public Radio."

According to a press release from NPR, Knell will leave in the fall. He'll "remain with NPR until then to work with the board to ensure a smooth transition as it launches a search for his successor."

"Gary and the management team have worked effectively to strengthen NPR as a world-class media organization, technological innovator and industry leader," Kit Jensen, chair of NPR's board says in that statement. "NPR has built a firm foundation for providing the highest quality journalism and programming. We will be working closely with Gary over the next few months, and deeply appreciate the lasting impact he has made."

Knell's statement to the NPR staff:

"Before I even started at NPR, I had huge respect for this organization. And from the first minute of my first day at NPR, my respect has only grown. Seven days a week, around the clock, NPR is 'on the story' no matter where it happens. That's because of what each of you make happen. The power of this organization rests in the collective brilliance, courage, and dedication of our staff and our station community – and in our shared commitment to making this institution better each day.

"Knowing this makes it a little easier to share a difficult decision I've made. I will be leaving NPR after my term ends in late fall to join the National Geographic Society as its President and CEO. I was approached by the organization recently and offered an opportunity that, after discussions with my family, I could not turn down.

"As President and CEO, supporting NPR's success – your success – has been my highest ambition. Working together, we have put NPR on more solid footing to continue to deliver the highest-quality journalism and programming. We have launched innovative new platforms and made meaningful strides in attracting new audiences and new funding. We have promoted a series of collaborations in news gathering, development, and a digital future. And we have an exceptionally strong leadership team in place that is charting an ambitious path for our future.

"We also face challenges, including the mandate to bring NPR to break-even cash operations. We are completing a plan to focus our limited resources which support our essential services to stations and audiences. We will present that plan to the Board soon, go over it carefully, and make it a reality.

"The Board, under the leadership of Chair Kit Jensen, has been incredibly supportive of my leadership and is more than up to the task of finding a great successor. This is a remarkable organization and being NPR's CEO is a remarkable job, the best part of which has been engaging with each of you and with thousands and thousands of our supporters around the country. This is a job that demands everything of you, but returns more than you'd thought possible.

"It has taken a great deal of personal reflection on my part to reach this decision. I will leave with a sense of enormous gratitude to each of you for all you do to make this organization a national treasure.

"In the upheaval of today's media environment, you offer something few other media companies can. NPR is and will always be a beacon of journalistic integrity, commitment, and courage. We do what we do so that we can serve our audiences and give them what they need to be informed and connected with their communities, their country, and the world we live in.

"Thank you for giving me the opportunity to work with you."