Accessibility links
On Fifth Try, Diana Nyad Completes Cuba-Florida Swim : The Two-Way At 64, the long-distance swimmer becomes the first person to cross the Florida Straits without the aid of a protective shark cage. She swam for more than two days and traveled more than 100 miles. 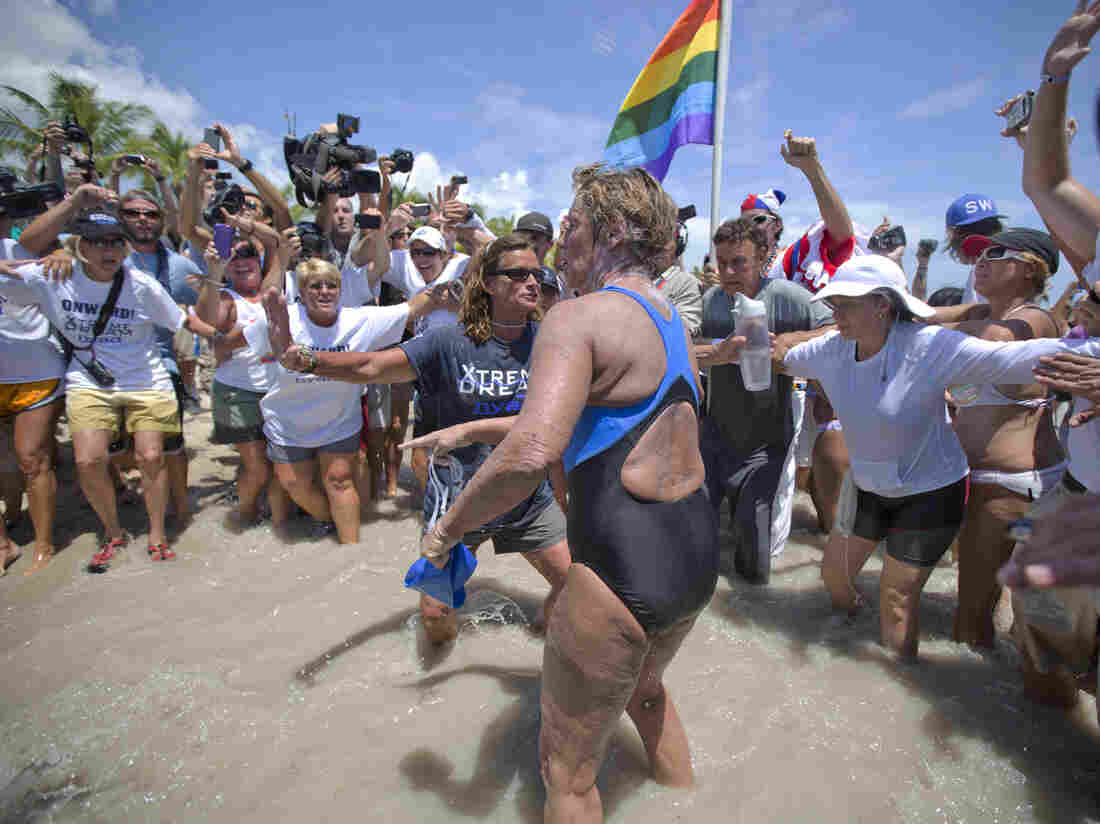 United States endurance swimmer Diana Nyad is greeted by a crowd as she walks on to the Key West, Fla., shore today.

Jellyfish stings, an asthma attack and sheer exhaustion all stopped Diana Nyad in the past. But on her fifth try, the 64-year-old Nyad became the first person to swim unaided from Cuba to Florida, a distance of more than 100 miles.

With a cheering crowd greeting her on the beach in Key West, Nyad swam ashore Monday afternoon after more than two full days in the water. The swim began Saturday morning when she jumped off a seawall at the Hemingway Marina in Havana.

Her journey took her more than 100 miles across the Florida Straits, according to her team, which included five boats and a support crew that kept watch for sharks and jellyfish.

As the crowd surrounded her, Nyad stood on the beach and said: "I have three messages: One is, we should never, ever give up. Two is, you are never too old to chase your dream. And three is, it looks like a solitary sport but it takes a team."

Nyad was sunburned and clearly exhausted. Her face was swollen and her speech was slightly slurred.

Nyad began receiving a flood of congratulatory messages immediately after she reached Key West. They included a tweet from President Obama, who wrote, "Never give up on your dreams."

As she entered the homestretch Monday morning, her team reported that her tongue and lips were swollen, causing her speech to be slurred.

"Diana has gotten very cold, so the handlers were not stopping her to eat and drink overnight in the hopes that swimming would keep her warm," a member of her team, Katie Leigh, reported Monday morning.

Nyad made her first attempt in 1978 — in a shark cage — but came up short. She then gave up long-distance swimming for decades. In her 60s, she has made another push. In three previous attempts since 2011, jellyfish stings, an asthma attack and shoulder pain kept her from reaching Key West.

This time, she wore a full bodysuit to protect her from stings.

As The Miami Herald notes, Australian Susie Maroney made the Cuba-Florida swim in 1997 at the age of 22 using a shark cage, which not only protects the swimmer, but also helps pull the swimmer along and makes the water less choppy.

And Walter Poenish, who was 84 at the time, claimed he made the swim in 1978 with the help of a shark cage and the use of flippers.

The International Marathon Swimming Hall of Fame does not recognize either of those crossings because they were aided.