Accessibility links
The Incredible Case Of The Bank Robber Who's Now A Law Clerk : The Two-Way Shon Hopwood was in prison for more than a decade. There, the bank robber became a jailhouse lawyer who got a fellow prisoner's case heard before the Supreme Court. Now a law student, he'll be a clerk at one of the nation's most prestigious courts. The judge who put him in prison is stunned. 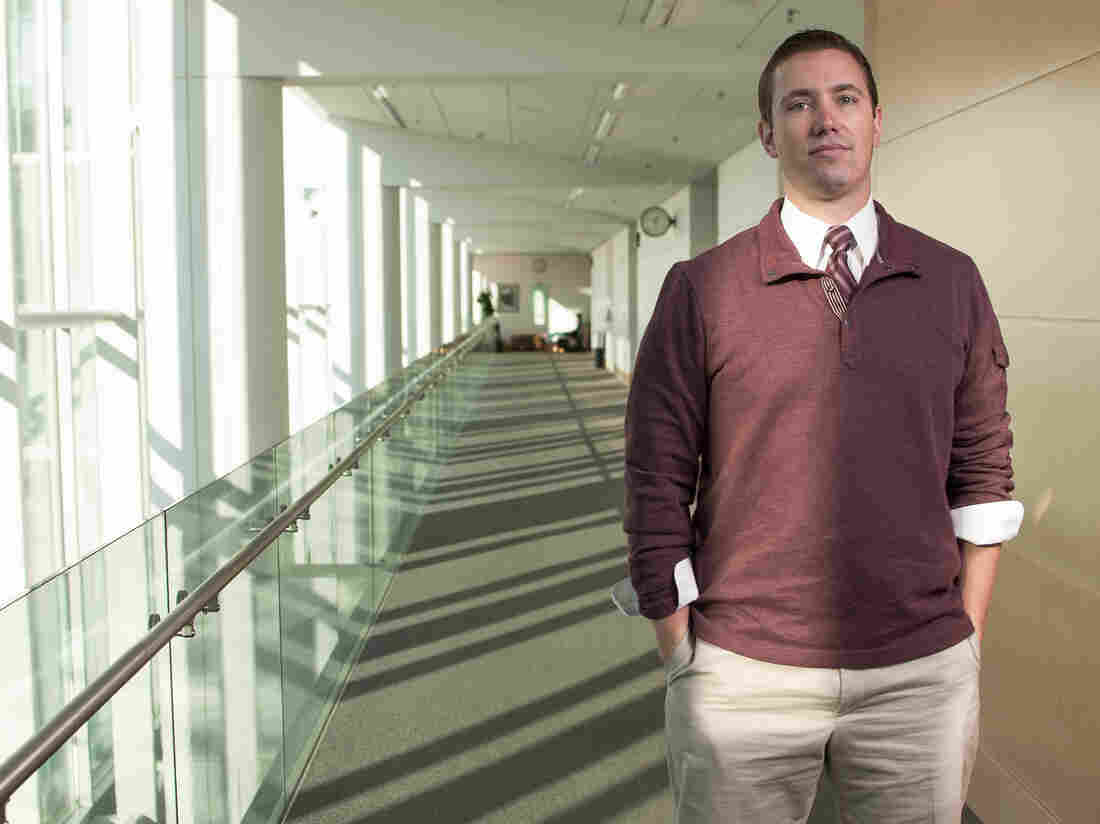 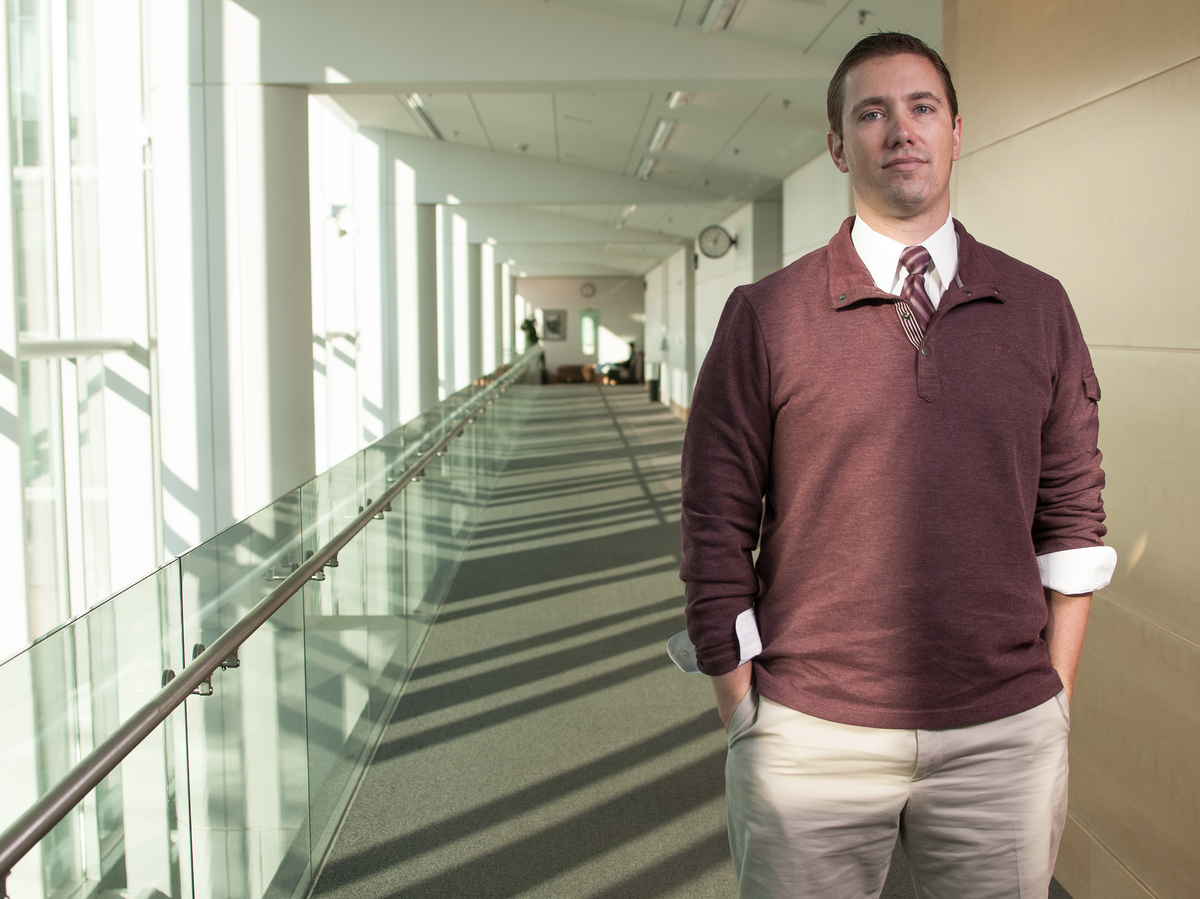 After serving almost 11 years in federal prison for bank robbery, Shon Hopwood is a law student at the University of Washington. He's landed a prestigious law clerk's position with the U.S. Court of Appeals for the D.C. Circuit.

Sang Cho/Courtesy of The Daily of the University of Washington

"I had no prior history with the law other than breaking it."

All Things Considered on Thursday catches up with the remarkable story of Shon Hopwood, who has gone from being a 23-year-old bank robber sentenced to spend about a decade in prison to become a 38-year-old father who's soon to be clerking for a judge on "the prestigious U.S. Court of Appeals for the D.C. Circuit."

The first of those two quotes at the top of this post is from Hopwood himself.

The second is from federal Judge Richard Kopf, the man who sent Hopwood to prison. He's stunned by Hopwood's transformation and concedes that "my gut told me that [he] was a punk — all mouth, and very little else. My viscera was wrong." In Kopf's own opinion, "Hopwood proves that my sentencing instincts suck."

In a conversation the two men had with NPR's Melissa Block — the first time they've been interviewed together, though they have exchanged thoughts on Kopf's blog — Hopwood talks about how he changed during his time in prison. He went from being a drug addict and someone who "really had no purpose in life" to a jailhouse lawyer with an aptitude for searching case law and finding decisions that would help his fellow inmates.

As The New York Times reported in 2010, Hopwood:

"Transformed himself into something rare at the top levels of the American bar, and unheard of behind bars: an accomplished Supreme Court practitioner.

"He prepared his first petition for certiorari — a request that the Supreme Court hear a case — for a fellow inmate on a prison typewriter in 2002. Since Mr. Hopwood was not a lawyer, the only name on the brief was that of the other prisoner, John Fellers.

"The court received 7,209 petitions that year from prisoners and others too poor to pay the filing fee, and it agreed to hear just eight of them. One was Fellers v. United States."

The justices, in a 9-0 decision, agreed that police had "crossed constitutional lines in questioning Mr. Fellers, who had been convicted of a drug conspiracy," the Times wrote. "The case took some more turns in the lower courts, but in the end Mr. Fellers's sentence was reduced by four years."

Of his life before he went to prison, Hopwood admits he was "a very stupid, foolish and reckless kid." He and some accomplices stole about $200,000 during a series of bank robberies in Nebraska.

He holds no grudge against Kopf for the 13-year sentence he was given. "I couldn't back up what I said in 1999" about wanting to reform, Hopwood now says, "and the sentence the judge gave me was in accordance with the law at the time. ... I deserved to go to prison."

Hopwood — who was released from prison in 2008 and is set to graduate next year from the University of Washington's School of Law — believes now that sentencing most non-violent offenders such as him to more than 5 years or so in prison may do more harm than good. Convicts he knew with longer sentences, "after a couple years of being in prison, they just gave up hope."

Kopf agrees, saying that "5 years is plenty for most crimes, in my opinion."

Looking ahead, Hopwood knows that as he takes bar exams his criminal history will come up when it's time for states to decide if he should be allowed to practice law. "I'd like to think the things I've done since prison and the volunteer hours I've put in and the people who will go to bat for me will make a difference to [a] bar association," he says.

Kopf, meanwhile, sees "zero, zilch, nada" reasons for not allowing Hopwood to practice law. "If this young man doesn't get a law license, there's something wrong," the judge says.

Much more from Melissa's talk with Hopwood and Kopf is due on All Things Considered. We'll attach the as-broadcast conversation to the top of this post later. Click here to find an NPR station that broadcasts or streams the show.

We'll also attach a link to an excerpt from a book Hopwood has written, Law Man: My Story of Robbing Banks, Winning Supreme Court Cases and Finding Redemption.

Read an excerpt of Law Man