Accessibility links
Fire Sweeps Through Businesses Along Jersey's Seaside Boardwalk : The Two-Way The blaze began Thursday afternoon in an ice cream shop and spread to adjacent structures within a few hours. 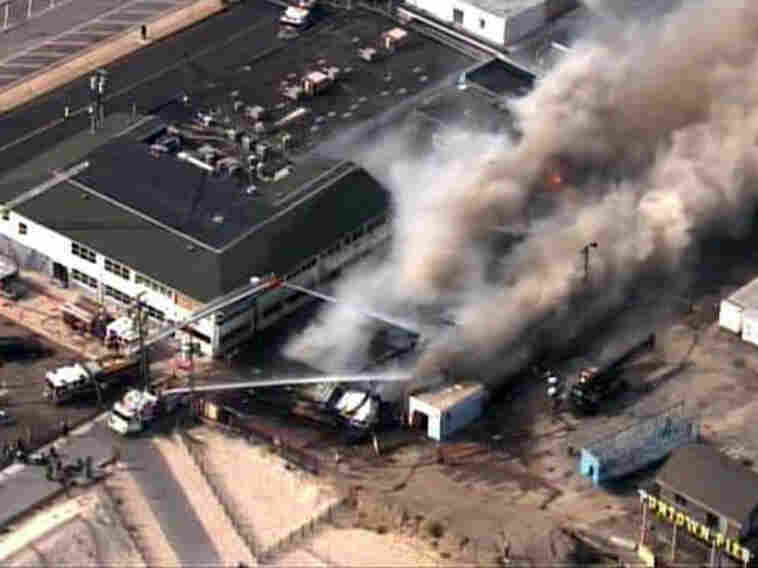 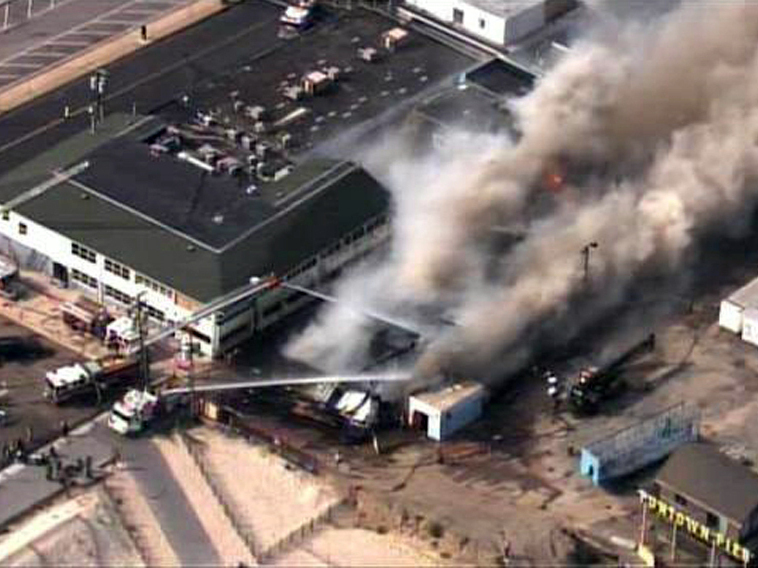 Firefighters battle a raging fire on boardwalk in Seaside Park, N.J., on Thursday.

A fire that started in an ice cream shop is spreading elsewhere along New Jersey's famous boardwalk in Seaside Park.

News video shows the boardwalk — located in an area that had just been rebuilt after it was destroyed by Superstorm Sandy nearly a year ago — clouded by thick smoke.

By 4:30 p.m., firefighters were ordered to pull back because of the intensity of the flames, officials told newspaper.

"The problematic winds that are helping spread the fire are moving at about 10 to 20 miles per hour in the southern direction, according to Jim Bunker, a meteorologist with the National Weather Service's Mount Holly station. Thunderstorms are expected in the area of Seaside Heights and Seaside Park in the next two to three hours, and that could change the winds that are giving firefighters difficulty, Bunker said."

"Firefighters from surrounding towns responded to the fire scene a couple blocks south of the Funtown Amusement Pier. By 5:30 p.m., 14 structures were reportedly enflamed. Six blocks north of Funtown, a condominium complex was evacuated.

The large blaze is just south of one of the most iconic scenes of Hurricane Sandy, where a Carousel Pier rollercoaster was found in the ocean just off the beach in the superstorm's wake last year."

The Star-Ledger quotes Boyd as saying several firefighters and residents are being treated for smoke inhalation. The cause of the fire is under investigation.

"When I got my first briefing before I left Trenton to come here, I said to my staff, 'I feel like I want to throw up," Gov. Chris Christie said about the fire during a televised press conference, a few minutes ago. "After all the effort and time and resources that were put in to help the folks at Seaside Park and Seaside Heights rebuild — to see this going on is just unthinkable."

Christie said the fire is still not contained, even though firefighters have dug up the boardwalk and a huge trench north of the fire to stop it from spreading.

At this point, they are hoping the trench will stop the fire. Another bright spot, said Christie, is that a cold front is expected to move through the area shortly and it will bring rain and a shift in wind direction, which will help contain the fire.