Accessibility links
Colorado Gets Brief Break From Flood Warnings; Rain Is Forecast : The Two-Way The rains that brought severe flooding have eased, allowing people who in northern and central Colorado a chance to regroup before more rain comes, possibly as soon as Saturday afternoon. The floods have been blamed for four deaths.

Colorado Gets Brief Break From Flood Warnings; Rain Is Forecast

Colorado Gets Brief Break From Flood Warnings; Rain Is Forecast 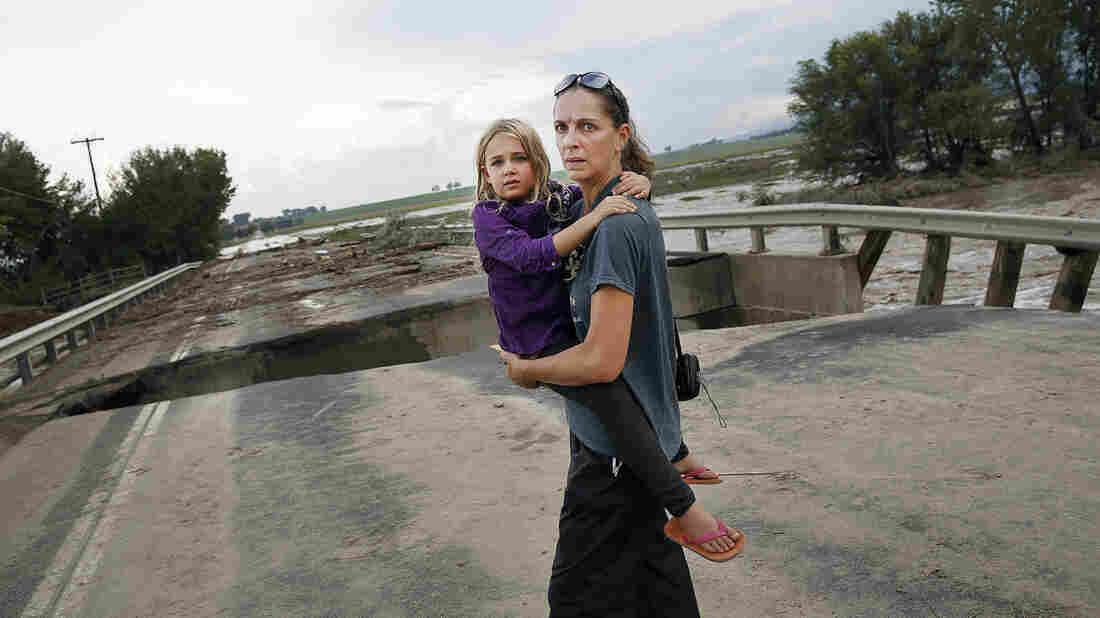 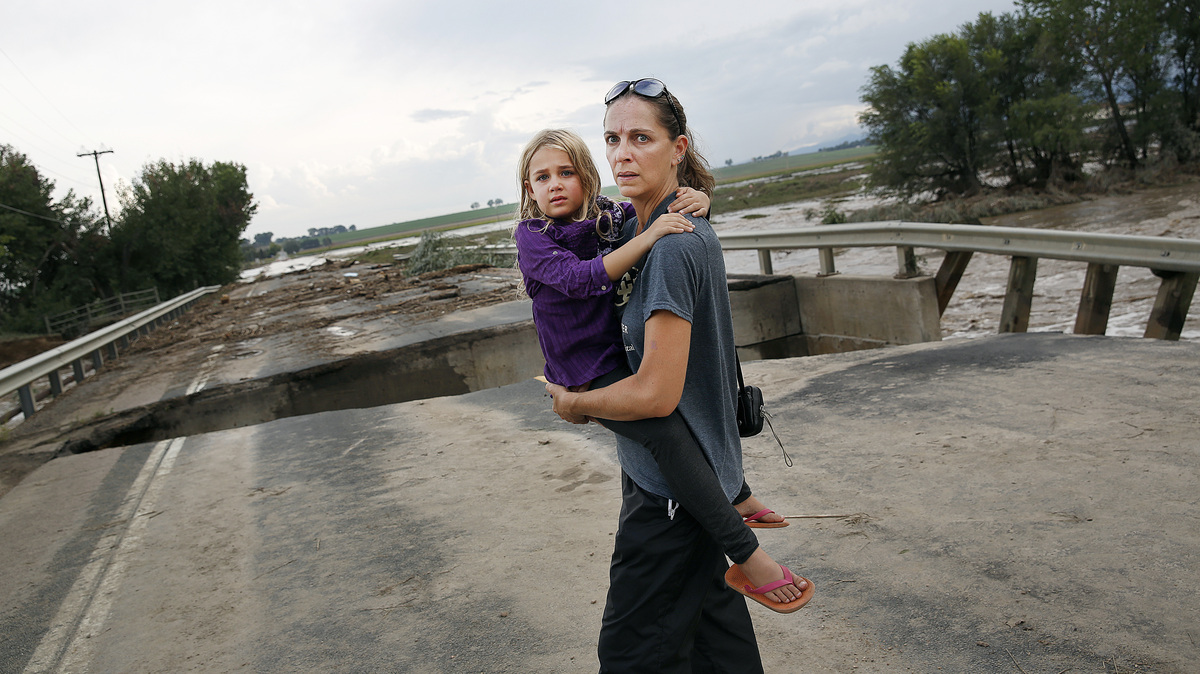 Samantha Kinzig of Longmont, Colo., and her daughter Isabel, 5, took a close look at a damaged bridge in Longmont Friday. Heavy rains that fueled widespread flooding in numerous Colorado towns have eased, but forecasters predict more on Saturday and Sunday.

The rains that brought severe flooding to parts of northern and central Colorado have eased, allowing people a chance to regroup before more rain comes, possibly as soon as Saturday afternoon. Thousands of residents have been displaced by the flooding, from Fort Collins in the north to Colorado Springs in the south, since waters hit dangerous levels Wednesday.

The floods have been blamed for four deaths, as the Two-Way reported Friday.

First responders are using the break to find people stranded by the waters — including one driver who told local KUSA News TV that he survived being trapped underwater by finding a bubble of air in his car. The man says he remained there for about two hours before help arrived.

More than a dozen aircraft are working in Boulder County, trying to deliver essential items like food and water to people cut off by the floodwaters.

For NPR's Newscast unit, Nathan Heffel of member station KUNC reports that so far, the rains have held off, allowing rescue personnel to focus on trying to find hundreds of people who remain unaccounted for. Heffel quotes Boulder County Sheriff Joe Pelle:

"We're assuming that some of them made their way out, and simply haven't contacted us, or friends or family, to get pulled off the list. We're assuming that there may be further loss of life or injuries. We have to assume that. I hope and pray that's not the case."

Boulder County officials urge survivors to use the Red Cross "Safe and Well" tool to alert others of their status.

And they're sending residents to the CDC website, to read up on cleaning and sanitizing a house that has withstood a flood.

The National Weather Service has issued a flash flood watch from noon Saturday to late Sunday in northeast and north central Colorado.

"Flooding continues over a wide section of northern Colorado from the Rocky Mountain foothills to towns on the western region of the eastern plains. Officials in Boulder County, one of the hardest hit, says scores of people in mountainous areas remain without water, electricity, or proper sewage facilities.

"Ben Pennymon with the Boulder Office of Emergency Management says residents need to understand this will be an ongoing event.

" 'Continue to be vigilant. The roads are, in a lot of places, are still impassable. So just — it's not over yet,' Pennymon says. 'We're not in the clear, especially with the rain that is anticipated for this afternoon.'

"A Type 2 federal management team has been put in place to help oversee search and rescue and recovery operations in the County. Hundreds remain unaccounted for."

Flash floods have complicated rescue efforts, after coursing rivers of water crumbled roads and filled them with debris. High water has forced the closure of parts of I-25 from the Wyoming border to Fort Collins, according to state transportation officials. That closure was still in effect early Saturday.

The U.S. Department of Transportation has released $5 million in emergency relief funds to aid with recovery efforts, Colorado Gov. John Hickenlooper said Friday night. The governor declared a disaster emergency in 14 counties earlier in the day.

In a letter detailing how to help victims recover, Hickenlooper calls the event "a 100-year flood."

Here's what residents were saying Friday, as reported by Colorado Public Radio:

"A lot of people were up two nights in a row trying to fight the water," said Sasha Fernandez.

"It's just kind of been non-stop," Boulder resident Nick Carter said. "Mostly non-stop adrenaline trying to battle the water as it comes and try to redirect it from around the house.

"There was cascading over some rocks in the front. There was just giant rapids like God's wrath."

"It literally took about an hour and half before I could see my ground," said Mike Robins, who lives in a second story apartment above a self storage facility he manages on Arapahoe Avenue and 55th St.

"Whitewater rapids rushed down through our entire facility. It was like a water park. You could have gone inner tubing down into the back and ended up in the railroad tracks."

"I think everyone was in shock a little bit yesterday, and today the reality is really setting in."

The National Weather Service is predicting drier and warmer weather to persist next week, beginning Monday.