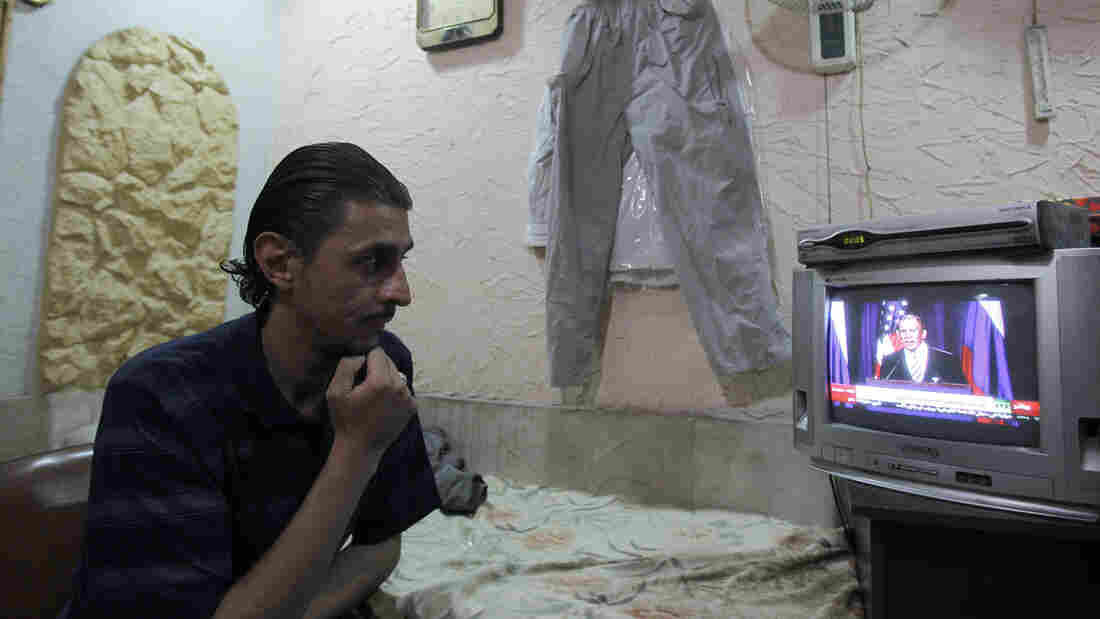 The Syrian regime calls a new deal on its chemical weapons a victory, in a reaction that came one day after the U.S. and Russia announced the plan. On Saturday, live coverage of the the deal drew the attention of a Damascus flower shop owner. Anwar Amro/AFP/Getty Images hide caption 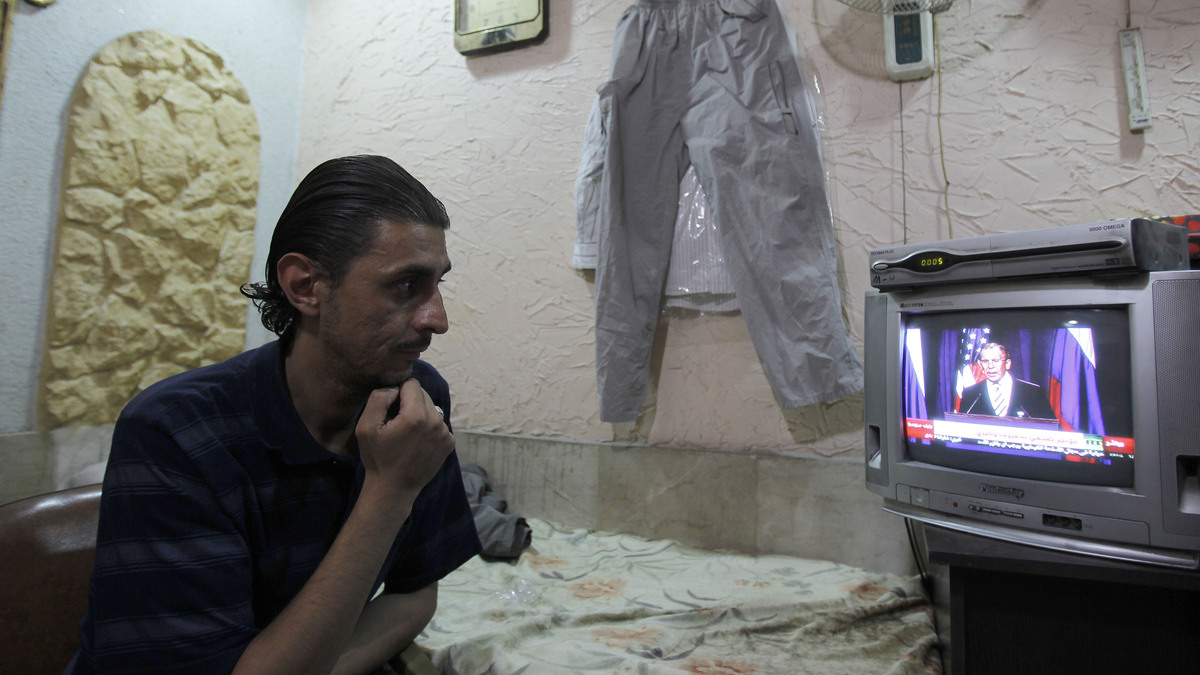 The Syrian regime calls a new deal on its chemical weapons a victory, in a reaction that came one day after the U.S. and Russia announced the plan. On Saturday, live coverage of the the deal drew the attention of a Damascus flower shop owner.

One day after the United States and Russia announced a deal to rid Syria of its chemical weapons, the first official reaction has emerged from the Syrian regime, which calls it a "victory." Syria's rebels are criticizing the plan, saying it doesn't punish President Bashar Assad.

The plan, which details the extent of Syria's chemical weapons arsenal, calls for the weapons' destruction by the middle of next year. As we reported Saturday, Secretary of State John Kerry, who brokered the deal in Geneva with his Russian counterpart Sergei Lavrov, said that "there can be no games" to avoid full compliance.

"We welcome these agreements," Syrian National Reconciliation Minister Ali Haidar tells Russian news agency RIA Novosti. "On the one hand, they will help Syrians come out of the crisis, and on the other hand, they prevented the war against Syria by having removed a pretext for those who wanted to unleash it [war]."

Crediting the work of Russia's leaders, Haidar said, "This is a victory for Syria won thanks to our Russian friends."

Before that statement came out Sunday, Syria's state news agency, SANA, had restricted itself to announcing the U.S.-Russia agreement and noting the lack of an overt military threat.

A central figure in Syria's rebellion spoke out against the U.S-Russia plan Saturday. The rebels, who have been trying to oust Assad for more than two years, had been calling for air strikes against the Syrian government.

"Rebel Gen. Salim Idriss stated his objections soon after the Geneva announcement," NPR's Deborah Amos reports for our Newscast unit. "He heads the Supreme Military Council, rebels backed by the West and Gulf Arab states. He said the agreement, which includes U.N. inspectors on the ground by November, allows the Syrian president to escape responsibility for killing hundreds of civilians in an alleged gas attack in August."

"What about the murderer Bashar who gave the order? Should we forget him?" Idriss said at a news conference in Istanbul. "We feel let down by the international community. We don't have any hope."

Rebels have also complained that Syria has been moving its chemical weapons around, perhaps even into neighboring countries, to frustrate attempts to catalog and destroy the arsenal.

In Israel, where U.S. Secretary of State John Kerry traveled to discuss the deal, the U.S.-Russia plan met with muted enthusiasm.

"We hope the understandings bear fruit. Those understandings will be judged by the results," Prime Minister Benjamin Netanyahu said Sunday. President Shimon Peres said that "a disarmament agreement backed up by military threat should serve as a lesson to Iranian leaders."

The Israeli leadership addressed the question of Syria during Sunday's commemoration of the 40th anniversary of the Yom Kippur War.