Accessibility links
Striking Images, Personal Stories Emerge From Kenyan Mall Attack : The Two-Way Survivors' accounts and photographs provide new detail to the chaos that erupted Saturday. Attackers used grenades and guns to begin a standoff in a Nairobi mall that lasted into Sunday. 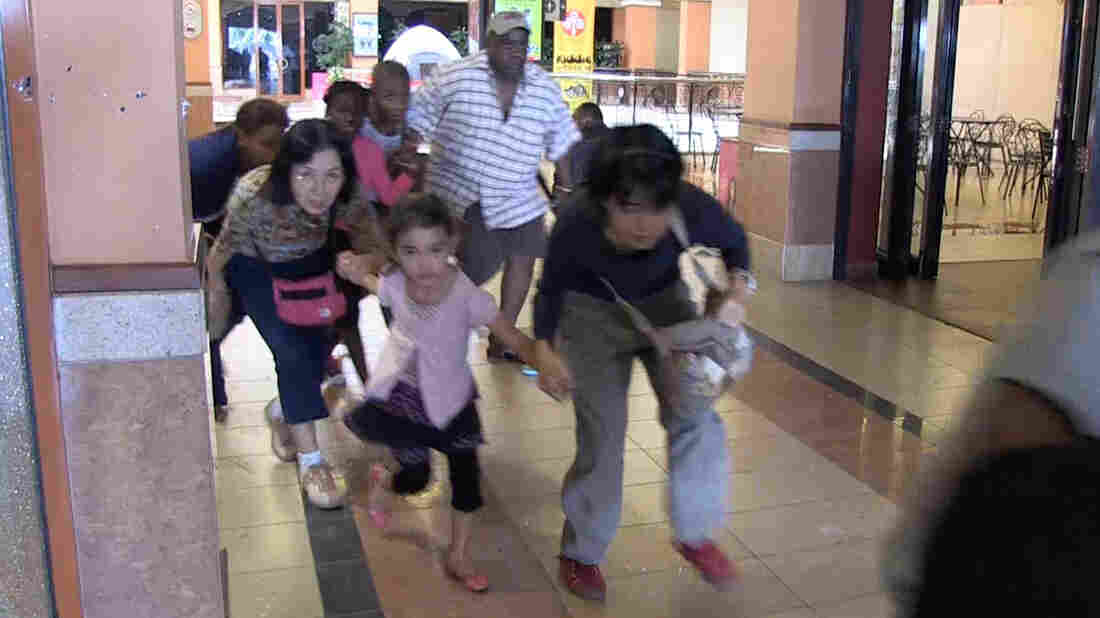 Civilians try to move to safety in a Nairobi shopping mall, where a standoff that began Saturday has lasted into Sunday. Images and witness accounts depict harrowing scenes inside the mall. AFP/AFP/Getty Images hide caption 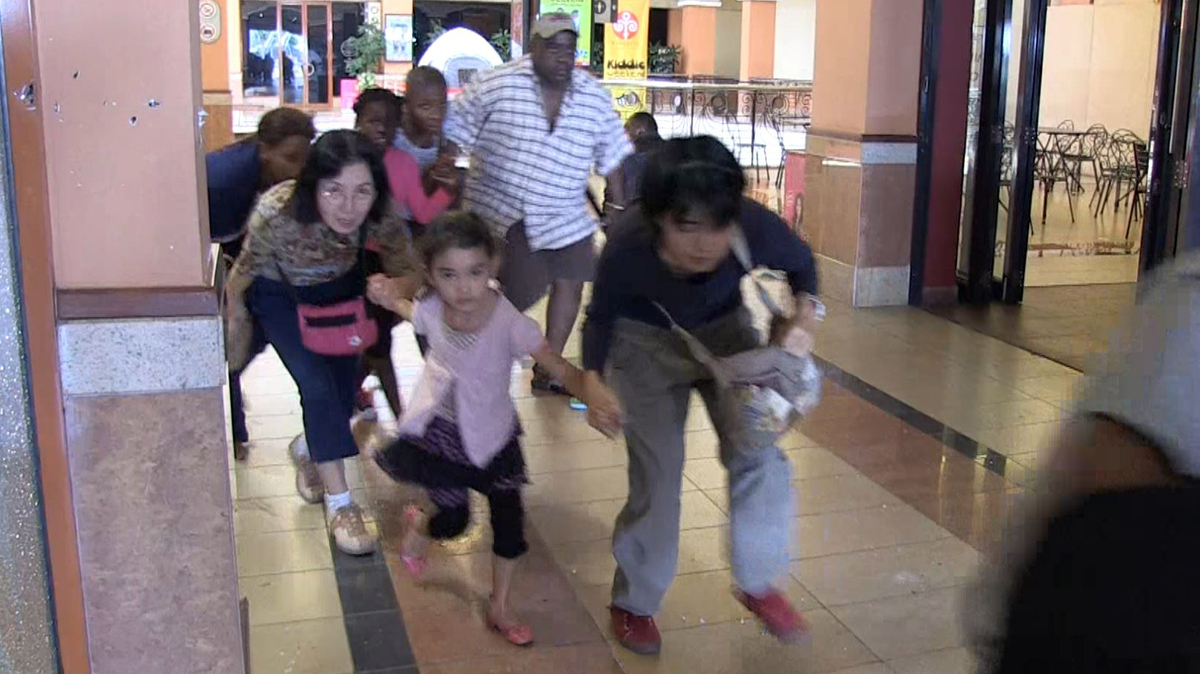 Civilians try to move to safety in a Nairobi shopping mall, where a standoff that began Saturday has lasted into Sunday. Images and witness accounts depict harrowing scenes inside the mall.

One day after panic and confusion took over a shopping mall in Nairobi, survivors' accounts and photographs provide a close-up perspective of the scene. Their stories have given new detail to the chaos that erupted after attackers used grenades and guns to begin a standoff that lasted into Sunday.

A teenager tells Agence France-Presse about the chaos that broke out just as he was leaving the mall's rooftop parking lot.

"I got scared. I tried to run down the stairs and saw someone running towards the top, I ran back and hid behind one of the cars," Umar Ahmed, 18, said.

Lying on the ground, he played dead. Speaking to AFP from the hospital, where was recovering from burn wounds, Ahmed said an attacker came to look at him.

"Thankfully he turned back," he said. "After a while, the police came and we were able to be evacuated."

Mall employee Sudjar Singh tells the news agency, "The gunmen tried to fire at my head but missed. At least 50 people were shot. There are definitely many casualties."

The desperate hours that followed the attack were also captured by New York Times photographer Tyler Hicks, who was able to get inside the building. His images show a human struggle to survive, set against the incongruous backdrop of glitzy shops and cafes. You can see them at the Times site; we warn you that some of the photos depict scenes of bloodshed.

In an interview at The Times, Hicks explains what drew him to spend about two hours in the mall. He says he happened to be nearby — and when he saw people running away from the building, he ran toward it. He eventually accompanied police who were clearing sections of the mall.

"There were many civilians who had barricaded themselves inside shops, inside the movie theater, inside restaurants, inside a beauty salon — it seemed like everywhere you went, there were more people who just appeared out of the woodwork," Hicks says.

Another point of view comes from the AP's Jason Straziuso, who faced unique difficulties in covering the traumatic event. Straziuso reported on the attack, even as he tried to help friends visiting him in Nairobi — and who were trapped inside the mall Saturday. Later, he wrote about the more personal side of the story.

The visiting family had been separated, with the mother who was eight months pregnant seeking safety on the roof and her husband and daughter hiding in a back room. They communicated via texts and phone calls.

"'Jason, can you make sure the police know there are civilians on the roof?' she asked me. One person had stuck his head over the side and was greeted with a bullet, likely from police."

The family eventually reached safety — but as Straziuso notes, for many, the day ended in tears.