Accessibility links
Kenyan Police Say They're 'In Charge' Of The Mall : The Two-Way Kenya's Ministry of the Interior said more than 10 suspects had been arrested. At last count, the three-day siege had claimed 62 lives. An Islamist militant group from Somalia has claimed responsibility.

Kenyan Police Say They're 'In Charge' Of The Mall 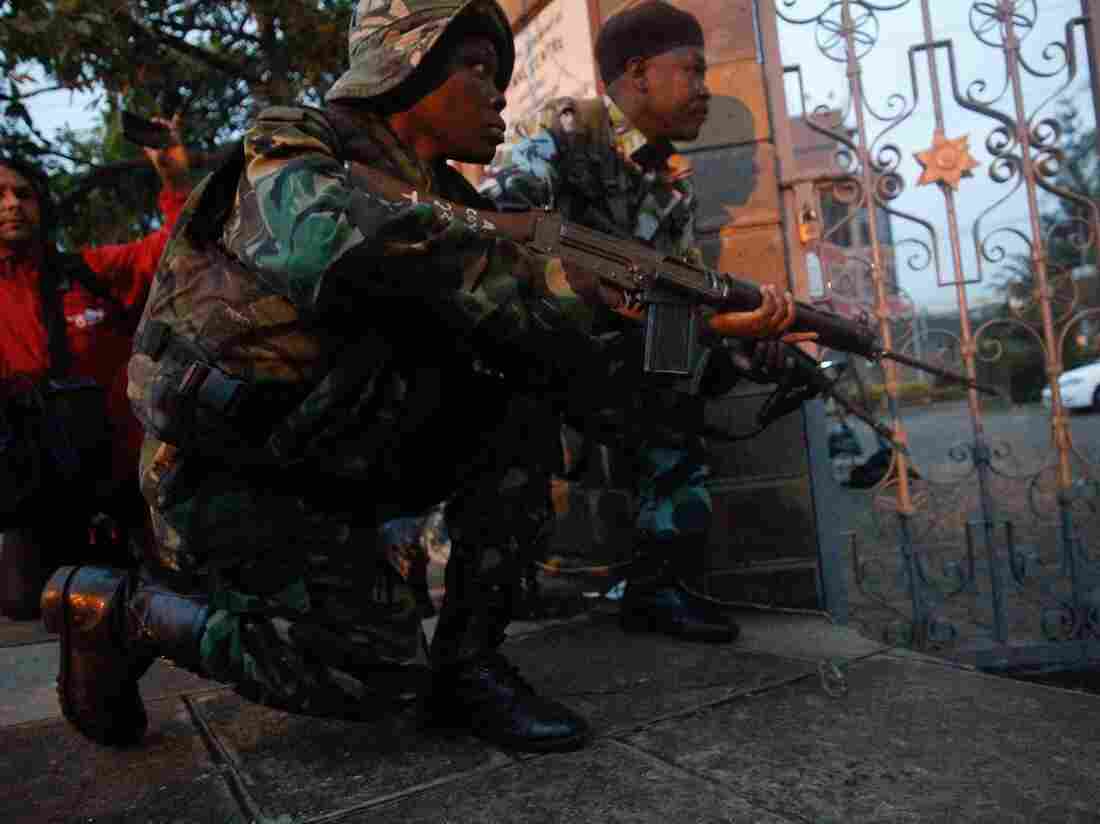 Kenyan soldiers outside the Westgate shopping mall in Nairobi on Monday. Inside, attackers had killed dozens of shoppers, wounded more and it was feared they also had hostages. Daniel Irungu /EPA/Landov hide caption 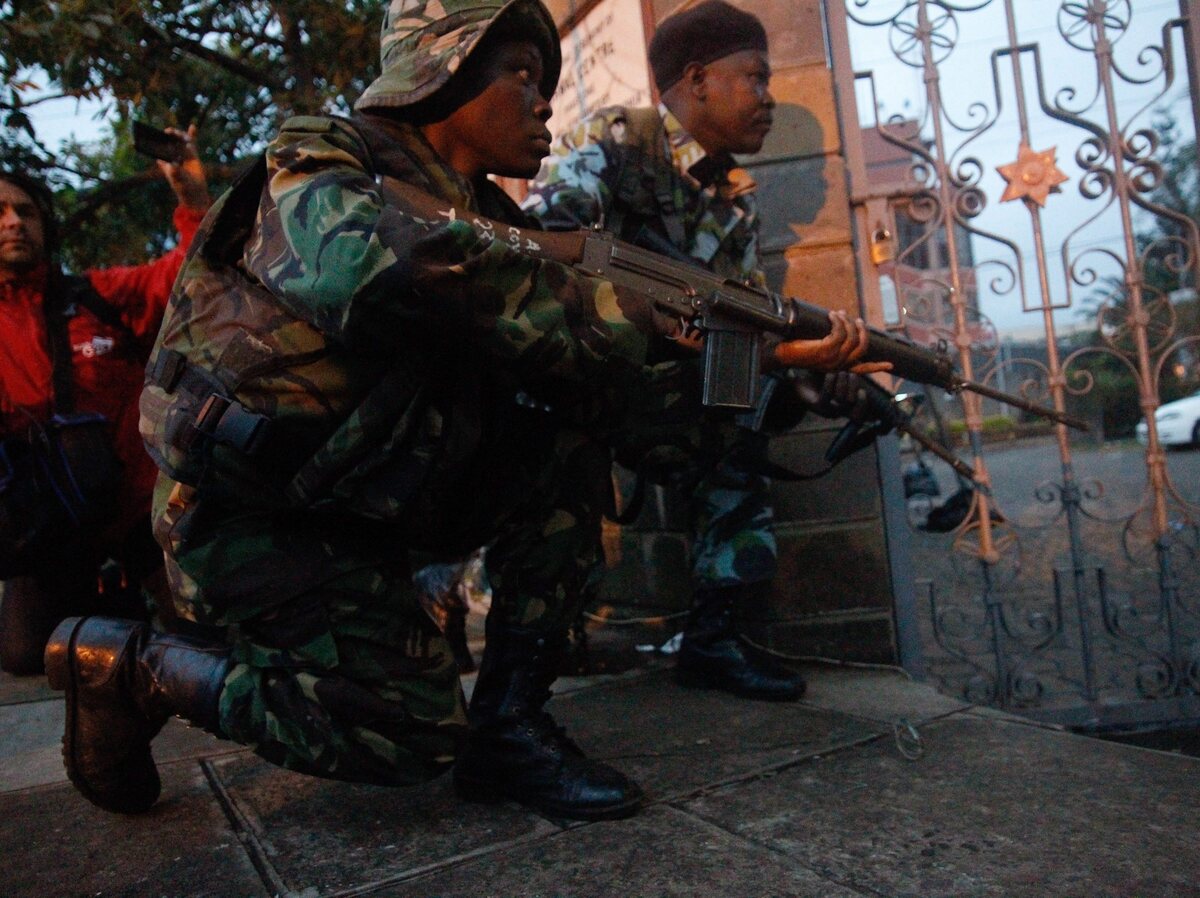 Kenyan soldiers outside the Westgate shopping mall in Nairobi on Monday. Inside, attackers had killed dozens of shoppers, wounded more and it was feared they also had hostages.

(We're adding to the top of this post as news comes in, and also posting updates here.)

On this third day of a deadly standoff at the Westgate Mall in Nairobi, Kenya, where dozens of people have been killed and more have been wounded by gunmen claiming to be part of a militant Islamist group, Kenyan officials are saying they believe the siege is over.

On its official Twitter feed, the national police said they were "in charge" of the situation and Kenya's Ministry of the Interior said more than 10 suspects had been arrested.

"Man-to-man fight is when the winner has one more round in his magazine," the nation's police chief, David Kimaiyo, said on Twitter. "We don't quit a battle worth winning. We've ashamed the attackers." 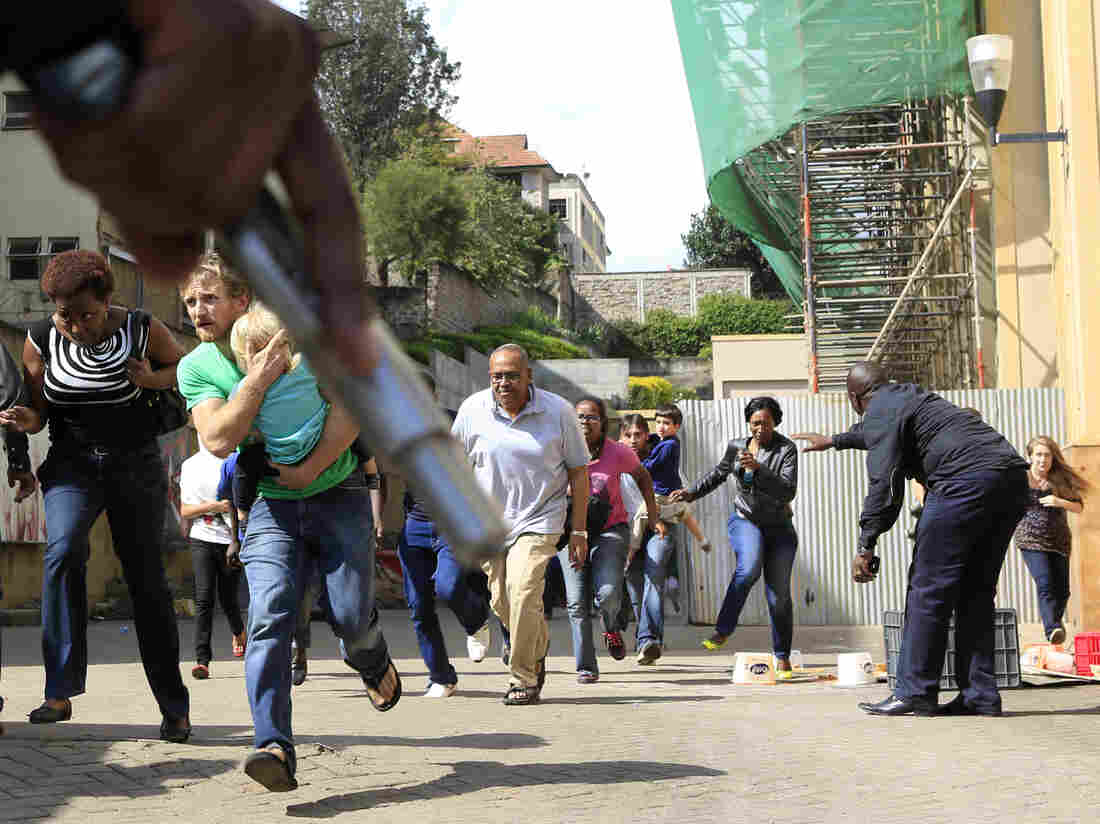 A police officer's hand, holding a gun, as security personnel pointed people to safety Saturday at the Westgate Mall in Nairobi. Among those in the photo is a friend of Associated Press correspondent Jason Straziuso. It's the man who is clutching his daughter as they run by. Noor Khamis /Reuters/Landov hide caption 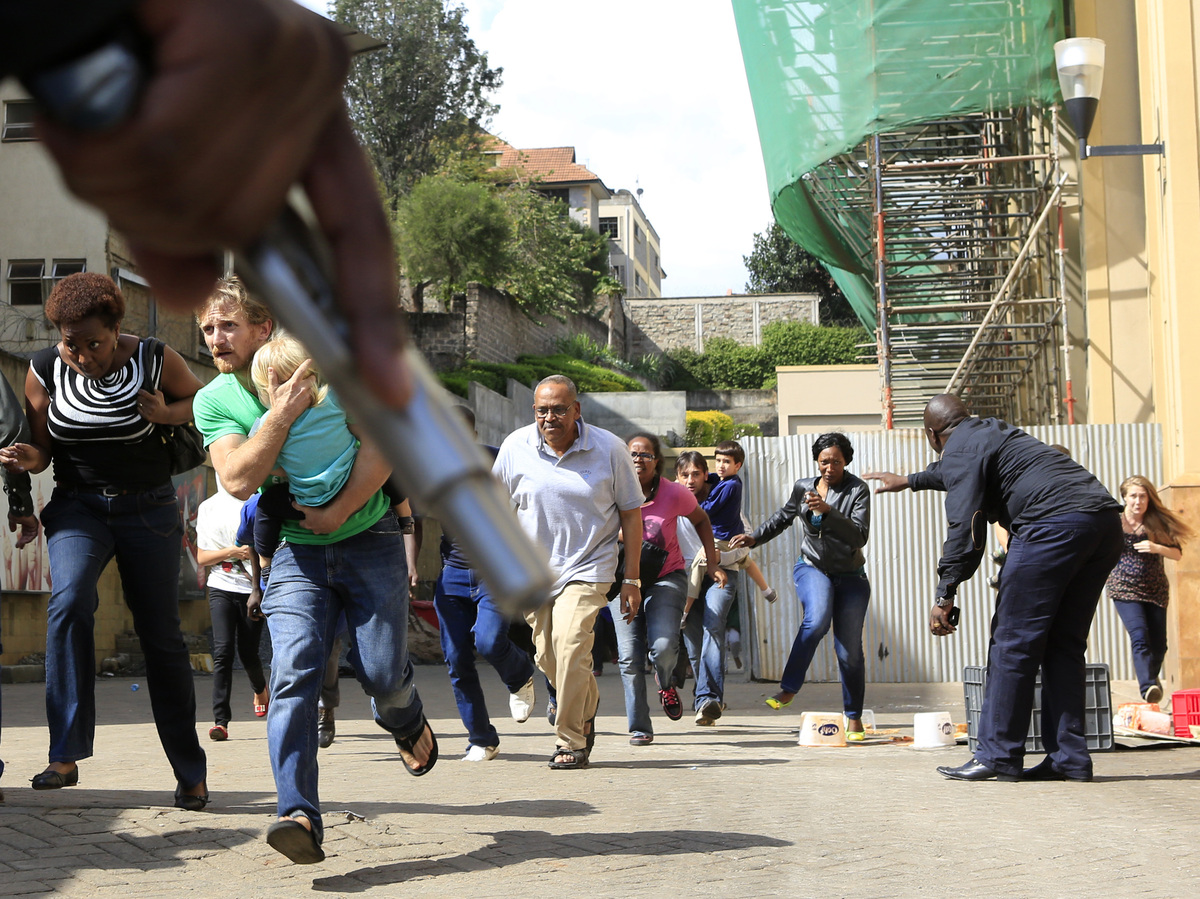 A police officer's hand, holding a gun, as security personnel pointed people to safety Saturday at the Westgate Mall in Nairobi. Among those in the photo is a friend of Associated Press correspondent Jason Straziuso. It's the man who is clutching his daughter as they run by.

The AFP quotes a government spokesman as saying that all hostages are believed to have been evacuated from the mall.

Not an hour had passed, however, before the AP quoted a "security expert with contacts inside the mall" saying that "at least 10 were still being held by a band of attackers."

Meanwhile, shoppers' harrowing stories continue to emerge. Monday on NPR's Tell Me More, Associated Press correspondent Jason Straziuso shared more about what happened to friends of his who were inside the mall. The couple and their young daughter fled to the rooftop. When they called for help "I could see the fear spreading across my wife's face," Straziuso said, "and I heard her say 'just get down and stay low.' That's not something you want to hear on the phone."

Eventually, the friends made it to a storeroom inside the mall. After several hours, security personnel came to take them to safety. "There's this picture taken by a Reuters photographer of Nick [his friend] holding [daughter] Julia tightly," Straziuso said. "It's a gripping photograph because in the foreground there is a gun — a police officer's gun — pointed down at the ground and Nick and Julia are just running right by."

Earlier in the evening on Monday, smoke could still be seen rising from the mall. The scene quieted down after "multiple large explosions" were heard, The Associated Press says.

The death toll was said to be at least 62. (At 7:20 a.m. ET, government spokesman Lenku said earlier reports of 68 deaths were incorrect.) At least 175 people were said to be wounded.

An unknown number of people were inside the mall until early evening, local time. Some may have been hostages. Others may have been barricaded inside shops or restaurants.

The group that has claimed responsibility is al-Shabab. It's one of several Islamist militant organizations in Africa that, as NPR's Dina Temple-Raston has reported, has been of increasing concern to the U.S. intelligence community.

The AP writes that:

"Al-Shabab has warned for two years that it will attack Kenya in retaliation for the country's leading role in sending troops to Somalia in 2011 and effectively reducing the extremist group's power in Somalia. Al-Shabab also claimed responsibility for the July 2010 suicide bombings in Kampala, Uganda, that killed more than 70 people watching a World Cup final soccer match at a restaurant popular among foreigners. Ugandan troops also are fighting in the African force in Somalia.

"The group has staged ongoing major attacks within Somalia for years. ... Al-Shabab and al-Qaida in February 2012 announced their alliance, with al-Shabab leader Mukhtar Abu Zubair pledging allegiance to the global terror movement."

NPR's Gregory Warner, who is in Nairobi, said earlier Monday on Morning Edition that eyewitness accounts and closed-circuit footage indicate that 10-15 attackers entered the mall and started by firing indiscriminately on people in cafes and restaurants on Saturday. Later, the attackers were "clearly very selective," he added. They separated people by age, gender and whether they "could speak a Muslim prayer." Witnesses say some people who could convince the attackers that they were Muslims were allowed to go.

In an interview with Margaret Warner of PBS Newshour, Kenyan Foreign Minister Amina Mohamed said that the international community "must do better" to work together to prevent future terrorism.

She also said that based on information they have that "two or three Americans" and a British citizen, a woman, were among the attackers. So far the source of that information is not yet known.

Not an hour had passed, after the government declared victory, before the AP quoted a "security expert with contacts inside the mall" saying that "at least 10 were still being held by a band of attackers."

"We are in charge of the #WestGate situation and more updates will be coming your way. #WeAreOne"

"Man-to-man fight is when the winner has one more round in his magazine.We don't quit a battle worth winning. We've ashamed the attackers. IG"

Update at 4:19 p.m. ET. World Should Stand Against Senseless Violence:

Speaking alongside Nigerian President Goodluck Jonathan at the U.N., President Obama expressed his condolences on Monday.

"We stand with them against this terrible outrage that's occurred," Obama said, adding that he was sure Kenya would rebuild.

"This, I think, underscores the degree to which all of us as an international community have to stand against the kind of senseless violence that these kinds of groups represent. And the United States will continue to work with the entire continent of Africa and around the world to make sure that we are dismantling these networks of destruction," Obama said.

It was the Kenyan Red Cross that was the source earlier in the day of reports that there had been at least 68 deaths. Now, though, it tweets that:

"Death Toll is 62, figures we posted earlier was as a result of double counted bodies moved from morgue to morgue ^PO"

After hiding with more than 50 other people in a storage room for about four hours, a woman who would identify herself only as Lauren tells Morning Edition that security personnel got to them Saturday and led the group out.

"I was just thinking ... I'm happy to be leaving ... get me out," she said to host David Greene. As they left, Lauren said, the group saw some blood and scattered shoes. While barricaded, they had heard gunshots and explosions.

It wasn't until a day later, on Sunday, "that the full situation hit me," Lauren added. The worst part, she said, is "knowing that there's still people in there."

We followed the news from Nairobi over the weekend in posts headlined: