Golden Eagle Attacks Deer, A Photo Of An Epic Confrontation

Golden Eagle Attacks Deer, A Photo Of An Epic Confrontation 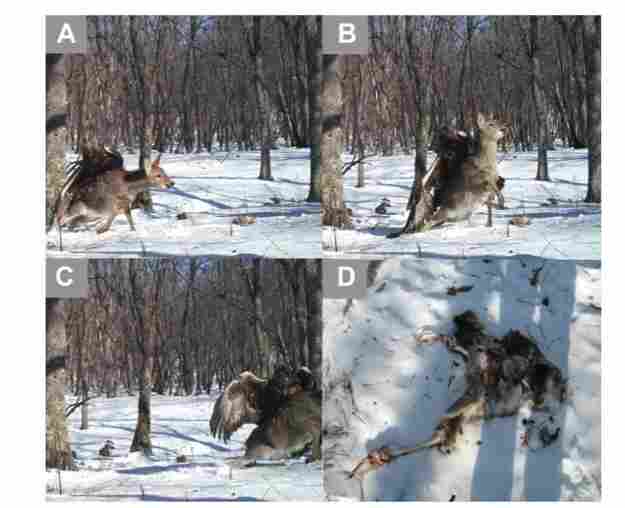 For decades, circumstantial evidence has shown that golden eagles do indeed attack large mammals like deer and even bear cubs.

But in a paper published Monday in the Journal of Raptor Research, Linda Kerley of the Zoological Society of London and Jonathan Slaght of the Wildlife Conservation Society unveiled stunning images of an adult golden eagle attacking and killing a young sika deer, weighing 88 to 100 pounds.

The images were captured by a camera trap the researchers set up to study Siberian tigers in the Russian Far East.

Instead, the cameras captured what the authors of the paper say may be the first "documentation" of such an attack.

"In 11 [years] of our investigations of ungulate kills in the southern Russian Far East, this is the first time we observed evidence of a Golden Eagle killing any deer species, despite locating hundreds of carcasses during that time and assessing cause of death," the authors wrote.

The fact that evidence of this kind of predation is so rare, the scientists write, likely means that eagles see this as an "opportunistic" attack.

In a statement, Kerley said they first came upon the carcass during a routine camera check and she immediately knew something was odd.

"There were no large carnivore tracks in the snow, and it looked like the deer had been running and then just stopped and died," Kerley said. "It was only after we got back to camp that I checked the images from the camera and pieced everything together. I couldn't believe what I was seeing."

Our big question was: How did an eagle manage to kill that big an animal? Was it a lucky hit with its beak or talons?

Slaght told us they don't know.

"We can speculate that the deer just dropped of stress, but there is precedent for golden eagles actually killing large ungulates," he said.

For example, a 2005 paper in the Western North American Naturalist found strong evidence that a golden eagle killed a pronghorn. The scientists saw a golden eagle in the vicinity of a freshly killed 60-pound pronghorn. A necropsy found the carcass had no bite marks, but it did have puncture marks consistent with the type made by talons. The pronghorn, the scientists found, was likely killed when its cervical vertebrae were fractured.

"I would assume something like that is the most likely scenario here," Slaght said about the sika deer attack. He added: "Birds of prey usually use their talons to kill. They don't want to risk eye injury by going after something still alive with their beaks."

Dr. Linda Kerley sent us a little more on how the deer may have died:

"It is true that we cannot say for sure how the deer died and it could have died from stress, but I do believe it happened quickly because the first vulture showed up and was photographed in the same camera trap just 68 minutes later followed by other avian and mammalian scavengers. This was the first time I have ever photographed a vulture in a camera trap so I assume they were attracted to the deer carcass. Tracks in snow also showed no indication that the deer struggled for long."