Accessibility links
House Ties Government Funding To One-Year Obamacare Delay : The Two-Way House Republicans late Saturday prepared to pass a government funding bill that would include a one-year delay in implementing Obamacare. But the White House said President Obama would veto the House measure, on the unlikely chance it made it through the Senate. 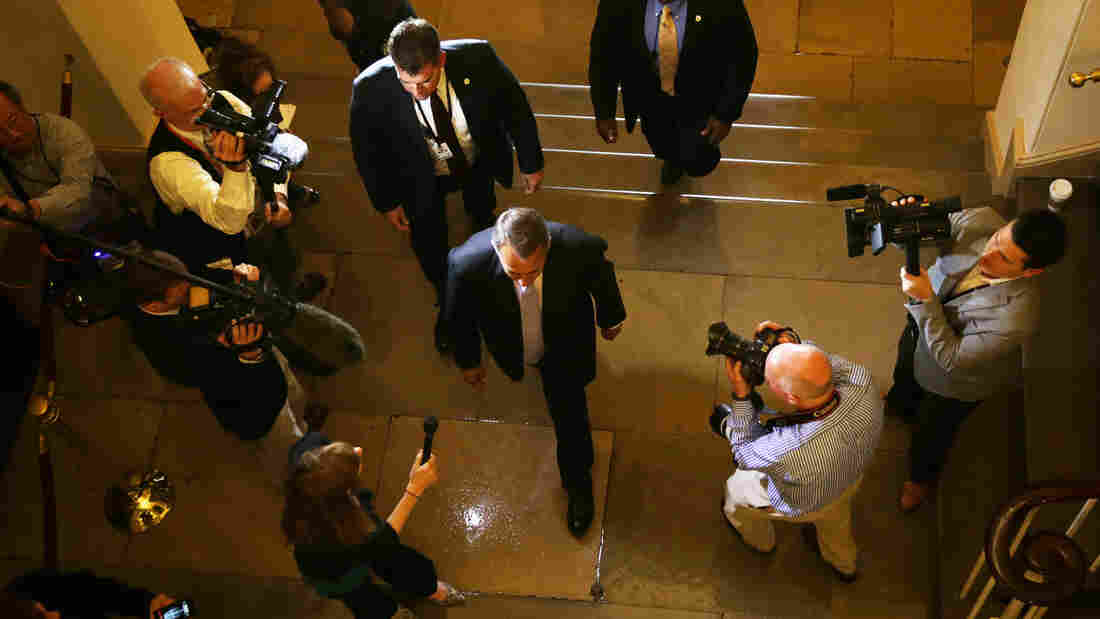 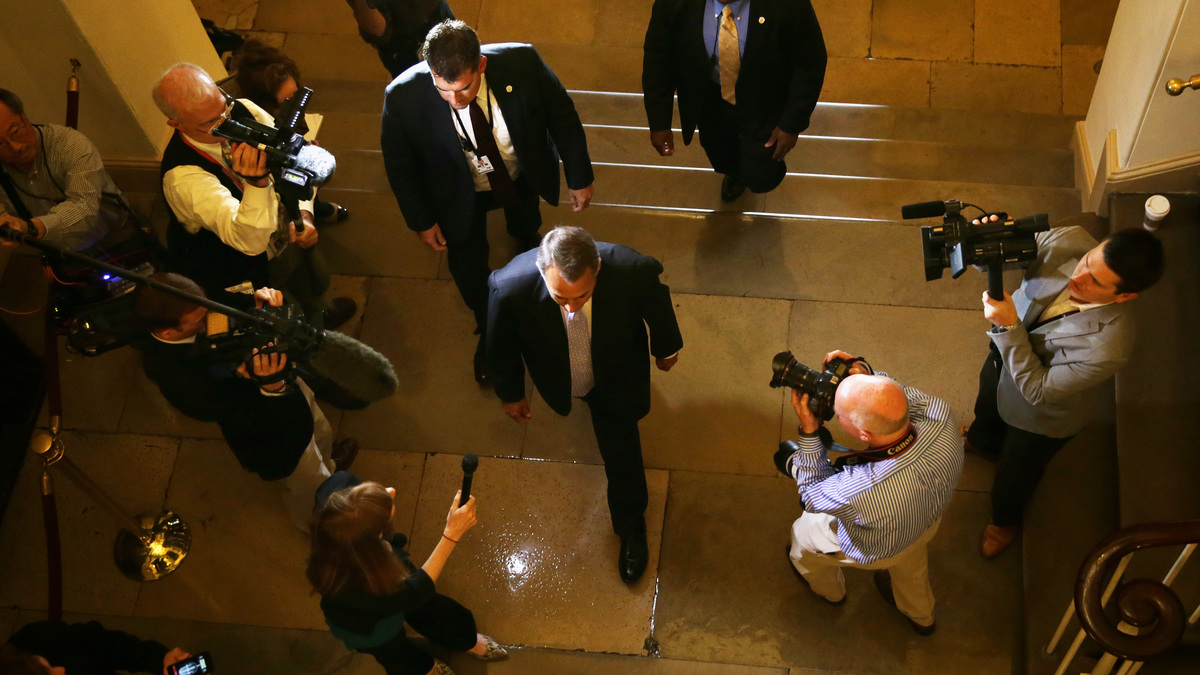 Speaker of the House John Boehner arrives at the Capitol on Saturday.

The House voted early Sunday to tie government funding to a one-year delay in implementing Obamacare, sending the dispute back to the Senate, where it is certain to get a frosty reception. The House measure also repeals the Affordable Care Act's tax on medical devices.

But with a government shutdown looming at midnight Monday, the White House said President Obama would veto the House bill, on the unlikely chance it made it through the Senate. And Senate Majority Leader Harry Reid, D-Nev., released a statement rejecting the House plan as "pointless."

House Democrats called the plan a vote to prolong the dispute and close the government down.

"Let us be very clear," Rep. Sheila Jackson Lee, D-Texas, said on the House floor. "Let us not be full of smoke and mirrors. Tonight the Republican majority will vote to shut the government down."

"We're going to give a stark choice to the president of the United States and the Senate," said Rep. John Culberson, R-Texas. "Do you want to shut down the government, or do you want to force onto the American people a 2,500-page bill that was forced through here so fast, Speaker Pelosi said we have to pass the bill to find out what's in it."

Asked what happens after the Senate inevitably rejects their version of the bill on Monday, a number of House Republicans said they didn't have the next play planned out.

The House also passed a measure that would insure the troops continue to get paid in the event of a shutdown. Democrats ripped into Republicans for what they said was unfair treatment of other government workers, who are not guaranteed back pay if they endure a closure.

"We are the board of directors of that government," said Democratic Whip Steny Hoyer of Maryland. "I can't believe there's one of us, Mr. Speaker, that would serve on a board of directors and treat a large portion of our employees with such disrespect, with such lack of consideration, with such contempt at times as we treat our civilian employees."

But Republicans defended their measure, which would keep government operations funded through the middle of December.

"This is a bill to keep the government open," said Rep. Rob Woodall of Georgia.

Early in the day, Republicans exiting their closed-door meeting said they were united behind the one-year-delay strategy.

"I think conservatives are winning," said Rep. Tim Huelskamp of Kansas. "Stop Obamacare and not stop the government is what we're hearing from folks at home, so I think leadership's listened."

Republicans insist their proposal doesn't have to lead to a government shutdown, and could even get some Democratic support in the Senate.

That is unlikely. Democratic Sen. Patty Murray of Washington state weighed in promptly after the proposal was announced:

"By pandering to the Tea Party minority and trying to delay the benefits of health care reform for millions of seniors and families, House Republicans are now actively pushing for a completely unnecessary government shutdown."

Reid issued a statement before the House voted, saying in part:

"To be absolutely clear, the Senate will reject both the one-year delay of the Affordable Care Act and the repeal of the medical device tax. After weeks of futile political games from Republicans, we are still at square one: Republicans must decide whether to pass the Senate's clean CR, or force a Republican government shutdown."

Reid also echoed a Friday statement by Obama about a willingness to discuss changes to the health care law — but not under the pressure of a government shutdown or default.

"Senate Democrats have shown that we are willing to debate and vote on a wide range of issues, including efforts to improve the Affordable Care Act," Reid said. "We continue to be willing to debate these issues in a calm and rational atmosphere. But the American people will not be extorted by Tea Party anarchists."

The House originally had expected to vote on the measure as early as 5 p.m. But five hours later, lawmakers continued to take to the House floor alternately to declare the value of the Affordable Care Act — the Democrats' position — or to claim that shutting it down for a year was needed to keep the economy afloat — the Republican view.

The House is controlled by Republicans, and a vote Saturday, if it were to take place, was expected to pass.

If the House and Senate cannot agree on a new government funding measure acceptable to President Obama by Monday night, the government would begin shutting down first thing Tuesday morning.

All eyes are on a pair of closed wooden doors in the basement of the Capitol. Behind those doors, in room HC-5, House Republicans are plotting their next move in the ongoing shutdown showdown.

On Friday, the Senate approved a short-term spending bill aimed at avoiding a government shutdown. What it didn't do was defund the Affordable Care Act. 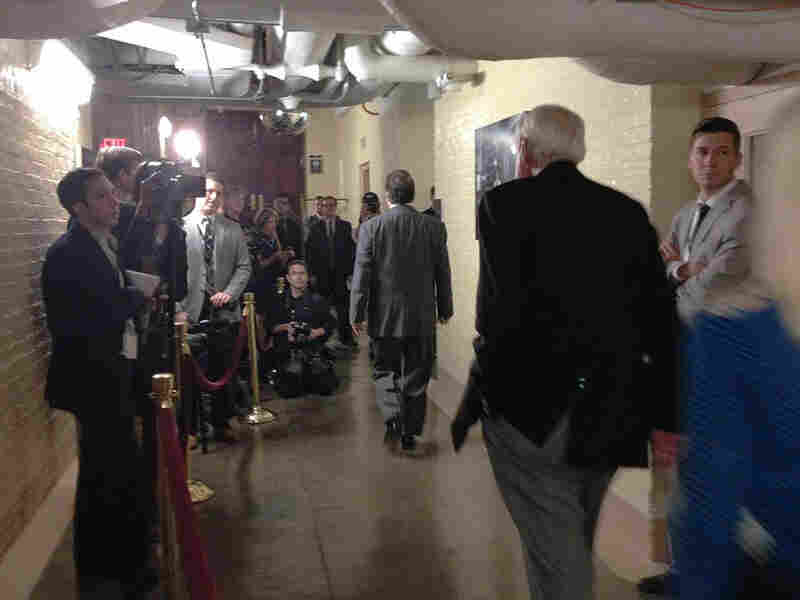 Members of the media wait outside a room in the basement of the Capitol Building in Washington, D.C., on Saturday, where House Republicans met in a closed session. Tamara Keith/NPR hide caption 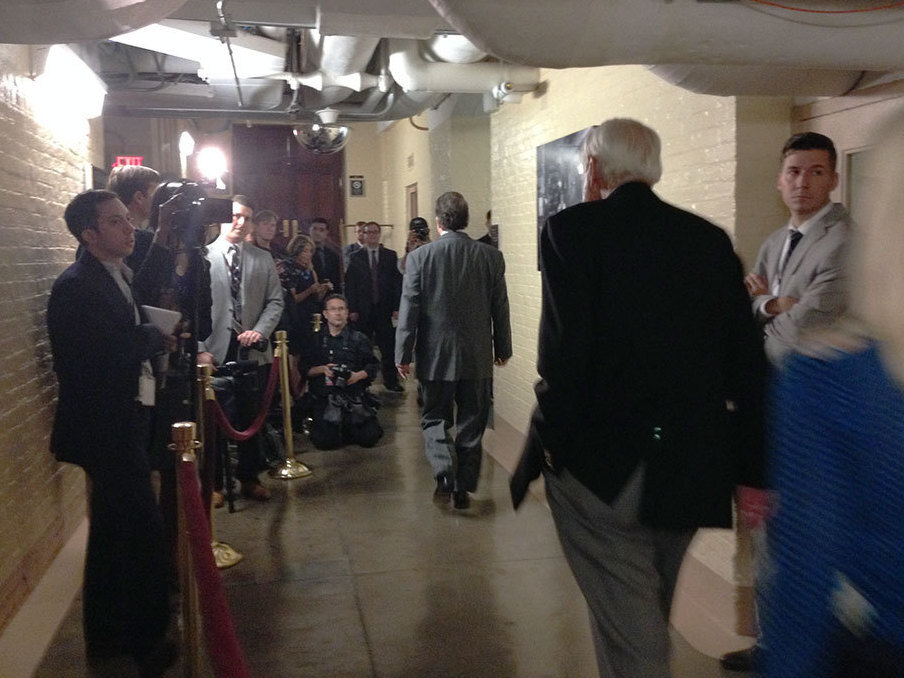 Members of the media wait outside a room in the basement of the Capitol Building in Washington, D.C., on Saturday, where House Republicans met in a closed session.

That's what a handful of Senate Republicans and a larger contingent of House Republicans have been demanding in exchange for keeping the government funded.

House Republicans say they intend to attach something to the spending bill and send it back to the Senate. Just what to attach is what's being discussed behind those closed doors.

Possibilities include a one-year delay of the Obamacare individual mandate or a repeal of the medical devices tax that's part of the law.

The key for House Speaker John Boehner is coming up with a plan that can get near unanimous support from his conference. That's because he won't be getting any votes from House Democrats.

And if one of these Obamacare-related add-ons passes, it will run into a buzz saw in the Democratically controlled Senate. At least, that was the warning Friday from Senate Majority Leader Harry Reid (Adam Jentleson is Reid's spokesman):

The countdown to shutdown is on. If there's no agreement, the shutdown starts Tuesday.

Sen. Reid, yesterday (1/2): "To be absolutely clear, we are going to accept nothing that relates to Obamacare.”

Sen. Reid, yesterday (2/2): "Any bill that continues to play political games will force a government shutdown."