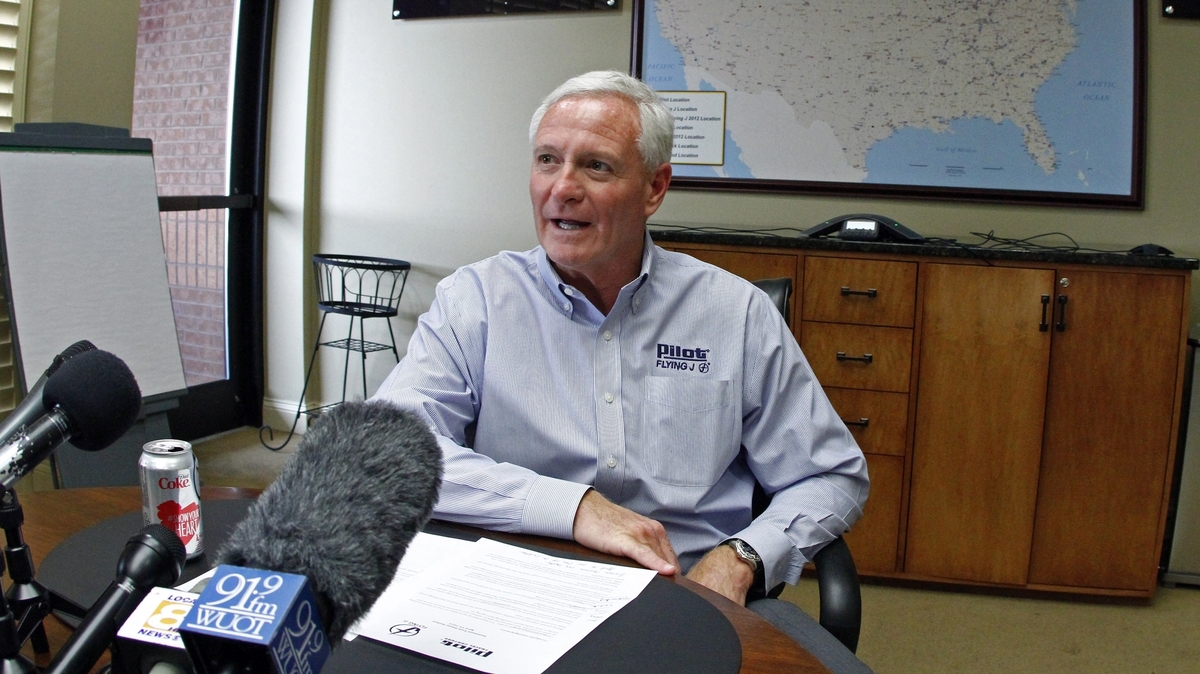 Jimmy Haslam, CEO of Pilot Flying J, discusses accusations of rebate fraud, in April. Today, Haslam said that an audit found problems with only a small number of the company's customers' accounts.

Months after federal agents raided its Knoxville, Tenn., headquarters over charges that it withheld millions in diesel fuel rebates from customers at its truck stops, Pilot Flying J says it is paying the companies that were cheated.

From Nashville, Blake Farmer of member station WPLN filed this report for our Newscast unit:

"The family-owned company is accused of withholding millions of dollars' worth of diesel rebates. Seven members of the Pilot Flying J sales staff have pleaded guilty to fraud charges, and others have been put on administrative leave during the federal investigation.

"CEO Jimmy Haslam — who also owns the Cleveland Browns — says the shortchanging represents a fractional part of the company's $30 billion in annual sales. He says most has been paid back, with interest. Still, he says the episode has taken a toll.

"'This has been a very humbling, very embarrassing time for myself, for our family and for Pilot Flying J. There's no other way to say it.'"

As Blake reports, Haslam's brother, Bill, is the governor of Tennessee.

Citing a tentative settlement deal that was reached in July, The Cleveland Plain Dealer provides details on the money at stake.

"The 38-page agreement suggests what Pilot Flying J, the nation's biggest truck-stop chain, could pay out in the settlement: more than $40 million in principal payments to trucking firms, with attorneys' fees adding up to $14 million more," the newspaper reports.

Pilot Flying J is No. 6 on the most recent Forbes list of the largest private companies in the U.S., just ahead of Publix. The company says it operates 650 truck stops; it was formed by a 2010 merger between Pilot Travel Centers and Flying J.