Accessibility links
No End In Sight As Government Shutdown Nears First Full Day : The Two-Way As the sun sets on the first day of a shutdown, lawmakers in Washington have made no progress. They're still at loggerheads. 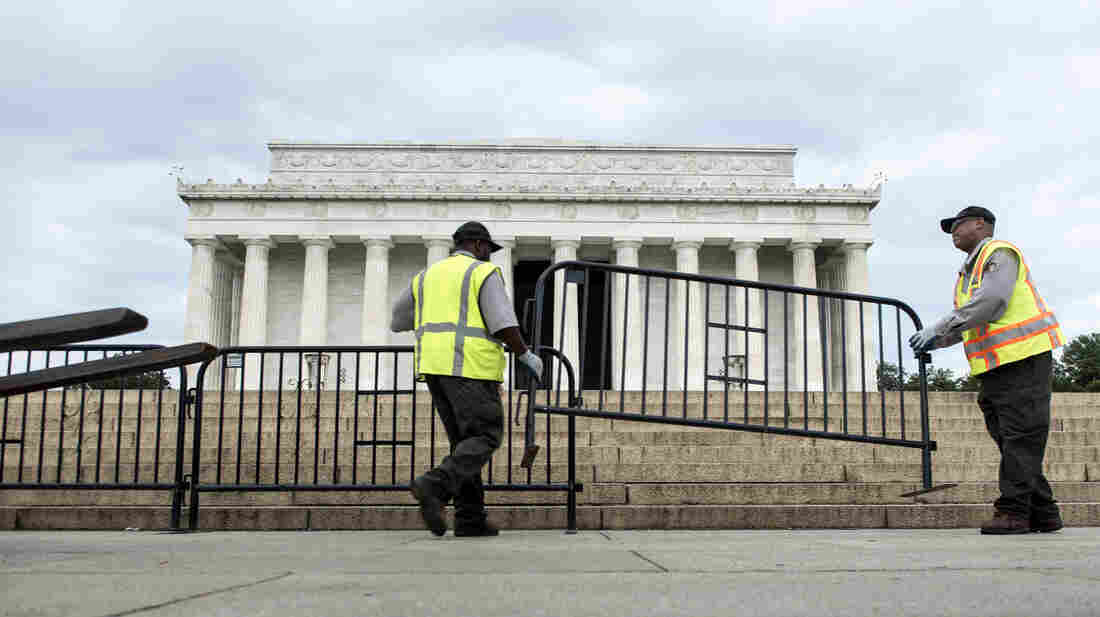 Members of the U.S. Park Service place barricades around the Lincoln Memorial on Tuesday in Washington, D.C. A partial shutdown of the federal government has led to the closing of national parks. Brendan Smialowski/AFP/Getty Images hide caption 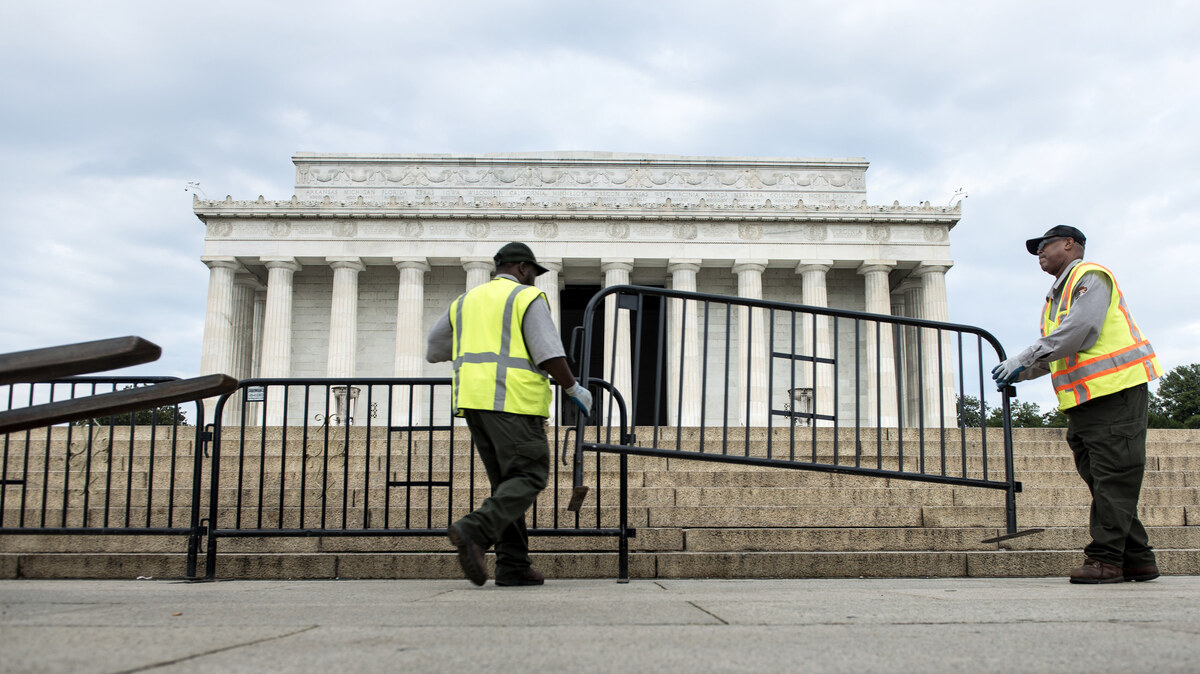 Members of the U.S. Park Service place barricades around the Lincoln Memorial on Tuesday in Washington, D.C. A partial shutdown of the federal government has led to the closing of national parks.

— Just before 10 a.m. ET, the Senate voted along party lines (54 Democrats and independents in favor; 46 Republicans against) to reject a House-passed measure calling for the creation of a special House-Senate conference committee. Republicans said that committee could negotiate on the differences over Obamacare and federal funding. Democrats said the measure was another effort by the GOP to delay or kill the health care initiative.

— A Labor Department official told The Associated Press that the highly anticipated September jobs and unemployment report will not be released on Friday, as scheduled, if the shutdown continues.

As first day of a federal government shutdown came to a close, Congress was not any closer to a resolution.

Case in point: Republicans in the House proposed three bills that would have reopened national parks, the Department of Veteran's Affairs and kept the D.C. government afloat. But all three bills didn't even make it out of the House.

In Talk Of Shutdown, A Familiar Feeling At The White House

The Shutdown: A Guide To What Would And Wouldn't Close

It leaves us more or less where we were when this impasse started.

The Republican-led House is still insisting that any legislation to keep the government running also either defund or delay key elements of the president's health care programs. And the White House and the Democratic-led Senate are insisting that Republicans back off that demand and send over a funding bill without Obamacare language.

With lawmakers in Washington at loggerheads over the same issues they've been arguing about for more than five years, the federal government has partially shut down.

Mail will still be delivered, Social Security checks will still be mailed, the exchanges that are central to the the new health care law will still kick into gear Tuesday and other "essential" services will continue.

But an estimated 800,000 federal employees are being told they can't work because the politicians haven't been able to agree on a way to fund the government.

The Special Supplemental Nutrition Program for Women, Infants and Children (WIC) is expected to soon run out of money. The IRS will likely have to suspend audits and examinations of returns. New applications for Social Security and other benefits are likely to back up.

Washington's National Zoo says it will turn off its "panda cams" (they were still operating as of 5:30 a.m. ET Tuesday; but later in the morning were switched off). National parks and museums will be closed.

It's the first time since the dramatic twin shutdowns of 1995 and 1996 that political wrangling has led to such a shutdown. This time, the Republican-led House is insisting that any legislation to keep the government running also either defund or delay key elements of the president's health care programs. The White House and the Democratic-led Senate, meanwhile, are insisting that Republicans back off that demand.

There's no end in sight, NPR's David Welna reported on Morning Edition, to what's a game of budget ping pong between the two parties:

"We are not going to be bullied," Senate Majority Leader Harry Reid, D-Nev., declared.

"They simply ignore us," House Appropriations Committee Chairman Harold Rogers, R-Ky., said of the Democrats and their rejection of the GOP's post-midnight suggestion that a House-Senate conference committee try to hammer out a deal.

Lawmakers will return to the Capitol on Tuesday to continue their back-and-forth. For his part, President Obama tells NPR that "this perpetual cycle of brinksmanship and crisis has to end once and for all."

Meanwhile, even if the two sides do at some point in coming days come to an agreement that gets the government running again, there's another ominous battle looming: The federal government's "debt ceiling" must be lifted by Oct. 17 or it risks defaulting on its debts. Republicans have already signaled that they will try to block that from happening unless they get their way on Obamacare.

Politico reports the House is planning to vote tonight on bills that will fund certain parts of the government, like the National Parks Service.

But the White House quickly struck back, saying the presdient would veto those measures.

"These piecemeal efforts are not serious, and they are no way to run a government," White House spokeswoman Amy Brundage said in a statement to Reuters. "The President and the Senate have been clear that they won't accept this kind of game-playing, and if these bills were to come to the President's desk, he would veto them."

"The Defense Department says it has temporarily suspended all sports competitions at the service academies as a result of the partial government shutdown.

"The decision jeopardizes this weekend's football games — Air Force at Navy and Army at Boston College."

Speaking in the White House Rose Garden on Tuesday, President Obama accused the right-wing of the Republican party of demanding the Affordable Care Act as "ransom" in exchange for funding the government.

"They've shut down the government over an ideological crusade to deny healthcare to millions of Americans," he said, calling on Congress to re-open the government.

Echoing much of what he has said already in recent days, the president vowed: "I will not give in to reckless demands."