Accessibility links
Legal Advocates Want Overhaul Of Public Defender System : The Two-Way Former Vice President Walter Mondale and a former Alabama Supreme Court justice are among those pressing for a bipartisan commission to improve legal services to the poor. 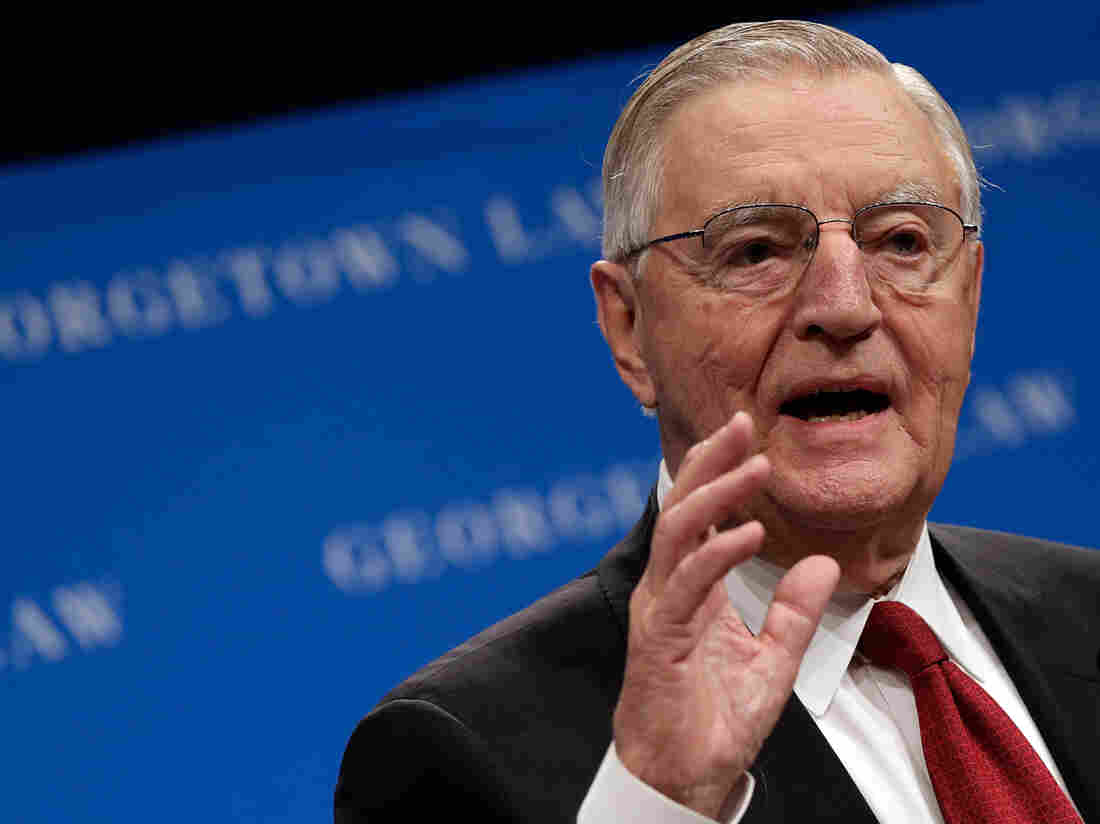 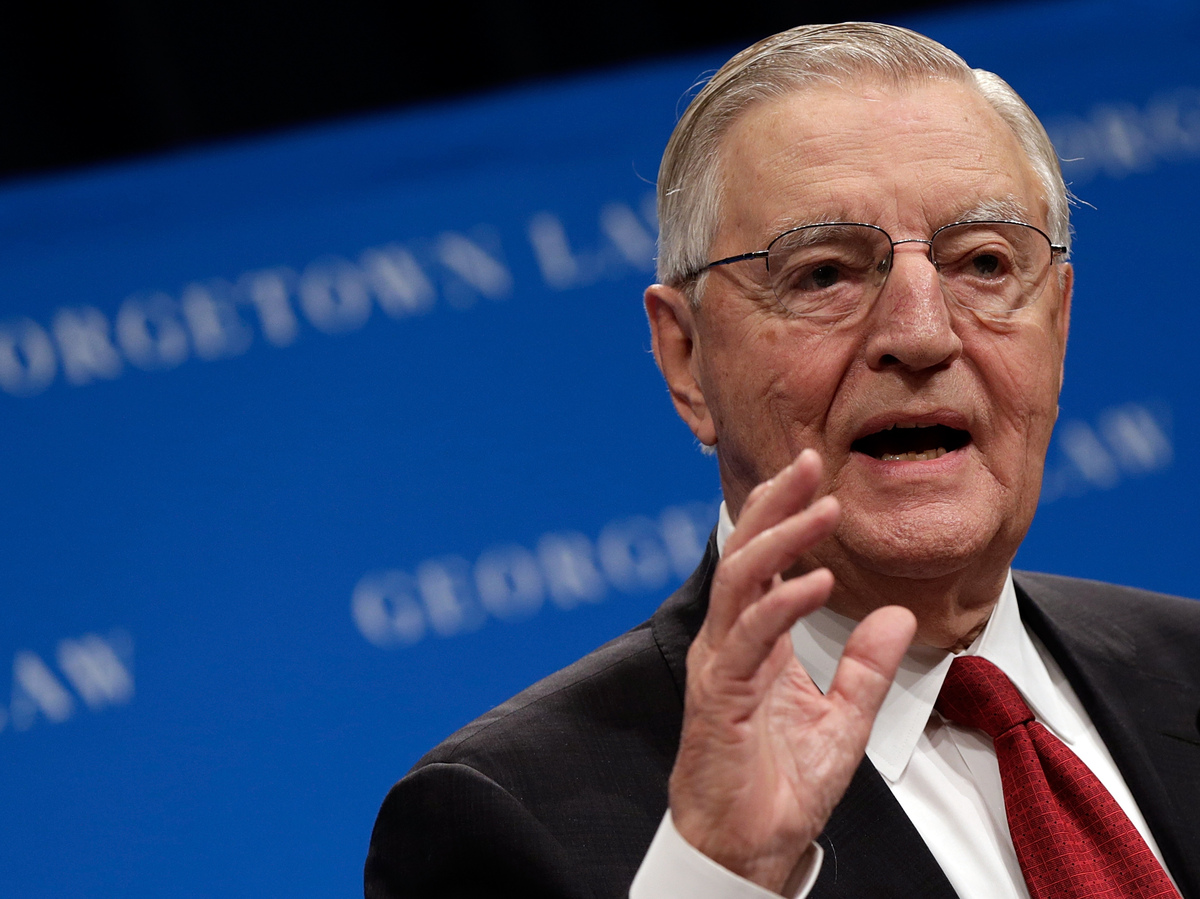 Former Vice President Walter Mondale speaks at a Georgetown University Law Center discussion last week. He is one of several prominent individuals calling for better legal representation for the poor.

Prominent members of the legal community are pressuring the Obama administration to do more to ensure that poor criminal defendants have access to a lawyer, a situation that Attorney General Eric Holder has already likened to a national crisis.

Calls to create a bipartisan White House commission began earlier this year, with the 50th anniversary of the landmark Supreme Court case Gideon v. Wainwright that first insured a public defender for persons accused of non-capital offenses. This week, advocates traveled to Washington to meet with Associate Attorney General Tony West to push the idea of the commission beyond the talking stage, NPR has learned.

"The right to counsel is a precious right that goes to the core of who we are as a people," the letter said.

They said work needs to be done in the areas of reducing the use of cash bail, which can be unaffordable for the poor, appointing a lawyer earlier in the criminal process, ensuring defenders are truly independent from judges who appoint them, getting rid of some low level and non-violent cases through treatment and other programs, counseling defendants on the impact of waiving their rights and studying the fiscal and psychological costs of over-incarceration. They want the Obama administration to establish a National Commission on the Fair Administration of Justice for the Indigent Accused.

David Carroll, executive director of the Sixth Amendment Foundation, describes the scope of the problem this way. "The most prevalent form of right to counsel services in America is for an attorney to handle an unlimited number of cases for a single flat fee under contract to a judge or county manager. This model produces a financial conflict of interest in which the less amount of resources or effort the attorney puts into the case, the more he puts in his own pocket. And, judges often appoint only those attorneys who contribute to their political reelection campaigns. Over 64% of counties (1,900 of 3,033) in the U.S. operate under this model."

Attorney General Eric Holder has given a series of speeches on reorienting the Justice Department away from non-violent drug offenders, making use of compassionate release programs for sick and elderly inmates, and other steps to reduce the nation's overcrowded prisons. But advocates say one issue that cuts across all those problems is the lack of defense attorneys for people facing criminal charges.

States already have been moving to try to address that concern. Texas overhauled its system for defending the poor more than 10 years ago. Earlier this summer, Michigan's Republican Gov. Rick Snyder signed bipartisan legislation in that state to create an indigent defense commission, an idea pushed by Tea Party state lawmakers and the Texas branch of the American Civil Liberties Union.

And public defenders in 47 out of 50 states have been writing Holder all summer to urge the Justice Department to take a broader role. For instance, Carlos Martinez, a public defender in Miami, wrote "for hundreds of thousands of Florida residents, the right to counsel is a hollow right."

Martinez said many misdemeanor defendants get no legal assistance at all, and in other cases, defendants run through an "assembly line" guilty plea mill with little of the "adversarial testing of the evidence" that undergirds the American justice system.

It's a familiar as far away as South Dakota.

"The fact that we do not have a statewide public defender system leaves us with no support when it comes to advocating for equal funding," wrote Traci Smith, the chief public defender in Minnehaha County, South Dakota. "Due to excessive caseloads and staffing shortages, it has become incredibly difficult to keep qualified attorneys on staff. ... Unfortunately whenever there is a shortfall, the Public Defender education and training is always the first line item that gets cut."

In Missouri, whose indigent defense system has long been cited for its triage-level workloads, Cat Kelly of the state public defender's office and Chief Justice Richard Teitelman of the Missouri Supreme Court wrote this plea: "As a nation, we daily pledge our allegiance to 'liberty and justice for all' while collectively closing our eyes to the horrific gap between that ideal and the reality of our justice system."

Earlier this year, in what officials at the National Association of Criminal Defense Lawyers called a milestone, the Justice Department weighed in to affirm a federal interest in the smooth and fair operations of public defender functions in two towns near Seattle.

The issue is drawing attention on Capitol Hill, too. Florida Democratic Rep. Ted Deutch is preparing to introduce legislation that would create a permanent, national center for the right to counsel, a nonprofit group that would provide financial support and training for public defense systems. The idea is modeled on the Legal Services Corporation, which helps provide legal aid in civil cases, according to a draft summary of the bill obtained by NPR.

Not everyone who works on public defense for the poor thinks spending time and money to study the problem is a good idea. A group of lawyers and activists told the Justice Department earlier this week there's virtually no debate on the key point: that more money and training need to be provided to public defenders nationwide.

"We believe it is time to stop studying these problems and to do something about them," wrote a group that includes Stephen Bright of the Southern Center for Human Rights, David Bruck of the Washington and Lee University School of Law, Sherrilyn Ifill of the NAACP Legal Defense & Educational Fund and Virginia Sloan of the Constitution Project.

"Whatever resources the federal government is willing to commit to the right to counsel for poor people accused of crimes should be immediately spent funding people and programs working in states and communities where there is the greatest need to make Gideon a reality," they added.