Accessibility links
Storm Brings Blizzard To Wyoming And South Dakota : The Two-Way Heavy snowfall and low visibility have combined to cause crashes and shut down roads. As of Saturday morning, blizzard conditions were still being reported near Badlands National Park. 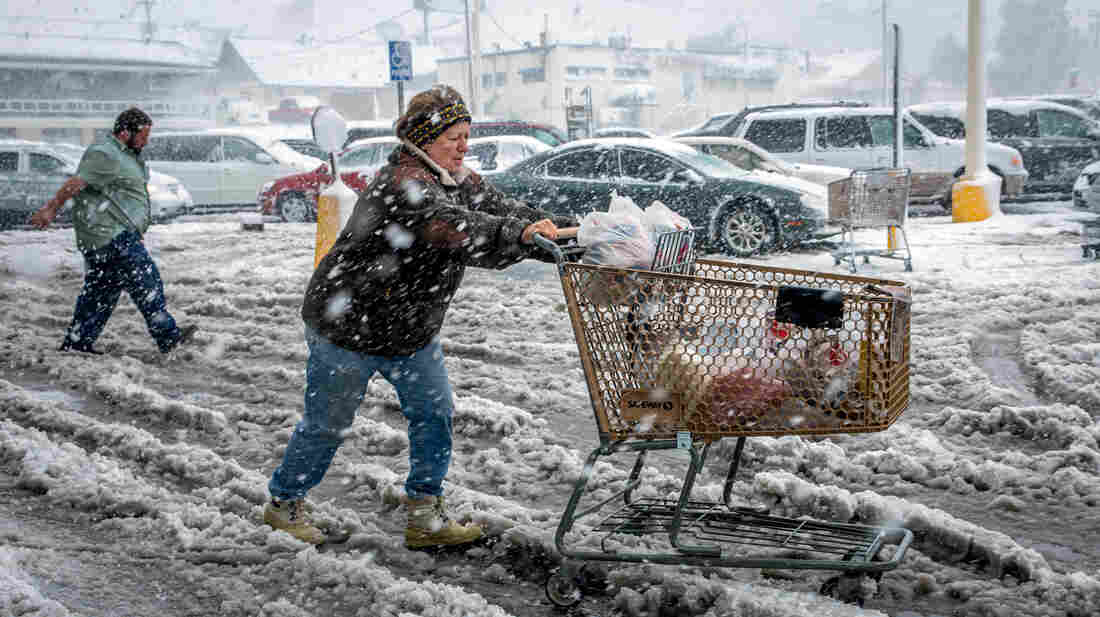 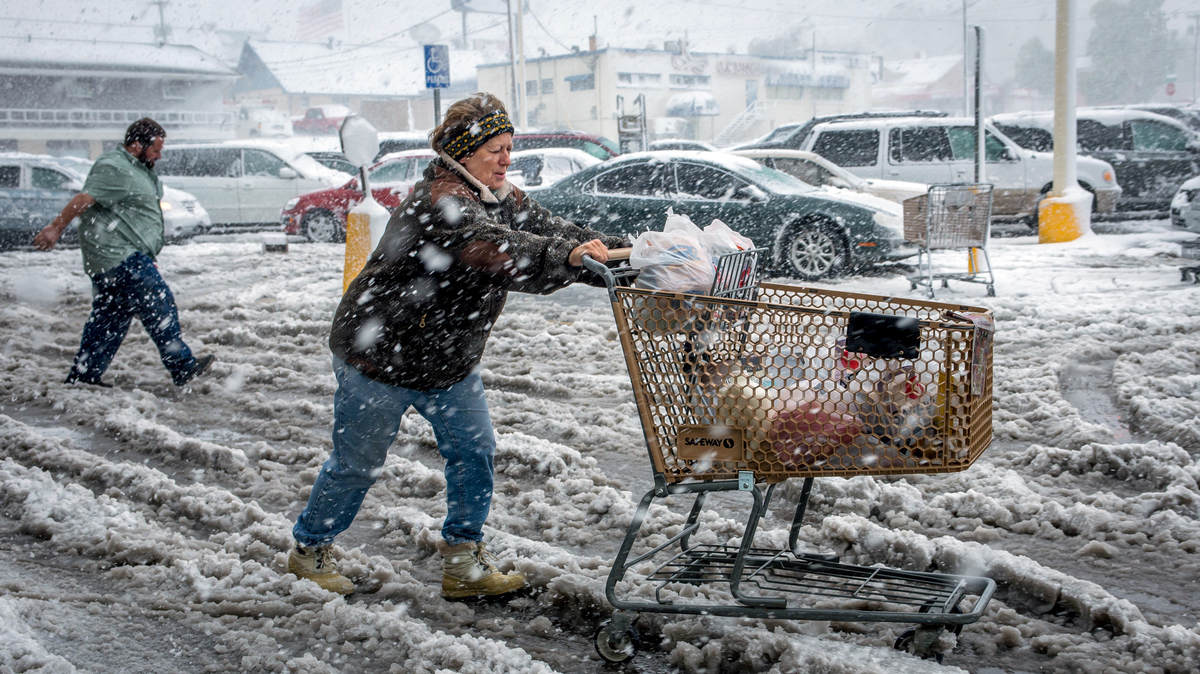 As snow fell in Rapid City, S.D., Friday Brenda Nolting took groceries to her car. An early snow storm swept through Wyoming and western South Dakota, dropping more than two fee of snow in some areas.

More than two feet of snow has crippled roadways in western South Dakota, the worst-hit target of a storm that brought snow to Wyoming and tornadoes to Nebraska Friday. Heavy snowfall and low visibility have combined to cause crashes and shut down roads.

When the storm began to hit, nearly 9,000 people reported losing power, the newspaper reports. Many of those have since had electricity restored, but thousands still lack power.

"Officials are calling for local volunteers with snowmobiles to help rescue about 80 stranded motorists who have been trapped in their cars overnight," South Dakota Public Broadcasting's Charles Michael Ray reports for NPR's Newscast.

"We weren't even aware of everybody who was out there, because they hadn't let us know, because they were doing OK," says Alexa White of Pennington County Emergency Management, in the Newscast report. "You know, they had a little bit of gas and they had their cellphone. And so they were just kind of waiting it out. We're just trying to get all those folks."

"Roads closures are widespread," Charles Michael Ray says. "Some rural residents may be without power or communication for several more days."

Some areas in the Black Hills reported more than four feet of snow with drifts over 15 feet high Saturday, according to our Newscast unit.

Many of the area's highways and the interstate were closed early Friday, and state troopers performed sweeps of the roads to make sure people weren't stranded. The conditions caused severe problems for motorists in Wyoming and South Dakota.

"Troopers have been going from one crash to the next," Wyoming State Patrol Sgt. Stephen Townsend says. "As soon as we get the road cleared and get it open, it seems like it's open for a very short time, and then we get a tangle of cars and a pileup, which closes the highway once again."

Ahead of the snowfall, the system brought thunderstorms and sparked tornadoes.

"Wayne, Neb., saw some of the greatest damage from tornadoes where at least four homes were destroyed in the town of 9,600," the AP reports.

As of Saturday morning, blizzard conditions were still being reported near Badlands National Park. That's according to the National Weather Service's office in Rapid City, S.D., where officials say 19 inches of snow fell east of the city Friday — a new record.

The weather service, which is operating despite a federal shutdown that has closed other agencies, reports a risk of severe thunderstorms Saturday as the storm system continues to move eastward, affecting a swath of the U.S. from Wisconsin down to northern Arkansas.