Accessibility links
Some States Allowed To Reopen National Parks — And Foot The Bill : The Two-Way The Grand Canyon and the Statue of Liberty will reopen after Arizona and New York struck deals to foot the bill. Utah's Republican governor, Gary Herbert, wasted no time in wiring $1.67 million to Washington overnight so that some of the park areas in his state can open as early as today.

Some States Allowed To Reopen National Parks — And Foot The Bill

Some States Allowed To Reopen National Parks — And Foot The Bill 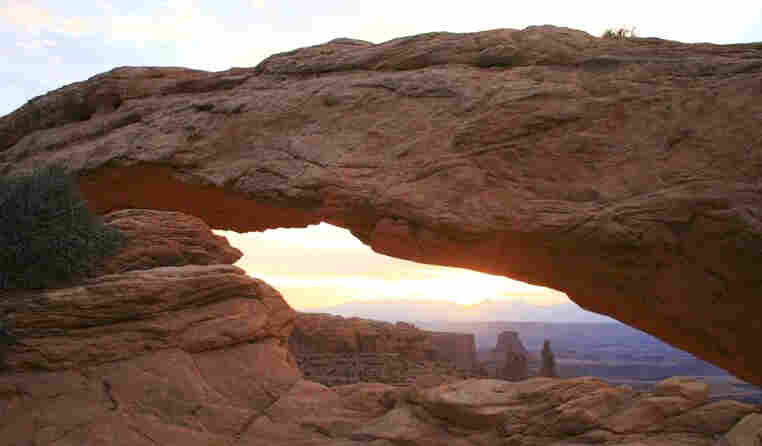 Dawn at Mesa Arch in Canyonlands National Park is a favorite moment for photographers from all over the world. They'll soon be able to return to the park, given Utah's deal with the Interior Department to fund park operations. Courtesy of Wanda Gayle hide caption 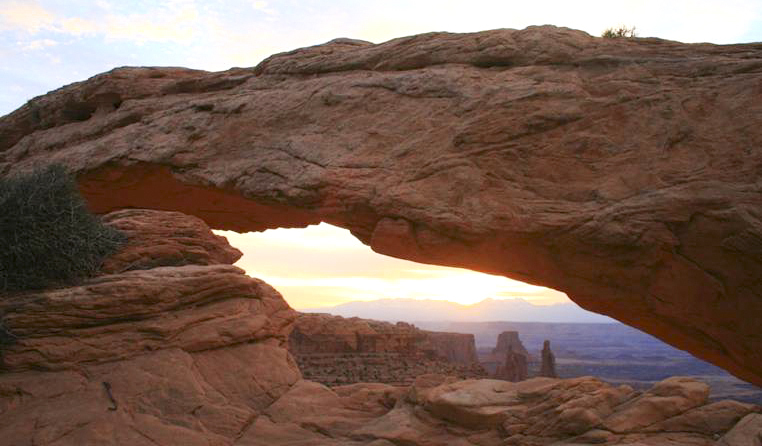 Dawn at Mesa Arch in Canyonlands National Park is a favorite moment for photographers from all over the world. They'll soon be able to return to the park, given Utah's deal with the Interior Department to fund park operations.

"This is a godsend!" exclaimed Utah Gov. Gary Herbert late Thursday night, as he signed an agreement with the Department of the Interior to use state funds to reopen eight national park areas in his state for at least 10 days.

The Republican governor wasted no time in wiring $1.67 million to Washington overnight so that some of the areas can open as early as today. Rangers and other National Park Service employees will staff the parks as usual.

"Utah's national parks are the backbone of many rural economies, and hardworking Utahns are paying a heavy price for this shutdown," Herbert said.

State officials say Utah tourism generates $100 million in revenue in October, which is a busy period, given foreign visitors, the Columbus Day holiday weekend and fall break next week for many public schools and universities.

"The key is you can't make up what you lose in October," Herbert said Friday morning on Salt Lake City television station KUTV.

The deal comes as officials in San Juan County were poised to dismantle barricades and take control of Canyonlands National Park; the Natural Bridges, Rainbow Bridge and Hovenweep national monuments; and Hite Marina in the Glen Canyon National Recreation Area.

The Salt Lake Tribune was reporting Friday afternoon that barricades had come down at Zion National Park. (The Utah Office of Tourism has devoted this Web page to news of which national park areas will open when.)

"The world should know Utah is open for business," Herbert declared.

Zion alone lost more than 72,000 visitors during the first 10 days of the partial government shutdown, according to the Coalition of National Park Service Retirees. Communities dependent on Zion tourism lost an estimated $3.5 million in visitor spending and more than 2,000 nongovernment jobs were at risk, the group said in a report issued Thursday.

Utah considers the money authorized Thursday a loan, but it requires an act of Congress for the U.S. government to pay the money back. Herbert is working with the state's predominately Republican congressional delegation to get a measure passed.

Utah is immediately tapping its own state parks funds, but the Legislature will consider reimbursing the Division of State Parks. Utah finished fiscal year 2013 with a $242 million budget surplus.

Utah is a solidly Republican state with no elected Democrats statewide and a single conservative Democrat, Rep. Jim Matheson, in the congressional delegation. Matheson voted recently with the Republican majority in the House to strip funding for the Affordable Care Act.

Utah Republican Sen. Mike Lee, a successful Tea Party candidate in 2010, has been one of the leaders of the drive to derail President Obama's health insurance law as part of funding the federal government.

Herbert told KUTV that "there's blame to go around on both sides."

San Juan County Commissioner Phil Lyman, who was eager to take control of park areas, told the Tribune, "I'm thrilled to get these parks back open."

Lyman had already traveled to Halls Crossing in Glen Canyon National Recreation Area to prepare to remove barricades. "We felt compelled to acquiesce to the governor's request to stand down," he told the Tribune.

Utah's battle to reopen the parks appears ironic to some, given strong resistance in the state to the establishment of national park areas and other federal reserves, and state legislation that challenges federal management of public lands.

"Utah resisted the creation of several of the national parks that now blanket southern Utah because it resented the federal control over land within the state," says John Copeland Nagle, a professor of law at Notre Dame University and the author of a forthcoming book on national parks.

"But now ... the towns of southern Utah have come to depend on the tourist revenue that the national parks generate," he says.

Utah's parks deal has received mixed reviews in Congress. Rep. Doc Hastings, R-Wash., chairman of the House Natural Resources Committee, is holding a congressional hearing next week on the administration's decision to close national parks during the partial shutdown.

"While I'm pleased to see the Obama administration partially cave to public pressure and reverse course," Hastings says, "at the end of the day, states shouldn't have to pay to keep these parks open."

Joan Anzelmo, who served more than three decades with the National Park Service, says there have been grave concerns for the safety of park employees, especially given the threats to storm park barricades and take over parks.

"Safety of NPS employees on duty has been the highest priority as the potential for real violence seems lurking around every corner," says Anzelmo, who now represents the Coalition of National Park Service Retirees. "We are sympathetic to the extremely difficult position the NPS has been placed in. We continue to urge Congress to pass a budget and open the federal government including all of America's national parks."

Arizona and New York have reached deals with the Department of the Interior to reopen the Grand Canyon and The Statue of Liberty, respectively.

Colorado signed an agreement with the Interior Department Friday that sends $362,700 to Washington so that Rocky Mountain National Park can re-open. An Interior Department news release says other states are negotiating similar agreements but doesn't name those states. South Dakota officials have said they wanted to partially re-open Mt. Rushmore with state funds but the National Park Service has said that only full operations would be considered. Arizona has also looked at some kind of deal to open Grand Canyon National Park.

Members of Congress from districts with national parks quickly introduced legislation to reimburse states that fund national park operations during the government shutdown.

"My legislation will protect states and ensure they receive full compensation for their work to reopen our National Park gates," said Congressman Steve Daines (R-MT), who introduced a measure that would require repayments within 90 days.

Update at 2:29 p.m. ET. Interior Will Consider Other States:

The Interior Department says it will consider agreements with the governors of other states. Arizona, South Dakota and Colorado have expressed interest in similar arrangements.

"This is a practical and temporary solution that will lessen the pain for some businesses and communities in Utah during this shutdown," said Interior Secretary Sally Jewell.

An agency statement refers to Utah's funding as a donation. Utah Gov. Herbert considers the funding a loan and has the state's congressional delegation working on legislation to reimburse the state.