Accessibility links
In Ariz., A Solar Plant That Powers 70,000 Homes Day Or Night : The Two-Way The array includes 3,200 mirrors that heat a special oil that boils water, which drives turbines. The setup is one of the largest solar power plants of its kind in the world. 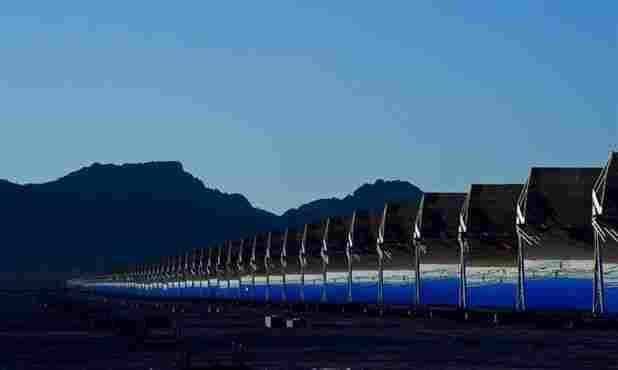 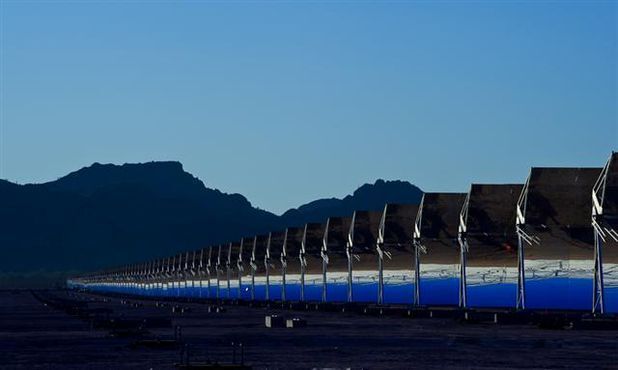 Outside Phoenix, Ariz., on Wednesday, a power company turned on one of the largest solar power plants of its kind in the world. But unlike other solar farms, this plant continues giving power to 70,000 Arizona households long after the sunset.

The Solana plant uses 3,200 mirrors that are tilted so they focus the sun's rays to heat a specially-designed oil. That boils water, which drives turbines and generates electricity. Or, the oil can heat giant tanks of salt, which soak up the energy. When the sun goes down, or when households need more power, the hot salt tanks heat up the oil, which again boils water to drive the turbines.

Whereas conventional solar panels only give power when the sun is up, these giant salt batteries give renewable energy on demand. They can store six hours-worth of energy, which can meet the demands of Arizona customers, according to months of test data.

"That's the sort of thing you can do with a conventional gas plant that no one had envisioned doing with renewables," says Patrick Dinkel, vice president of resource management for Arizona Public Service, which is Arizona's largest utility company.

The company has already bought the power from this plant for the next 30 years, to add to the state's goal of generating 15 percent of its energy from renewable sources by 2025. The plant does mean higher energy bills for APS customers — an extra $1.28 per month for the first five years, $1.09 per month for the next five, and then 94 cents per month after that, according to the company. Dinkel says the state won't see a lot more of these plants soon because that would cost too much.

"Right now natural gas wins that race (for cheap power,)" Dinkel says. "The challenge is no one knows what those economics look like in five years."

The U.S. Department of Energy lent Abengoa Solar, the Spanish company that built that plant as well as Europe's first solar thermal power plant, $1.4 billion, out of the $2 billion price tag. It's the same program that financed Solyndra, a solar panel firm that went bankrupt in 2011. But this is a different kind of investment, says Armando Zuluaga, general manager of Abengoa Solar. He points out the company already has a public utility buying their output for the next 30 years, so the government will get its money back with interest.

"There's no market risk here," Zuluaga says. "It's just about getting the plant built."

This won't be the last we hear of Abengoa Solar and this technology. The company is building a similar, though smaller plant in the Mojave desert in California, which will come online next year, as well as plants in South Africa.

(Alan Yu is a Kroc Fellow at NPR.)