Accessibility links
18-Foot Oarfish Livens Up A 'Leisurely Snorkel' In California : The Two-Way A snorkeler off Catalina Island encountered a rare creature Sunday, when she saw the large eyes of an 18-foot fish staring back at her. It turned out to be a rare oarfish, known to live in waters thousands of feet deep.

18-Foot Oarfish Livens Up A 'Leisurely Snorkel' In California

18-Foot Oarfish Livens Up A 'Leisurely Snorkel' In California 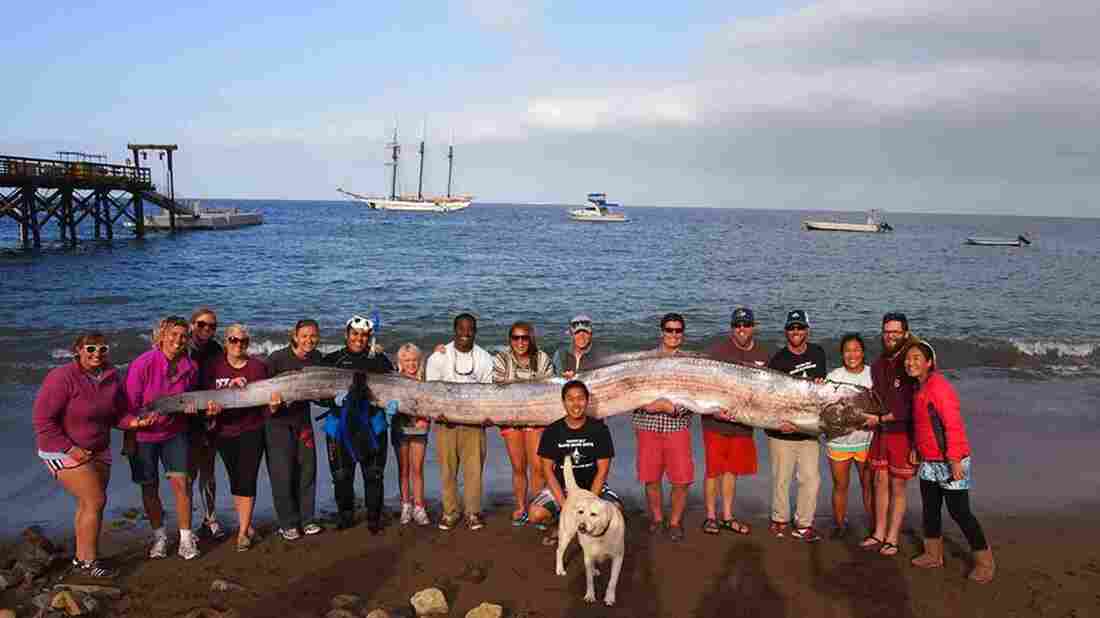 People hoist the body of an 18-foot oarfish that was discovered in Toyon Bay at Catalina Island off the California coast. Courtesty of Catalina Island Marine Institute hide caption 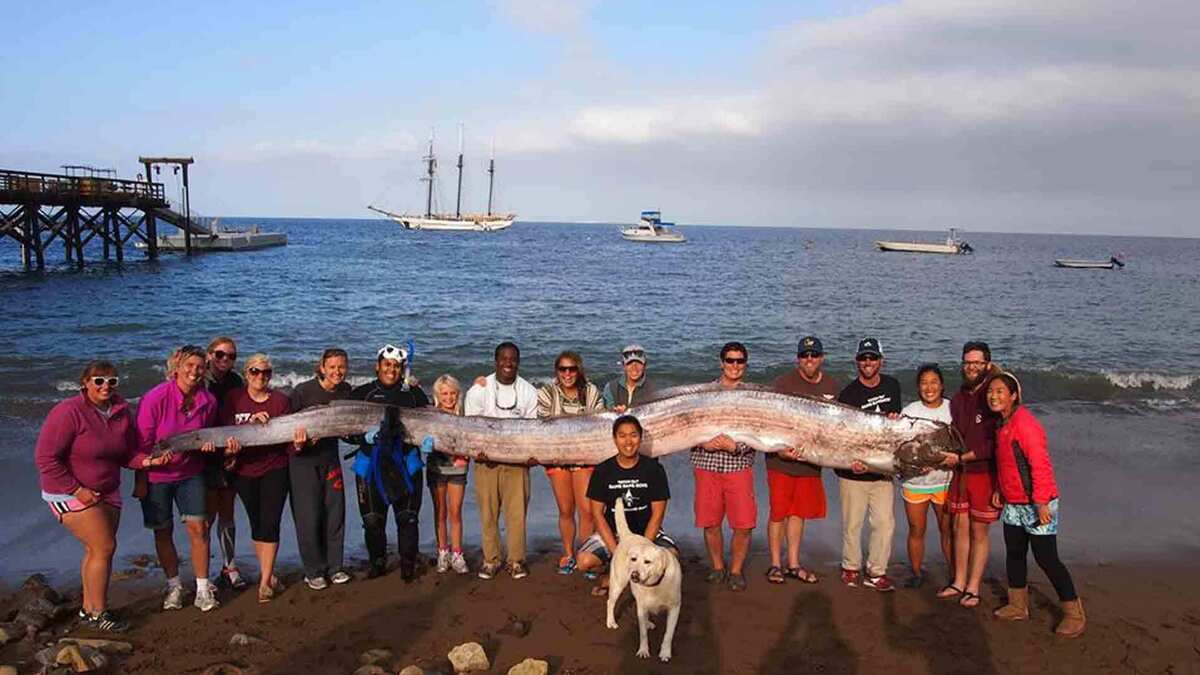 People hoist the body of an 18-foot oarfish that was discovered in Toyon Bay at Catalina Island off the California coast.

A snorkeler off the coast of California found more than she bargained for on the ocean floor Sunday, when she saw the large eyes of an 18-foot fish staring back at her. It turned out to be a dead oarfish, a mysterious creature known to live in waters thousands of feet deep.

The discovery at the bottom of Toyon Bay at Catalina Island came as a shock to Jasmine Santana, an instructor at the Catalina Island Marine Institute, who approached the ribbon-like animal with care before realizing it was dead. Its body was "almost perfectly intact," the institute says. It may have died of natural causes.

As Santana tried to pull the sea creature through the shallows and up to a beach, other instructors spotted her and pitched in. It took at least 15 of them to hoist the oarfish, which brought a surprise ending to what had been a "leisurely" afternoon snorkel.

The institute, which runs a camp and activities for children, has contacted ocean wildlife experts about the find. The oarfish is the longest bony fish in the world; one specimen was reported as being 36 feet in length, according to the Florida Museum of Natural History.

The animal is also called a ribbon fish, or sometimes merely the king of herrings. In 2011, a large oarfish was filmed swimming in the Gulf of Mexico, in striking images that show its single dorsal fin rippling along the length of its body.

"It is believed that oarfish dive over 3,000 feet deep, which leaves them largely unstudied," the Catalina Institute says, "and little is known about their behavior or population. They are likely responsible for sea serpent legends throughout history."

The oarfish graced the pages of NPR.org this summer, when The Two-Way noted the discovery of a "mysterious sea monster" that had washed ashore.

Update at 5:30 p.m. ET: More On The Catalina Institute

The folks at the non-profit Catalina Island Marine Institute have sent us a bit more information about themselves, which we're including here for anyone who might wonder what all those instructors were doing on the island, or who they might be instructing:

"Our parent organization Guided Discoveries has been in operation since 1979 and in that time we have introduced over 1,000,000 students and their teachers to the sciences in a unique and hands on way. Schools come to us from as far away as Nashville, and during our summer camps we have campers attend from all around the world."