Accessibility links
Netflix On The Moon? Broadband Makes It To Deep Space : The Two-Way A NASA mission to the moon has completed the first high-bandwidth space-to-ground communication using a laser. This is a big upgrade from the radio systems now in use and could potentially revolutionize deep-space communication. 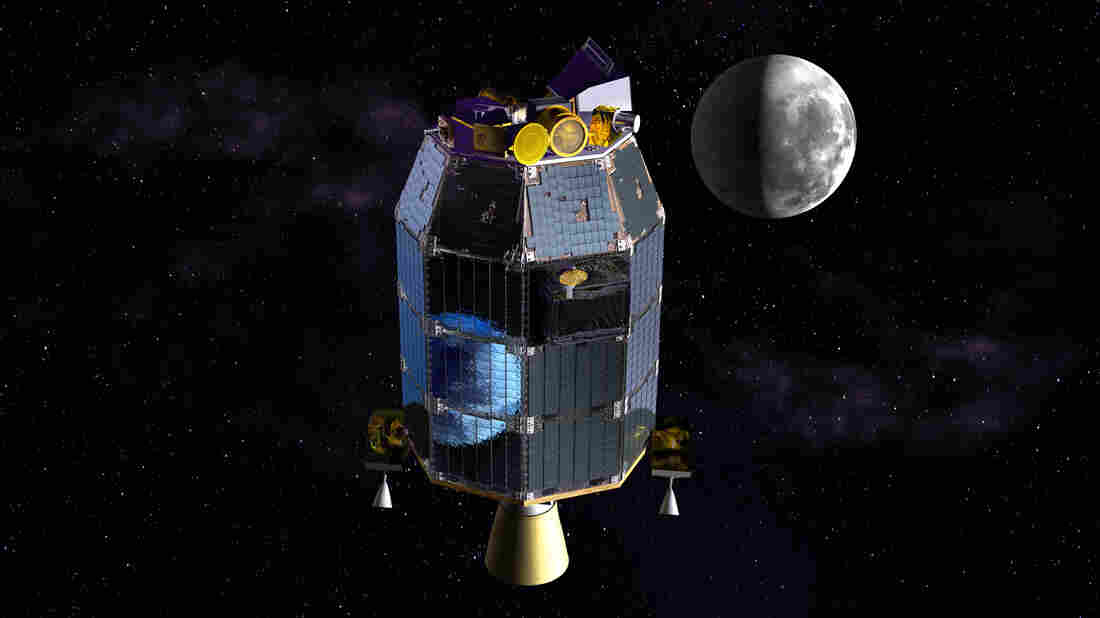 Here's a funny quirk of the modern age: It takes just seconds to pull up a bad sci-fi movie about invaders from the moon and watch it in HD. But actual communications between the Earth and moon are just as static-filled as they were back in the 1960s.

Until now. NASA says it's just gotten a lunar broadband connection up and running. The new connection is just a test, but it could allow scientists to collect more data from spacecraft and rovers. It could also allow astronauts to maintain good communications as they travel farther from Earth.

Communication in deep space hasn't changed a lot since NASA launched its earliest probes in the late 1950s. Everyone still uses giant radio dishes to talk to rovers on Mars or spacecraft orbiting Mercury. Radio is dependable, but here on Earth, we've moved on. Aside from NPR on your car radio, you probably get most of your news via broadband. And broadband sends data in pulses of laser light.

Lasers are fast and can send huge amounts of data a long way. But doing it from space presents a problem: Ever tried to steady a laser pointer during a presentation?

That's just what Cornwell and his colleagues from the Massachusetts Institute of Technology's Lincoln Laboratory have done. They put a laser transmitter built at MIT aboard a probe called the Lunar and Atmospheric Dust Environment Explorer, which is currently orbiting the moon. Using some very precisely aimed telescopes on Earth, they've been able to send and receive data at broadband speeds.

"We're currently demonstrating 622 megabits per second of data transmission, from the moon down to the Earth," Cromwell says. That's already six times faster than the fastest radio communications, and the laser system could eventually be much faster still.

It's not perfect. For example, it won't work if it's cloudy on Earth. For that reason, Cromwell's team has built multiple ground stations in California, New Mexico and on the island of Tenerife in Spain. And the laser would have to be boosted in power to work over longer distances, like between the Earth and Mars.

But if it can be built, it will be a huge help to astronauts on deep-space missions. For example, a laser system could transmit HD video of equipment in need of fixing to engineers back on Earth, Cornwell says. Astronauts could also get their fill of really bad sci-fi.

Those missions are further off, but the unmanned probes of today would also benefit, says John Grotzinger, project scientist for the Curiosity Rover now exploring Mars. Like everyone else, Curiosity uses standard radio communications, and Grotzinger says it's holding the team back: "With this additional [laser] capability we would be less limited in terms of how much data we could both acquire and downlink to Earth," he told NPR in an e-mail. "That would be a really nice improvement."