Accessibility links
Two Blond Children Taken From Roma Families In Ireland Are Returned : The Two-Way On two occasions in the past week, children in Ireland were taken from Roma families because they did not look like them. Turns out, police were wrong both times. 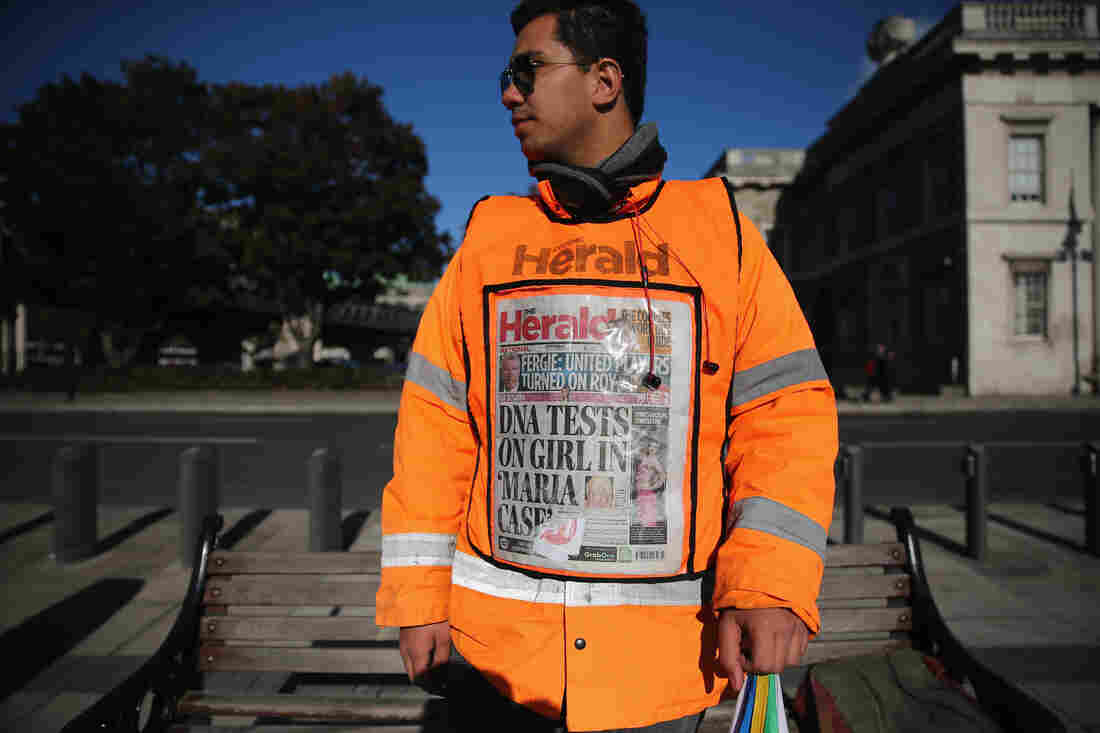 A newspaper vendor wears a vest displaying front page of The Herald on Wednesday in Dublin. Irish authorities were waiting for DNA test results in relation to a girl removed by Gardai from a Roma family in Dublin, days after a similar case in Greece. The test showed the girl was the biological daughter of the Roma family. Dan Kitwood/Getty Images hide caption

A newspaper vendor wears a vest displaying front page of The Herald on Wednesday in Dublin. Irish authorities were waiting for DNA test results in relation to a girl removed by Gardai from a Roma family in Dublin, days after a similar case in Greece. The test showed the girl was the biological daughter of the Roma family.

Over the past week, two children were taken from Roma families in Ireland. Authorities said they suspected the blond-haired and blue-eyed children might had been abducted because they did not look like their parents.

Today, we get news that after a DNA test and other proof was presented to authorities, the boy and the girl are back with their biological parents.

Meanwhile, the Justice Minister Alan Shatter called for a report about how this happened.

"We must all be particularly conscious of the regrettable distress that arose for the two families and their children," Shatter said, according to the Irish Times. "Quite clearly no fault of any nature attaches to the two families concerned for the events which took place."

Ireland's Independent reports that the girl's family's lawyer told reporters that they were "absolutely delighted" to have their child back.

"Our clients would like those who hear this statement, and particularly those who are parents themselves, to consider how they would feel if one of their children was taken away in similar circumstances for similar reasons," Waheed Mudah said. "They hope that no other family has to go through the experience that they have just suffered."

Of course, this comes after a highly publicized case in Greece, in which a Roma couple was charged with abducting a blond girl. The media pounced on the story, making it of international importance. The two adults, Christos Salis, 39, and his wife, Eleftheria Dimopoulou, 41, said they adopted the girl from a Roma woman in Bulgaria.

As Britain's Independent reports, the case surfaced old attitudes about the nomadic people. Romas in the camp where the Greek girl lived told the paper that on TV, they are called Romas, but on the street, they are called Gypsies, as people spit and walk away.

Human Rights groups in Europe have said that the case in Greece could be used by racists to exploit the Romas. The Guardian reports:

"Dezideriu Gergely told RTÉ's Morning Ireland programme: 'The concern related to these cases is that if these cases are not discussed from all angles possible, there's this, if I can say, trap to fall into, basically labelling the whole community for being responsible for something which needs to be looked at from an individual point of view and responsibility point of view.'

Aisling Twomey, a spokeswoman for the Dublin-based Roma and Irish Traveller rights group, said: 'This specific case could be used as a means to target the Roma community when the reality is that they are one of the most marginalised communities, not just in Ireland, but worldwide."

According to the BBC, Gergely went on to say something that should perhaps be obvious, but these two cases prove it isn't: Not all Romas have a dark complexion.