Accessibility links
Murder Charges Filed In Los Angeles Airport Shooting : The Two-Way A day after a shooting grounded hundreds of flights and more than 99,000 passengers, the airport was back to normal. Meanwhile, portraits of the alleged shooter and the slain TSA agent are emerging. 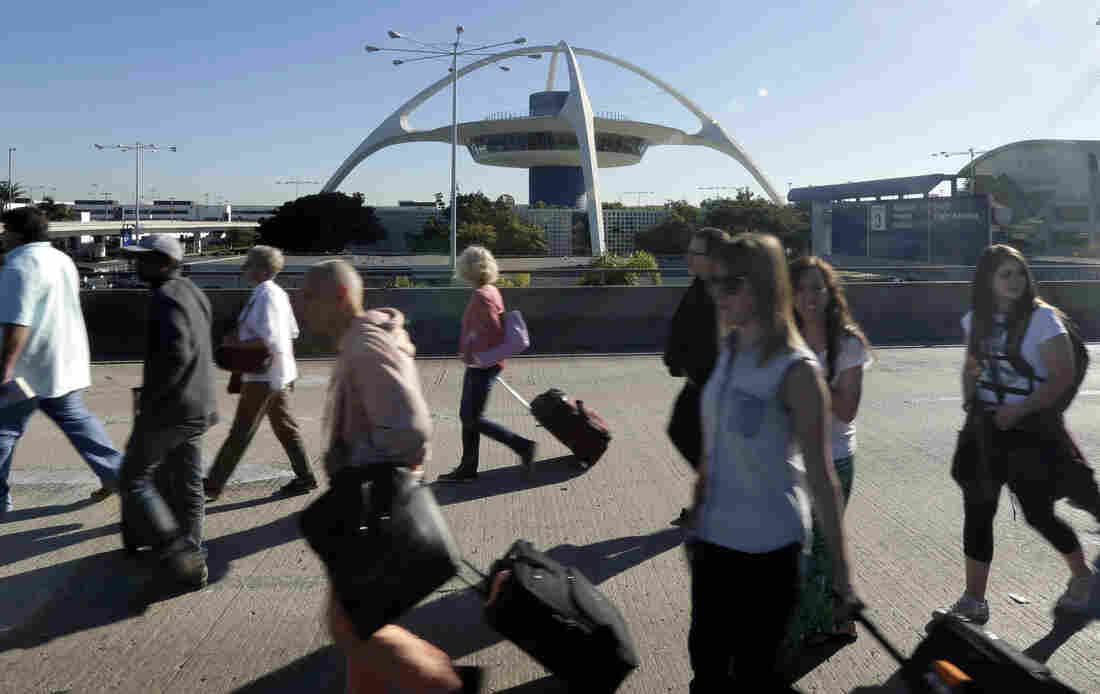 The suspect in the shooting of a TSA agent at Los Angeles International Airport has been charged with murder, U.S. Attorney Andre Birotte Jr. told reporters Saturday.

Paul Ciancia, 23, is charged with killing Gerardo Hernandez, who was shot to death Friday at the airport.

The Associated Press reports: "Ciancia was also charged with commission of violence at an international airport. He could face the death penalty."

A day after a shooting incident delayed hundreds of flights and left a TSA agent dead, Terminal 3 at Los Angeles International Airport is "fully open and operational," the Executive Director of Los Angeles World Airports Gina Marie Lindsey said during a press conference moments ago.

As the FBI combs through the crime scene at Los Angeles International Airport, where a gunman opened fire on Friday, killing a TSA agent and hurting others, Terminal 3 remains closed.

The airport tweeted that 826 scheduled flights and 99,200 passengers were affected by the incident. Flights scheduled to leave from Terminal 3 are leaving from other terminals.

Meanwhile, we are learning a little more about the gunman and his victims. Here's an overview:

-- Friends told The Los Angeles Times that Paul Anthony Ciancia, 23, was a quiet teenager who kept to himself.

"I really don't remember any one person who was close to him.... In four years, I never heard a word out of his mouth," David Hamilton, who graduated from a Delaware high school with Ciancia, told the paper.

The note, the paper reports, hinted at some kind of suicide mission.

-- The AP quotes Pennsville Township, N.J., Police Chief Allen Cummings as saying that Ciancia's father called police Friday because he was worried that his son intended to take his own life.

Ciancia's father, Cummings said, had received a text message that worried him.

-- Gerardo I. Hernandez, 39, is the first TSA agent to lose his life on the job.

"No words can explain the horror that we experienced today when a shooter took the life of a member of our family and injured two TSA officers at Los Angeles International Airport," TSA administrator John S. Pistole said in a statement.

NBC Los Angeles spoke to Kevin Maxwell, a friend of Hernandez. He said Hernandez always talked about his family:

"The victim was 'very proud' of his son and 'spoke profoundly' of his daughter, his friend and former colleague said.

"Maxwell said he worked with Hernandez in TSA's logistics department until last year, when Maxwell resigned from his position to care for his grandmother."

-- The New York Times reports two other people and at least four others were injured during the incident.

-- CNN reports that witness reports could give us a clue as to motive:

"Some said the gunmen asked people, 'Hey, are you TSA?' — the acronym for the Transportation Security Administration. If they said 'no,' he would move on.

"One of those questioned travelers was Leon Saryan. He told CNN's Anderson Cooper that the same man he'd just seen shoot a TSA officer 'calmly' walked toward him and asked, 'TSA?'

-- The New York Times spoke to Rich Garry, 68, of Fullerton, Calif., who said he had just cleared security when he heard two pops and saw a TSA agent on the floor.

"As the gunman moved through the terminal, Mr. Garry said, 'he was very calm. When he got to the top of the stairs where the security checkpoints are, he looked around. If he would have come up the ramp, he would have had a field day with all the people lying on the ground, like me.'

"Mr. Garry said he and several others crawled to a nearby elevator and went to the ground floor. Once there, he saw police officers for the first time, and told them to go to the second floor."