Accessibility links
'60 Minutes' Apologizes For Benghazi Report: 'We Were Wrong' : The Two-Way A man 60 Minutes said had been on the scene of the September 2012 attack in Benghazi, Libya, gave different accounts to his employer and to the FBI. He told them he had not been a witness to the attack. Now, the news show says it was wrong to put him on the air.

'60 Minutes' Apologizes For Benghazi Report: 'We Were Wrong'

'60 Minutes' Apologizes For Benghazi Report: 'We Were Wrong'

"The truth is that we made a mistake," CBS News correspondent Lara Logan said Friday as she apologized for an Oct. 27 report on 60 Minutes in which a State Department security contractor claimed he had been on the scene of the Sept. 11, 2012, attack at a U.S. mission in Benghazi, Libya.

That attack left the U.S. ambassador to Libya and three other Americans dead.

Logan's admission and apology came after stories from other news outlets that raised serious questions about 60 Minutes' report.

Dylan Davies, the security contractor at the center of the 60 Minutes broadcast, "gave the FBI an account of the night that terrorists attacked the mission on Sept. 11, 2012, that contradicts a version of events he provided in a recently published book" and on 60 Minutes, The New York Times wrote Thursday evening.

Instead of being present during the attack, Davies told the FBI "that he was not on the scene until the morning after the attack," the Times reported.

The Times' story followed word last week from The Washington Post that Davies (who wrote his book and appeared on 60 Minutes under the pseudonym Morgan Jones) told his employer that "he spent most of that night at his Benghazi beach-side villa." 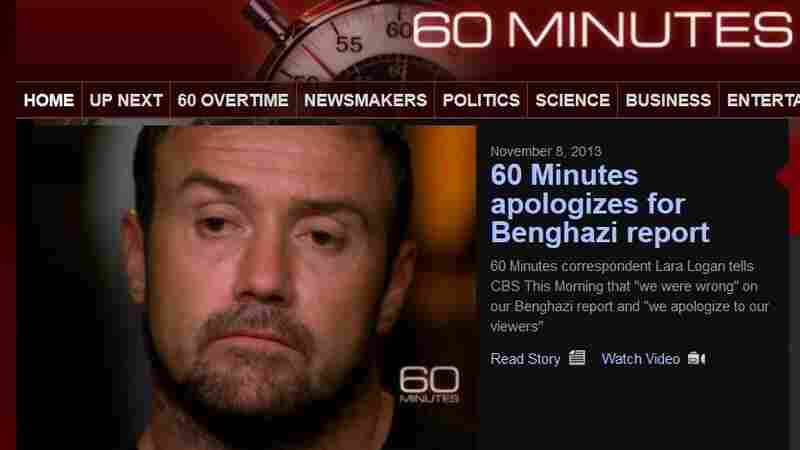 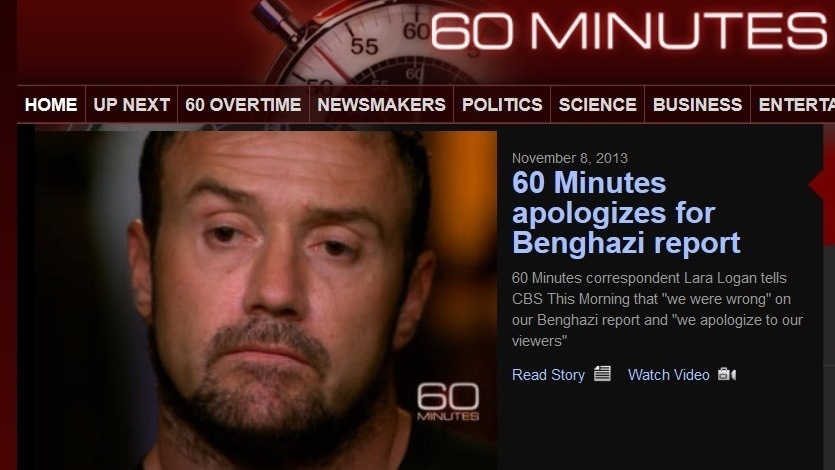 Although Davies tried to get to the scene, the Post said, he wrote that "we could not get anywhere near ... as roadblocks had been set up."

Davies told The Daily Beast last week that he didn't write that report to his employer and had never seen it. He did, though, say that he had told his supervisor that he had not gone to the scene of the attack. Davies claimed he "lied to [the supervisor] about his actions that night because he did not want his supervisor to know he had disobeyed his orders to stay at his villa."

After the Post's report, Logan and others at CBS defended their piece. But after Thursday night's story from the Times about what Davies reportedly told the FBI, Logan and her colleagues reversed course.

"We were wrong ... we made a mistake," Logan said Friday on CBS This Morning. The Times' story about what Davies told the FBI, she said, made 60 Minutes realize "we no longer had confidence in our source. ... We were wrong to put him on the air."

Logan added that CBS has tried to reach Davies for comment on the latest disclosures, but has not yet spoken with him.

There has also been criticism of 60 Minutes for not disclosing in its report that Davies' book is being published by a unit of Simon and Schuster — a part of the CBS media empire. Logan did not address that point.

Jennifer Robinson, a spokeswoman for the Simon and Schuster unit that is handling the book, tells the Times that "in light of these revelations we will review the book and take appropriate action with regard to its publication status."

As the Post wrote when it posted its story last week, the 60 Minutes report led to renewed partisan debate over the Benghazi attack:

"The man whom CBS called Morgan Jones, a pseudonym, described racing to the Benghazi compound while the attack was underway, scaling a 12-foot wall and downing an extremist with the butt end of a rifle as he tried in vain to rescue the besieged Americans.

"The 60 Minutes broadcast, in which Jones [Davies] also recounted his clandestine visit that night to a Benghazi hospital to view the body of slain U.S. Ambassador J. Christopher Stevens, helped propel a new round of partisan conflict ... over the attack.

"Sen. Lindsey O. Graham, S.C., and other Republican lawmakers referred to it repeatedly during a ... news conference. Graham said he would block confirmation of all of President Obama's nominees, including Jeh Johnson as homeland security secretary and Janet L. Yellen as head of the Federal Reserve, until the administration allowed government witnesses to the attack to appear before Congress."

CBS appears to have removed the 60 Minutes report from its website. We found at least one copy on YouTube. We suspect it may soon disappear as well.

NPR's David Folkenflik is planning to have more on the 60 Minutes report and apology on All Things Considered later today. Click here to find an NPR station that broadcasts or streams the show.