Accessibility links
'Holy Cow' And 'Kangaroo Court': House Panel Grills HealthCare.gov Officials : The Two-Way A House oversight hearing on the troubled HealthCare.gov site was contentious from the start Wednesday, as Rep. Darrell Issa, R-Calif., sought to cut short the opening remarks of one of the first officials to speak. One Democrat called it "a kangaroo court." 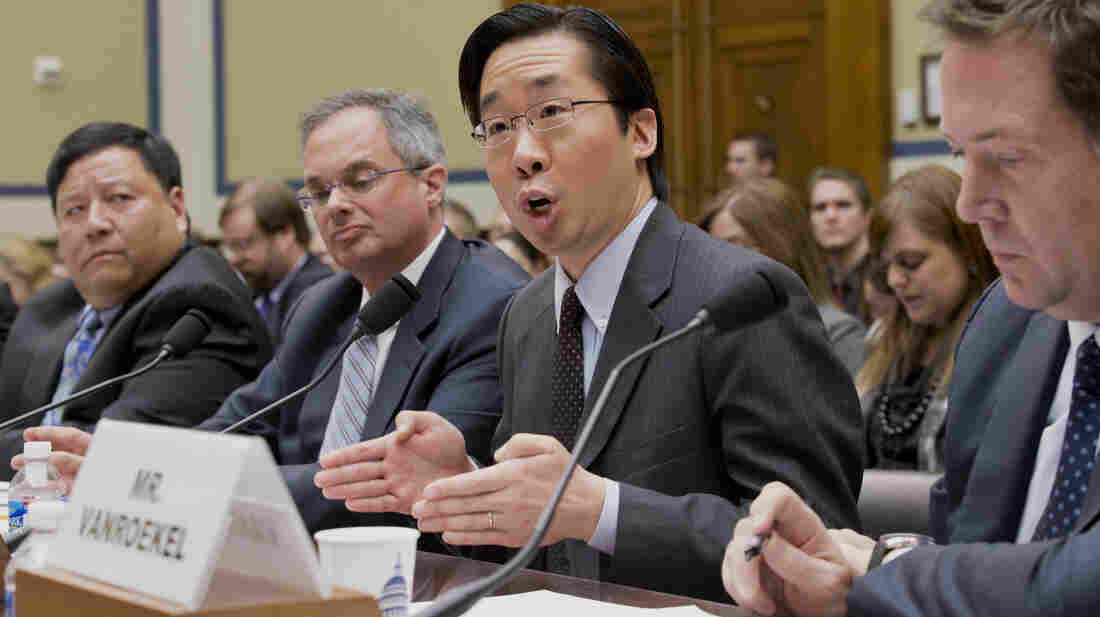 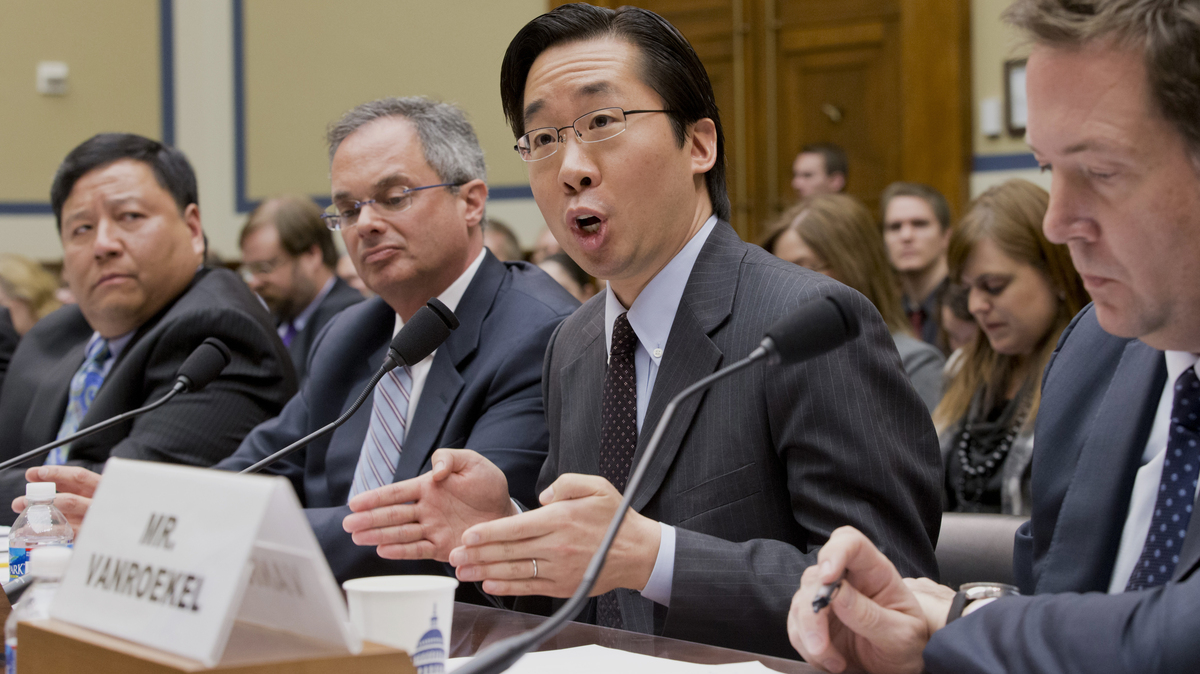 Todd Park, U.S. chief technology officer, answers questions in a House Oversight Committee hearing about problems with the federal HealthCare.gov site. One Democrat on the committee called the hearing "a kangaroo court."

A House oversight hearing examining the troubled start of HealthCare.gov was contentious from the start Wednesday, as Rep. Darrell Issa, R-Calif., sought to cut short the opening remarks of one of the first officials to speak, Frank Baitman, the deputy assistant secretary for Information Technology in the Department of Health and Human Services.

Issa, chairman of the House Oversight Committee, asked Baitman to conclude his statement, noting that the panel's time was short. The interruption came as Baitman discussed the work of his agency to save taxpayers money.

"Mr. Baitman, we know how great a job you're doing, that's why you're here today," he said. "Could you please wrap up?"

According to the text of the statement Baitman had provided to the panel, the chairman's request came in Baitman's final sentence before he was to conclude by thanking the committee.

Issa asked U.S. Chief Technology Officer Todd Park to state how many people were able to register online in early October, when the website that was meant to manage Americans' enrollment in the health care exchanges was launched.

Park didn't speak about that first day; instead, he said that as of today, "the system has been comfortably handling, at present, about 20-25,000 current users." Park also said that the site's load times had been greatly improved, with times reported at under one second.

Earlier this month, Issa released notes from HealthCare.gov meetings that showed only six enrollments had taken place on the system's first day, followed by 248 enrollments the next day.

This afternoon, Health and Human Services Secretary Kathleen Sebelius announced that more than 106,000 Americans had signed up for plans through the federal and state systems.

Here are other notable exchanges from the House hearing:

Rep. John Duncan, R-Tenn., quizzed the witnesses about the overall cost and expected deadline for the system to be fully operational. He also decried "sweetheart insider deals" that he said were making government contractors "filthy rich."

When Duncan asked the witnesses if they knew what the total cost of fixing the program might be, no one volunteered an answer.

Citing a figure provided earlier by David Powner of the Government Accountability Office, he asked, "If we've spent $600 million already and it's not working, does anybody have any idea how much all this is going to cost us in the end?"

When no one answered, he moved on to another question.

"How much longer is it going to take us? Another three and a half years to get this straightened out?" he asked.

That led Issa to note that in the private sector, companies know the costs and deadlines of a large project — and that companies such as Microsoft wouldn't have launched a product like HealthCare.gov.

"Even Windows Vista launched better than the Obama website," he said.

Connolly asked Henry Chao, deputy chief information officer at the Centers for Medicare and Medicaid Services, about that story, which relied upon a partial transcript of nine hours' worth of testimony Chao had earlier given behind closed doors.

The two agreed that the leaked document referred to earlier components of the system and that "there was in fact no possibility of identity theft" for people buying insurance after Oct. 1, Connolly said.

"I think there was some rearrangement of the words that I used during the testimony," Chao said.

After that discussion, Issa mentioned "significant security leaks" in the HealthCare.gov site that could allow hackers to steal users' information.

"I understand you're rehabilitating Mr. Chao," Issa said to Connolly.

"Mr. Chairman, let's be fair," Connolly said. "I'm trying to get the facts on the record and correct a deliberate smear against Mr. Chao, not to rehabilitate him... because someone deliberately leaked something and distorted it, in the name of this committee."

When Rep. Patrick McHenry, R-N.C., asked Chao if the system had been fully tested in the way other projects have been, Chao said he wasn't sure what the congressman meant by that.

"I'm trying to understand what you mean by fully tested," Chao said.

Chao then said the system had been tested according to federal controls and standards.

McHenry then asked Chao why his boss had resigned.

"He didn't resign," Chao said." I think he decided to make a career change.

"It looks like he picked a fantastic time to high-tail it out, after this great roll-out," McHenry said.

Rep. Jim Cooper, D-Tenn., offered part of his allotted time to any witness who wished to complete a response, saying they had been badgered and treated unfairly.

"I believe in fairness, and the American people do not want to see a kangaroo court here," he said. "The way this hearing has been conducted does not encourage good private-sector people to want to join the federal government."

Before a witness could speak, Issa asked Cooper, "Have I cut off anyone's answer here today?"

"No witness here today has been cut off," Issa said. "Kangaroo courts is quite an accusation. And I hope the gentleman from Tennessee, when he uses the term 'kangaroo court' in the future, will think better of making an accusation."

Saying that every witness had been allowed to complete their answers, Issa said, "This is not a partisan hearing. I will not have it accused of being a partisan hearing. We have a website that the American people have seen doesn't work. We're trying to get to an understanding of why it didn't work so that it doesn't happen again."

"This is a hearing on a broken website," Cooper said, "by a broken committee. And the air is thick with innuendo."

The session, subtitled "The Rollout of HealthCare.gov," is archived at C-SPAN.