Accessibility links
Federal Reserve Nominee Yellen Navigates Confirmation Hearing : The Two-Way Janet Yellen cleared a key hurdle in her path to become the next chair of the U.S. Federal Reserve, after a Senate Banking Committee hearing went smoothly Thursday. The most difficult questions centered on the Fed's stimulus efforts. 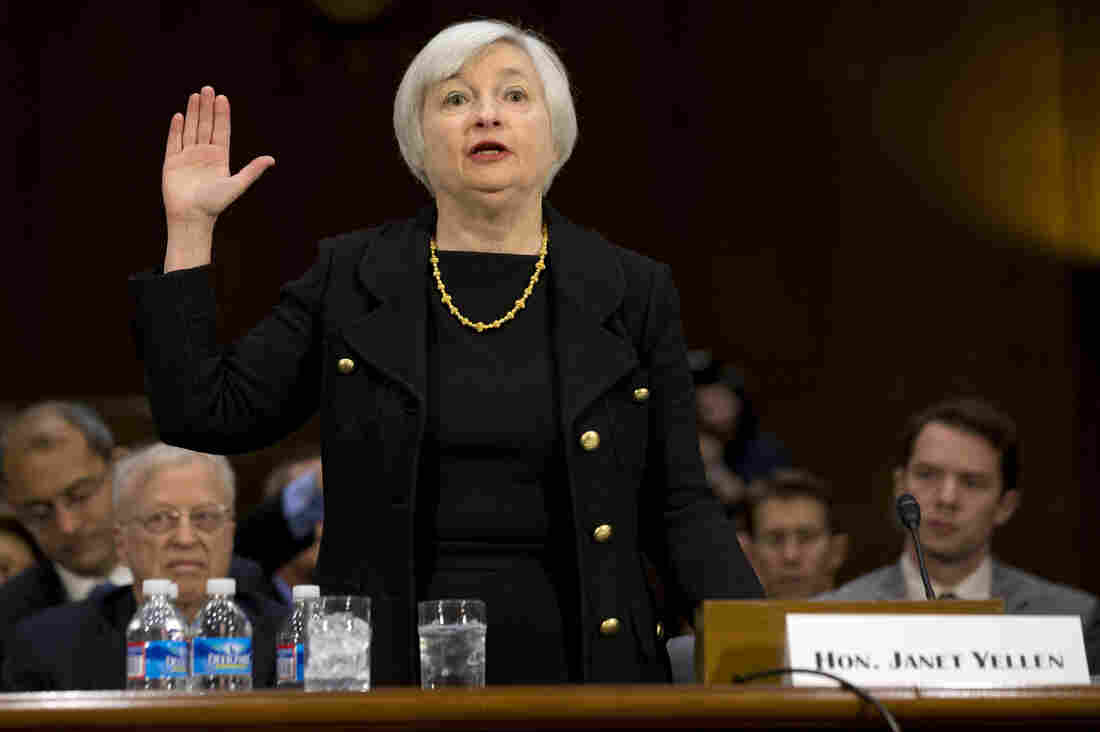 Janet Yellen, President Obama's nominee to become the next chairman of the Federal Reserve Board, is sworn in Thursday on Capitol Hill for her confirmation hearing. Jacquelyn Martin/AP hide caption 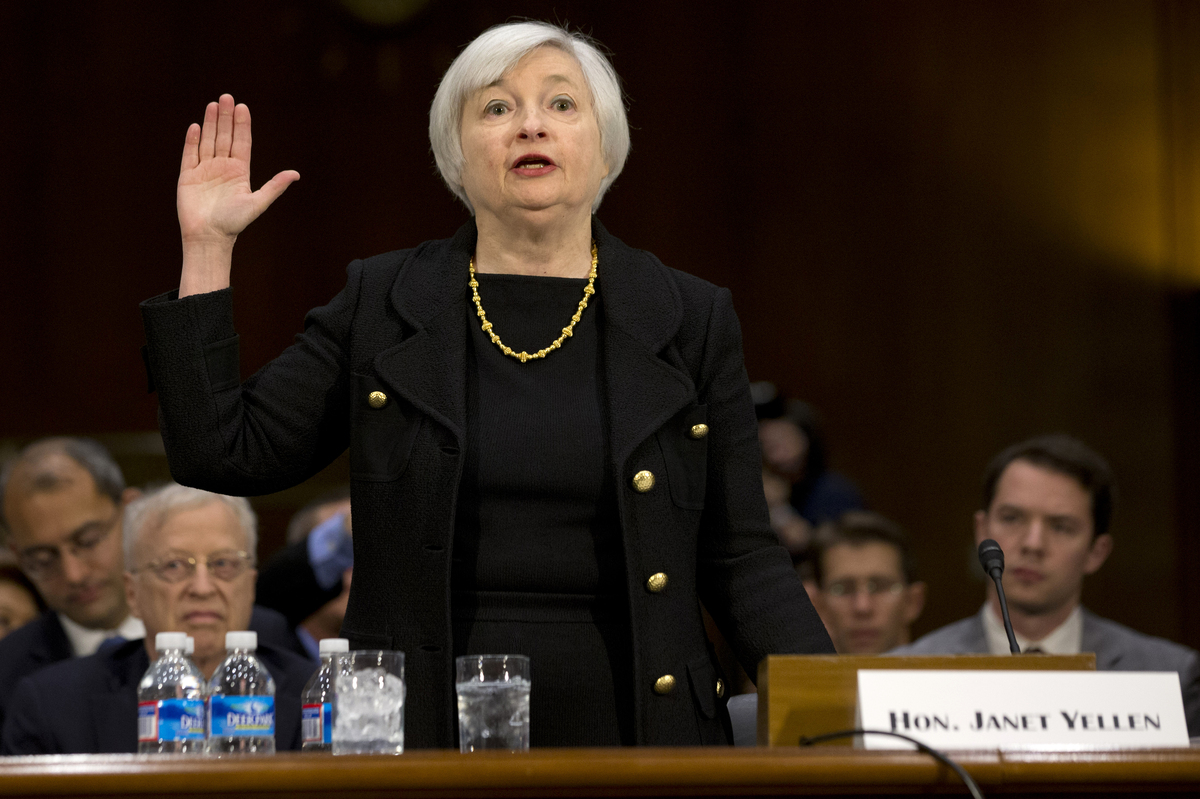 Janet Yellen, President Obama's nominee to become the next chairman of the Federal Reserve Board, is sworn in Thursday on Capitol Hill for her confirmation hearing.

Janet Yellen cleared a key hurdle Thursday, as her confirmation hearing to become the next chair of the Federal Reserve went smoothly. There were only a few snags in roughly two hours of questions and discussions between Yellen and members of the Senate banking committee.

Many of the senators lauded Yellen's extensive experience, as well as her adherence to views they heard her discuss in private meetings on Capitol Hill in recent weeks.

Thursday's hearing (which is archived at C-SPAN) did not include a vote; such proceedings often spark follow-up questions that are asked separately of the nominee. If the panel approves Yellen, the full Senate would vote on her confirmation.

Noting that Yellen "will eventually need five Republican votes for confirmation, because the reality of the modern Senate is that everything takes 60 votes," The New York Times says that Republicans' questions today suggests "those votes may not be so hard to round up."

Much of the hearing centered on the Fed's efforts to help the U.S. economy recover from the recent mortgage crisis. Republicans on the panel asked Yellen about the ongoing stimulus effort and whether it has helped the wealthy more than anyone else.

That view was put forth by Sen. Bob Corker, R-Tenn., who said that, "in many ways, easy money is an elitist policy."

In her response, Yellen acknowledged that the policies have helped investors in the stock market. But she also said that low interest rates had aided a recovery in the U.S. housing market, calling it "broadly beneficial to all those Americans who own homes."

Sen. Pat Toomey, R-Pa., said the stimulus policy, in which the U.S. government buys $85 billion in bonds and securities each month, has hurt savers by keeping interest rates near rock-bottom lows.

"Low interest rates harm savers, it's absolutely true," Yellen told him, noting that people on a fixed income often rely on financial instruments such as certificates of deposit that generate safe — but currently very low — rates of return.

But, she added, "We can't have normal rates unless the economy is normal. At the moment, we have a lot of saving, and not very much investment."

Some of the strongest views came from a Democrat, Sen. Elizabeth Warren of Massachusetts. We've saved a video clip of that exchange on C-SPAN's website.

"The truth is, if the regulators had done their jobs and reined in the banks, we wouldn't need to be talking about quantitative easing," Warren said, "because we could have avoided the 2008 crisis altogether."

Warren went on to say she sees an imbalance in how the Fed handles its monetary and regulatory roles, with the former getting top priority at the expense of the latter.

She finished by asking Yellen, "Do you think that the Fed's lack of attention to regulatory and supervisory responsibilities helped lead to the crash of 2008?"

For a few seconds, the only sound in the chamber was the clicking of cameras. Then Yellen began her response, in which she stumbled a bit at first.

"You know, I think in the aftermath of the crisis, we've gone back and tried to look carefully at what we ... what should have been done differently," she said. "And there have been important lessons learned."

Yellen noted that the Fed had revamped its supervisory practices, particularly in dealing with large banks.

"One of our top priorities now is ramping up our monitoring of the financial system as a whole, to detect financial stability risks," she said. "I think that's something that we weren't doing in an adequate basis before the crisis. And so we missed some of the important linkages whereby problems in mortgages would rebound through the financial system."

Warren closed her remarks by saying she hopes "very much" that Yellen is confirmed and that she would "help keep our financial system safe."

President Obama nominated Yellen in October to fill the post that current Fed Chairman Ben Bernanke will vacate at the end of January.

Bernanke's role at the Fed will not end when he steps down as chairman, though. He will remain on the Board of Governors of the Federal Reserve System until his term expires in 2020.

If confirmed by the Senate, Yellen will become the first woman to head the Fed. She would begin a four-year term as chairman; her term on the Board of Governors would run for 14 years.

The New York Times, which live-blogged today's hearing, clarifies the claim of distinction that Yellen could make if she is elevated to the chairmanship. Noting tweets that have called Yellen the world's first female head of a central bank, the newspaper says that's not so.