Accessibility links
Michigan Man Charged With Murder In Shooting Death On Porch : The Two-Way Prosecutors in Michigan are charging a man with second-degree murder over an incident in which Renisha McBride, 19, was shot in the face after knocking on a door in a suburb west of Detroit. Theodore Wafer has reportedly told police that he feared a break-in.

Michigan Man Charged With Murder In Shooting Death On Porch 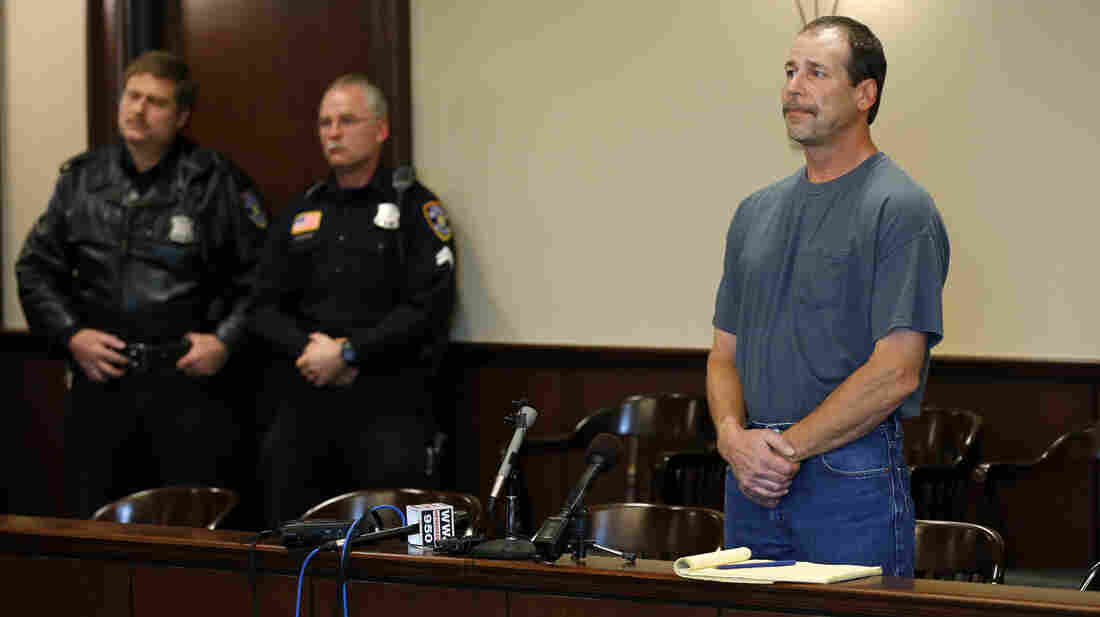 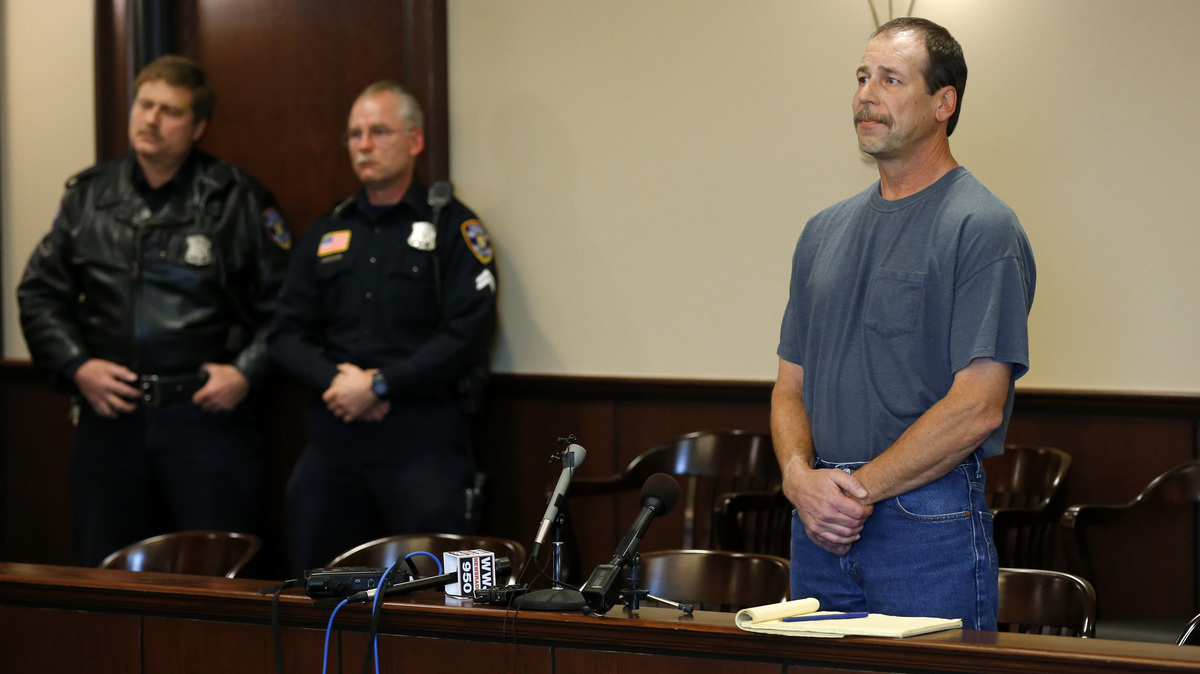 Theodore P. Wafer, 54, charged with second-degree murder in the shooting death of Renisha McBride, appears at his arraignment in Dearborn Heights, Mich., on Friday.

Prosecutors in Michigan are charging a man with second-degree murder for a Nov. 2 incident in which Renisha McBride, 19, was shot in the face after knocking on Theodore Wafer's door at night in Dearborn Heights, a suburb west of Detroit.

McBride's family has said they believe she was seeking help after being in a car wreck hours earlier. We've updated this post with the latest information we have.

Update at 6:40 p.m. ET: Comments And Questions From Detroit

The case has raised racial tensions in Detroit, where a nearly two-week delay in charging Wafer had brought protests. It has also echoed some of the elements of the Trayvon Martin case, in which an unarmed black teenager was shot and killed by a white man.

Prosecutors say that the charges against Wafer have nothing to do with race. But as Sarah Cwiek reports for All Things Considered, "the racial difference here already hangs over the case."

In Detroit, people wonder about a racial motivation for the shooting, Cwiek says.

"And it's like, was he just afraid because of the color of her skin, or was he honestly afraid?" Detroit resident Gerita Bailey tells Cwiek.

This afternoon, McBride's parents spoke to the media.

Rejecting Wafer's reported claims that the shooting was an accident, Monica McBride said, "You took a life. And you took a beautiful life, that was starting to blossom into a beautiful woman."

Calling Wafer "this monster that killed my daughter," Walter Ray Simmons said he hopes the accused is sent to prison for the rest of his life.

At today's arraignment, one of Wafer's attorneys, Mack Carpenter, said that his client will be "completely exonerated" after all the facts of the case emerge.

"Because of the time," he said, "her condition, and all the circumstances."

Update at 2:55 p.m. ET: Wafer Is Arraigned; Some Details Emerge

A bond of $250,000 was set for Theodore Wafer on Friday afternoon, when he was arraigned in court. A preliminary examination is set for Dec. 18.

Wafer's attorney, Mack Carpenter, revealed more information about his client, according to The Detroit Free Press, telling the judge that Wafer has a security clearance as part of his job at Detroit Metro Airport, where he's been employed for 10 years.

Wafer also "attended Northern Michigan University in Marquette for a year and cares for his 81-year-old mother," the newspaper reports, citing Carpenter.

Wafer has reportedly told police that he feared a break-in when he heard sounds on his porch. Officials said Friday that the fatal shot was fired through the house's open front door, passing through a locked screen door before striking McBride.

Wayne County Prosecutor Kym Worthy announced the charges against Wafer on Friday. He also faces charges of manslaughter and possession of a firearm during a felony. Worthy said she believes Wafer owns the weapon legally.

Earlier Friday, officials released a toxicology report showing McBride was found to have high levels of alcohol in her system, along with trace amounts of marijuana. No toxicology test was performed on Wafer, Worthy said.

The case has attracted national attention, with civil rights leaders calling for an investigation into what they say could be a case of racial profiling. McBride was black; Wafer is white, prosecutors said Friday.

When asked today whether race is an issue in the case, Worthy said, "No, it's not relevant at all, not to our charging decision."

Wafer, a 54-year-old homeowner, has reportedly admitted to shooting McBride in the early hours of Nov. 2 with a 12-gauge shotgun after hearing what he thought were the sounds of someone trying to break into his house. Today, Worthy said the home showed no signs of an attempt to force entry, and that according to the evidence, Wafer opened the front door himself.

Worthy said the evidence suggests McBride knocked on a locked screen door and that the shot that killed her was fired through the screen door. She also said that it doesn't appear Wafer and McBride knew each other. 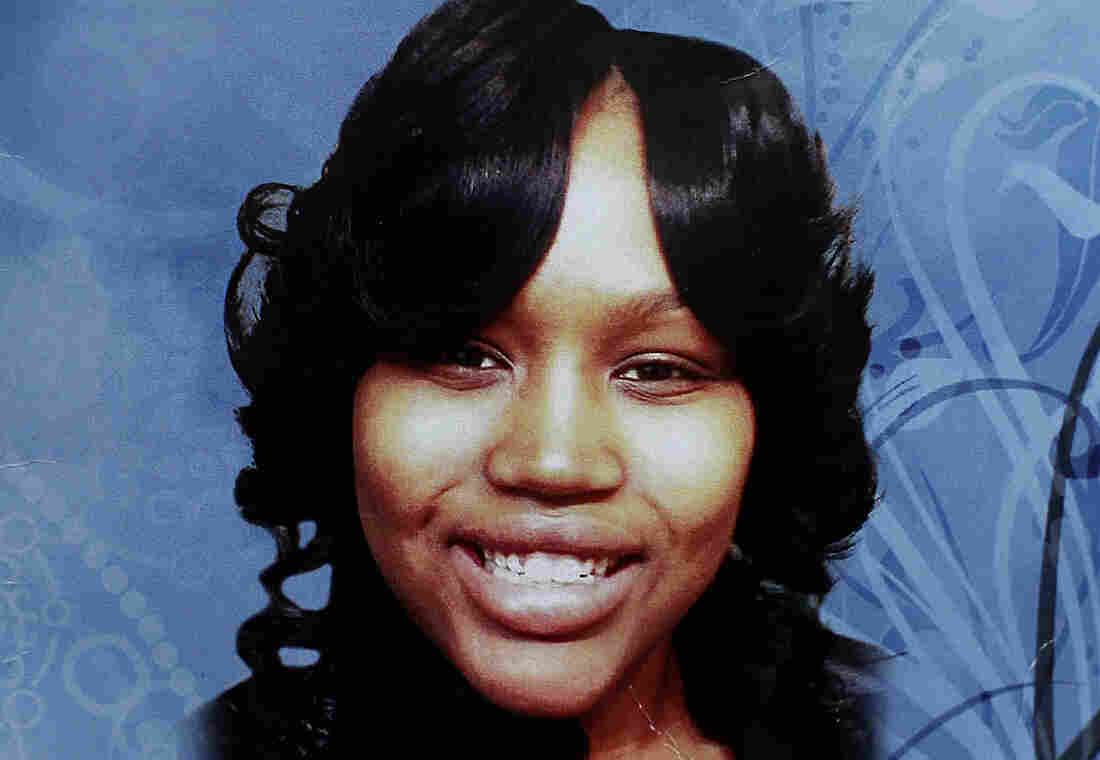 A photo of Renisha McBride on a program at her funeral service in Detroit. Murder charges have been filed over McBride's death from a shotgun blast at a house in Dearborn Heights, Mich., on Nov. 2. Landov hide caption 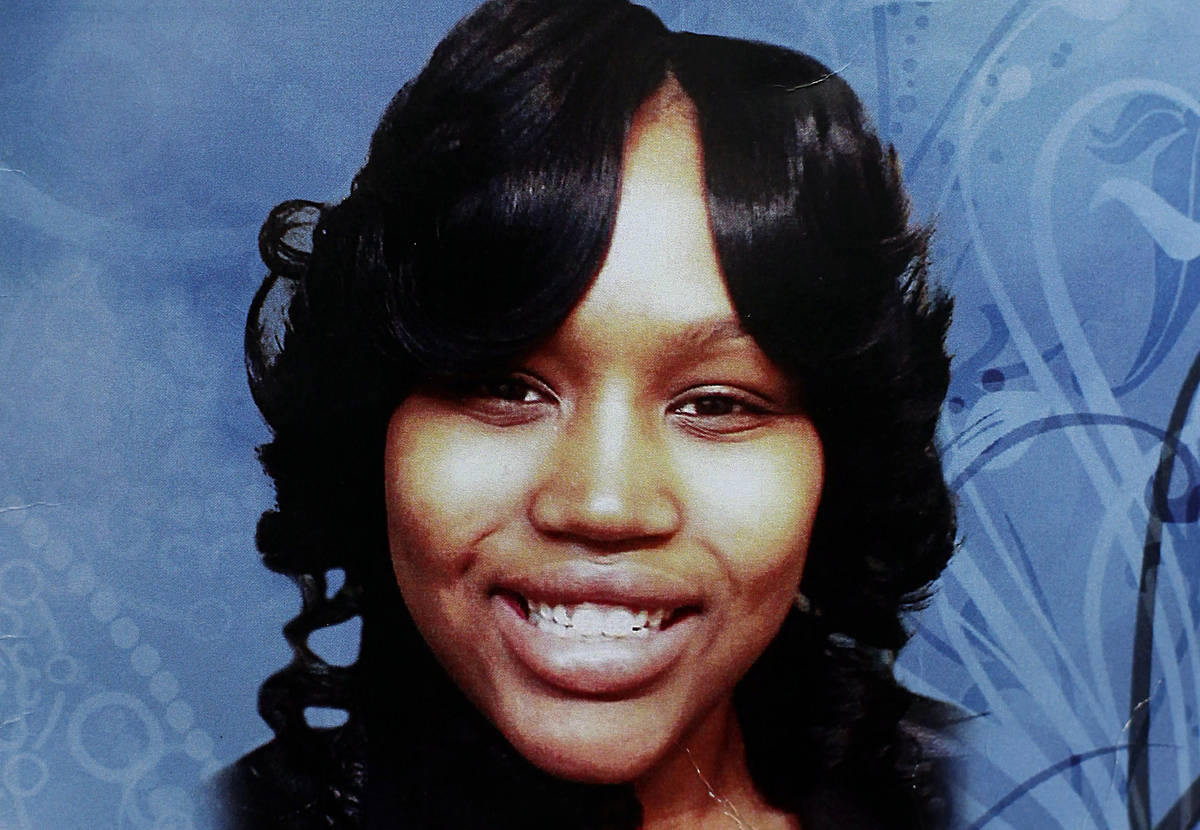 A photo of Renisha McBride on a program at her funeral service in Detroit. Murder charges have been filed over McBride's death from a shotgun blast at a house in Dearborn Heights, Mich., on Nov. 2.

An arraignment for Wafer has been scheduled for Friday afternoon. Prosecutors expect him to turn himself in before that appearance.

"We believe that Renisha McBride's death was no accident and that the shooter should have dialed 911 both for his own safety and the safety of Renisha," Thurswell said in a statement issued earlier this week, "rather than shooting her in the face on his front porch."

In announcing the charges, Worthy also described the statute on self-defense in Michigan law.

"There is no duty to retreat when you're in your own house. But someone who claims self-defense must have an honest and reasonable belief of imminent death" or other significant harm, she said, adding that the person would need to use force to prevent that imminent harm.

While some of the details of what happened that night haven't been made public, The Detroit Free Press has assembled what may be a rough chronology:

"According to police, McBride's vehicle struck a parked vehicle in Detroit more than two hours before she was shot. Police said that just before 1 a.m. Nov. 2, a witness called 911 to say a woman was speeding down the street in the area of Bramell and Majestic, hit a parked vehicle, got out of her car and left.

"She later returned to the scene, according to a second 911 call, but was gone when police arrived. That caller told police the woman appeared to be intoxicated."

Citing sources, the newspaper says McBride was driving a car that was registered in her father's name. 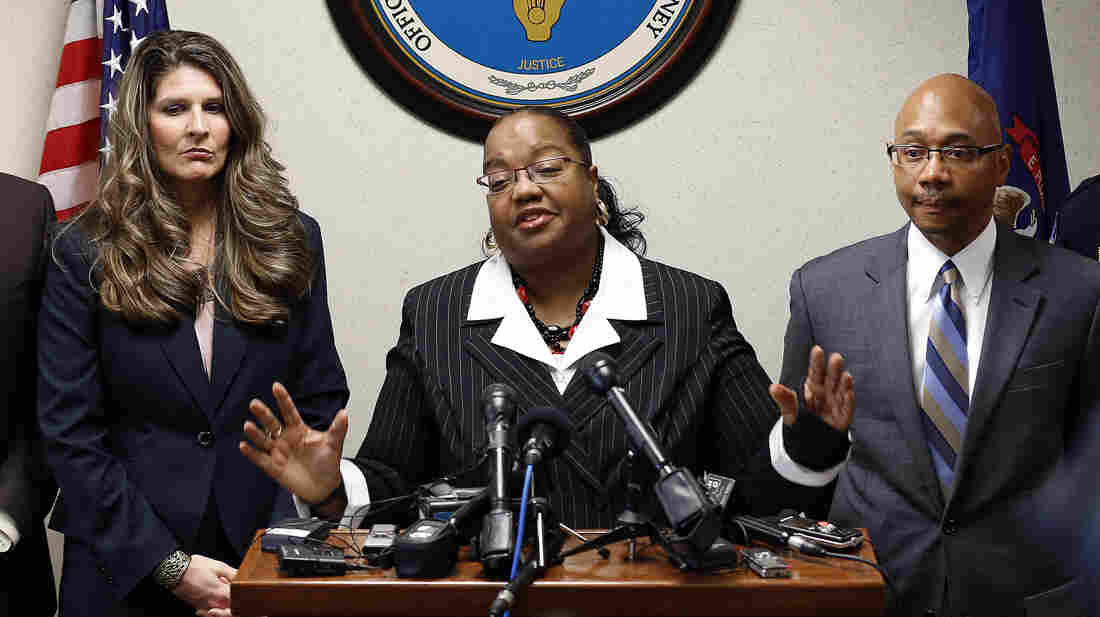 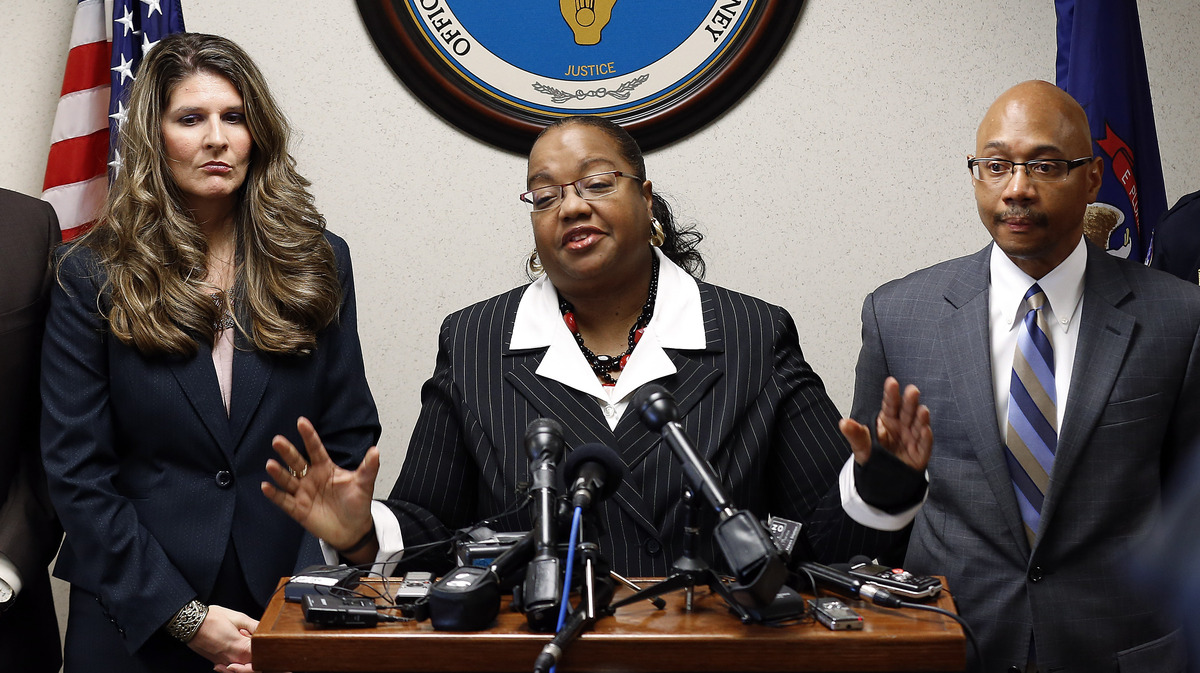