Accessibility links
After Chaotic Session, Toronto City Council Strips Mayor Ford Of Power : The Two-Way After Rob Ford admitted to smoking crack, he has faced an unrelenting set of scandalous allegations, including that he drove drunk, sexually harassed one of his staff members and that he was seen doing lines of cocaine at a bar. 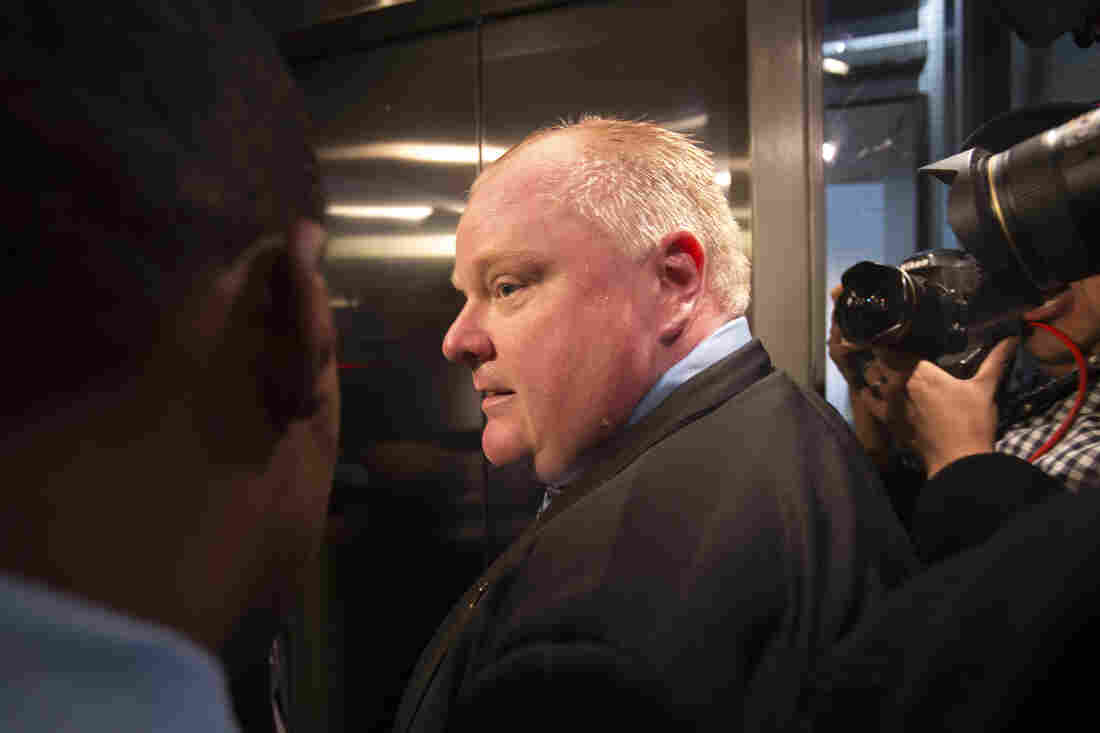 Toronto Mayor Rob Ford is surrounded by the media as he waits for an elevator outside his office at Toronto City Hall on November 15. Geoff Robins /AFP/Getty Images hide caption 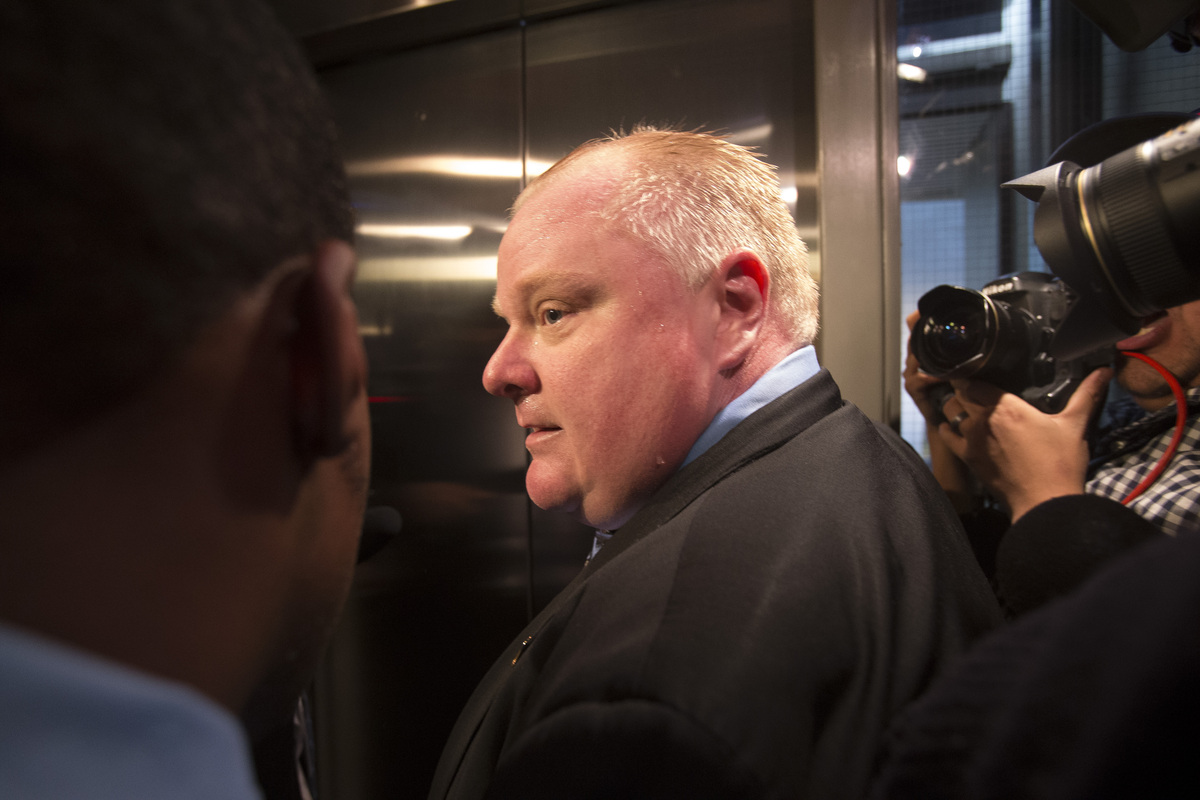 Toronto Mayor Rob Ford is surrounded by the media as he waits for an elevator outside his office at Toronto City Hall on November 15.

After a chaotic session that saw Mayor Rob Ford lash out at the public and topple a colleague, the Toronto City Council voted to strip Ford of most of his duties and slashed his budget to 40 percent of what it used to be.

As the council discussed the legality of the motion on Monday, the body erupted into chaos. At one point, Ford and his brother Doug Ford, a council member, started screaming at the public.

Reacting, others began chanting, "Shame, shame, shame!" Ford began running across the chamber and knocked over a colleague, who was later said to have a swollen lip.

Meanwhile Mayor Ford, compared the action taken by the council to the time Iraq attacked Kuwait.

Ford insinuated that his retaliation against the council would be like the attack the U.S. launched against Iraq.

The Toronto Star reportsthe motion approved by the council is "unprecedented." The big issue here is that the city council would more than happily impeach Ford. But under the law, Ford can't be removed. Not only that, but the council really has no legal authority to curb his "statutory obligations."

The council has worked with its lawyers, however, and figured that by reducing most of the mayor's duties and slashing his staff and budget to 40 percent of what they used to be, they still comply with the law while punishing Ford.

All of this comes, of course, after Ford admitted to smoking crack and then faced an unrelenting set of allegations, including that he drove drunk, sexually harassed one of his staff members and that he was seen doing lines of cocaine at a bar. As Saturday Night Live made clear in its sketch about the mayor, Ford has not helped his own cause, holding one outrageous news conference after another.

As the Star reports, today's proceedings may not amount to much, because the mayor plans to challenge any action the council takes:

"Even if council votes overwhelmingly to curb Ford's power, he could soon move for a stay of the decision pending the outcome of a court challenge, lawyer George Rust-Eye said Monday on CBC radio.

" 'I have to get together with the mayor, I have to analyze, very carefully with him, the impact of whatever council decides today on his office, and whether or not it does hamstring him from doing what he's required by statute to do.'

"If it does, the next step would be to consider what court action could be taken to overturn. The actual litigation could take months, and there is always the possibility of an appeal, he said."

As Mark reported last week, the city council has already stripped the mayor of his emergency powers and his ability to fire and hire.

Update at 3:21 p.m. ET. Ford Knocked Another Councillor Over:

While he running from one side of the chamber to the other, Mayor Rob Ford knocked over a fellow council member. Via the CBC, here's video:

A few minutes ago, as the council was debating the legality of the motion before them, Mayor Ford and his brother began screaming at people in the public gallery.

The speaker called for a 10 minute recess and the chamber erupted into chaos, with council members chanting "Shame, shame, shame!"

Here's a snippet of audio: