Accessibility links
No Motive In Newtown Report, But Many Details About Lanza : The Two-Way At more than 50 pages, the summary report issued Monday gives an overview of findings from the investigation into the December 2012 shooting, while omitting controversial details such as 911 call recordings. 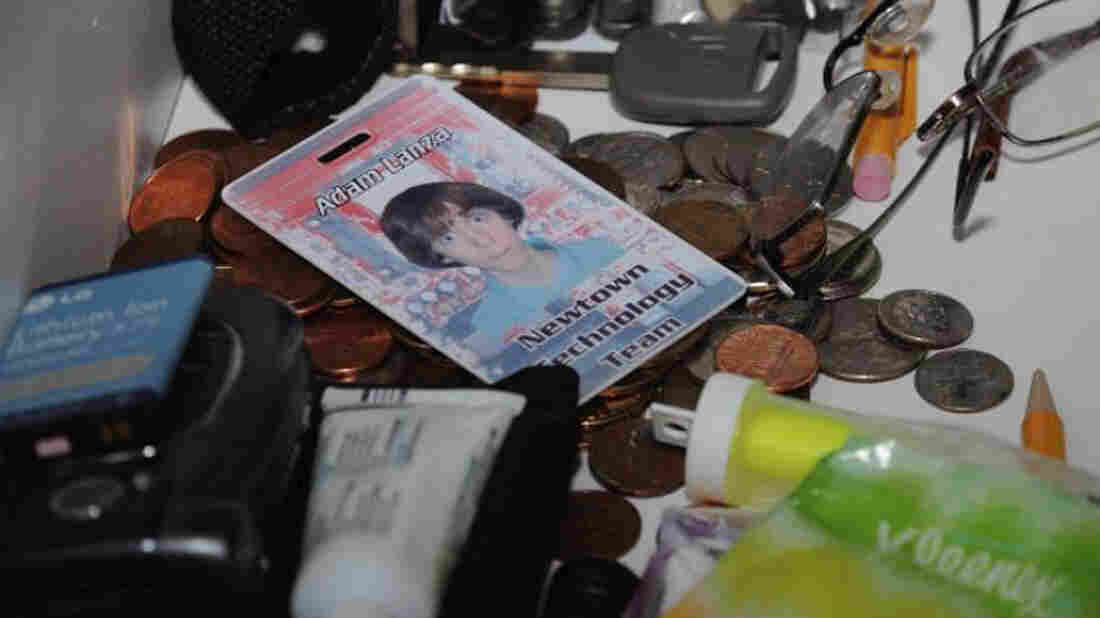 An image from a Connecticut State Police report on the shootings at Sandy Hook Elementary School shows a scene at 36 Yogananda St. in Newtown, Conn., where Adam Lanza killed his mother before driving to the school and killing 26 students and staff last December. AP hide caption 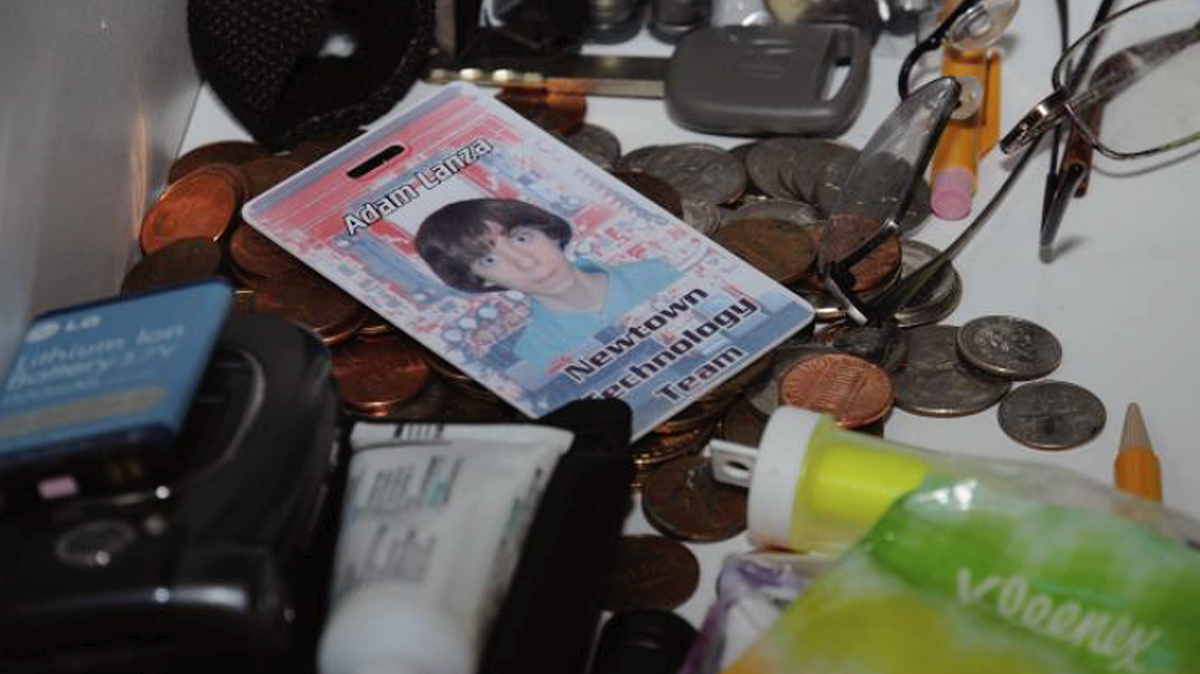 An image from a Connecticut State Police report on the shootings at Sandy Hook Elementary School shows a scene at 36 Yogananda St. in Newtown, Conn., where Adam Lanza killed his mother before driving to the school and killing 26 students and staff last December.

Investigators say they haven't determined why Adam Lanza killed 26 students and staff at Sandy Hook Elementary School in Newtown, Conn., last December. But they know he acted alone in that attack and his mother's murder, according to a summary report released weeks before the one-year anniversary of the shooting rampage.

At more than 50 pages, the summary released Monday gives an overview of the investigation into the shootings at the school; it also omits controversial details such as 911 call recordings. Reflecting months of investigative efforts, it confirms details about that day — Dec. 14, 2012 — without pointing to a reason for the tragedy.

The report also lauds the response of the school's staff and law enforcement to the attack that killed 20 students, saying that their actions "saved many children's lives."

As The Newtown Bee notes, the summary may help lay to rest several conspiracy theories about whether Lanza had help in the attack: A man who ran from the school at the time was a parent, according to the report, and two people held at gunpoint in the woods nearby were reporters.

"This investigation, with the substantial information available, does not establish a conclusive motive," State's Attorney Stephen Sedensky writes in the report's conclusion. He adds, "There is no clear indication why Sandy Hook Elementary School was selected, other than perhaps its close proximity to the shooter's home."

Police say Adam Lanza's Garmin GPS device showed that he drove past Sandy Hook Elementary on the day before the shootings, making what seems to have been an uninterrupted loop that began and ended at his home. The round trip took only 23 minutes.

As for Lanza, when he killed himself the next day at age 20, he was 6 feet tall and weighed only 112 pounds, according to the report.

The police summary paints the fullest picture yet of Lanza, even as it notes the impossibility of determining how factors such as his mental health might have contributed to the attack. Its review of Lanza's school years includes this entry:

"The fifth grade was also the year that, related to a class project, the shooter produced the 'Big Book of Granny' in which the main character has a gun in her cane and shoots people. The story includes violence against children. There is no indication this was ever handed in to the school."

That "Big Book" is described as a bound spiral booklet containing mock advertisements, skits from "an imaginary TV show" and a longer narrative.

Photos in the report document what investigators saw at the Lanzas' house on Yogananda Street in Newtown. That's where Nancy Lanza was found in her bed, dead of gunshot wounds that marked the beginning of the day's violence.

A series of evidence photos labeled "second floor computer room" show multiple gaming consoles and game cases, along with what looks to be a removed computer hard drive.

The photos also show that a gun safe was kept in a closet in the same room, along with ammunition. In the images, the gun safe is standing open, with five empty racks next to a rifle.

A desk next to the gaming consoles includes a drawer that also held boxes of ammunition, along with several curved clips.

According to the summary report, the contents of a computer hard drive investigators believe belonged to Adam Lanza contained numerous references to firearms and mass murder.

The hard drive also contained two files that the report simply labels "Writing." One of the files, called "babies," contains fictional stories of "being attacked by babies and attempts to defend against them." The other, titled "Lovebound," is a screenplay "describing a relationship with a 10 year old boy and a 30 year old man" — one of several pedophilia references on the computer and elsewhere in the house, according to investigators.

The report also describes Lanza's life before the attack. In 2006, it says, "the shooter had an overall IQ in the average range. He had no learning disability."

But IQ and behavioral tests that "required the touching of objects could not be done," according to the report, which says Lanza's behavior seems to have begun to change when he was in the seventh grade.

That's also when a plan was formed to help him cope with emotional and developmental problems. The recommendations included medication, desensitization and tutoring, along with an attempt to ease him into a regular classroom routine.

"The shooter refused to take suggested medication and did not engage in suggested behavior therapies.

"Over the years his mother consistently described the shooter as having Asperger's syndrome. She had a number of books in the home on the topic. She also described the shooter as being unable to make eye contact, sensitive to light and couldn't stand to be touched. Over time he had multiple daily rituals, an inability to touch door knobs, repeated hand washing and obsessive clothes changing, to the point that his mother was frequently doing laundry.

"In 2006, the shooter's mother noted that there were marked changes to the shooter's behavior around the seventh grade. Prior to that, he would ride his bike and do adventurous things such as climbing trees or climbing a mountain. He had stopped playing the saxophone. He had been in a school band but dropped out. He had withdrawn from playing soccer or baseball which he said he did not enjoy."

One activity it seems Lanza kept up with until a month before the shooting was playing the game Dance Dance Revolution at a local theater lobby, sometimes for hours. An acquaintance of Lanza told investigators that they had played the game often, and that Lanza was "capable of laughing, smiling and making jokes, though always in a dry fashion."

As for what they talked about, the acquaintance said the topics ranged from current events to "chimpanzee society and how they interacted."

The report concludes, "It is important to note that it is unknown what contribution, if any, the shooter's mental health issues made to his attack on [Sandy Hook]. Those mental health professionals who saw him did not see anything that would have predicted his future behavior."

The summary also states that when he killed his mother and attacked the school, Lanza "knew his conduct to be against the law. He had the ability to control his behavior to obtain the results he wanted, including his own death. This evidence includes his possession of materials related to mass murders, his removal of the GPS from his car, his utilization of ear plugs, the damaging of the hard drive and waiting for his mother's return from New Hampshire."

Even before the State Police report summary was released Monday, concerns were raised in Newtown, where officials bolstered police presence at all schools, citing increased traffic and media attention. 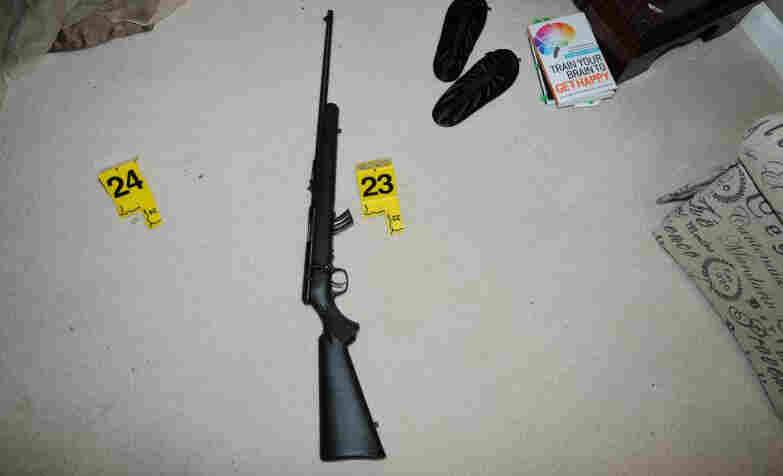 A crime scene photo provided by the Connecticut State Police shows a rifle in the master bedroom in the Lanzas' house on Yogananda Street. Getty Images hide caption 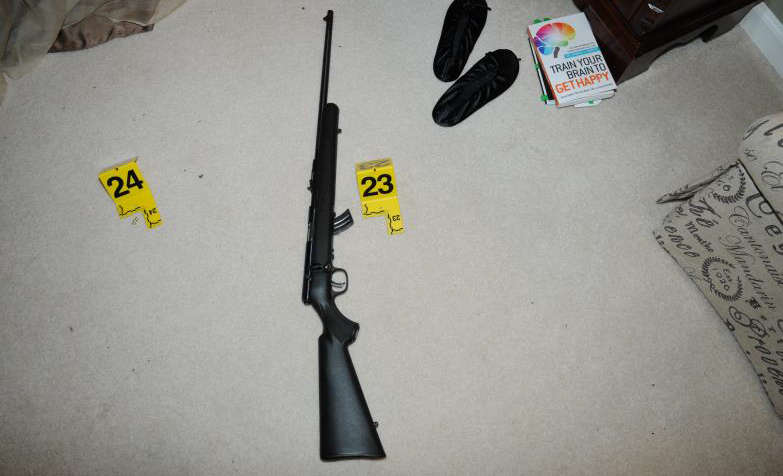 A crime scene photo provided by the Connecticut State Police shows a rifle in the master bedroom in the Lanzas' house on Yogananda Street.

The community is still working to build a sense of normalcy as the first anniversary of the attack on Sandy Hook Elementary approaches. The town began destroying the school last month; its students are attending classes at a nearby school while a new facility is being built in Newtown.

Some of the summary's details hint at what might be included if the full State Police report, thousands of pages in length, is released — something that could happen within weeks.

"The process of redaction is underway," according to the Connecticut criminal justice website. "The State Police are expecting to complete the redaction process before the anniversary of this tragedy."