Accessibility links
World Cup 2014 Draw Is Set: U.S. Will Face Germany, Portugal, Ghana : The Two-Way Currently the world's No. 14 team, the U.S. must finish in the top two among Germany (No. 2), Portugal (No. 5) and Ghana to advance. Another group will pit England against Italy, Uruguay and Costa Rica. The tournament begins in Brazil in June. 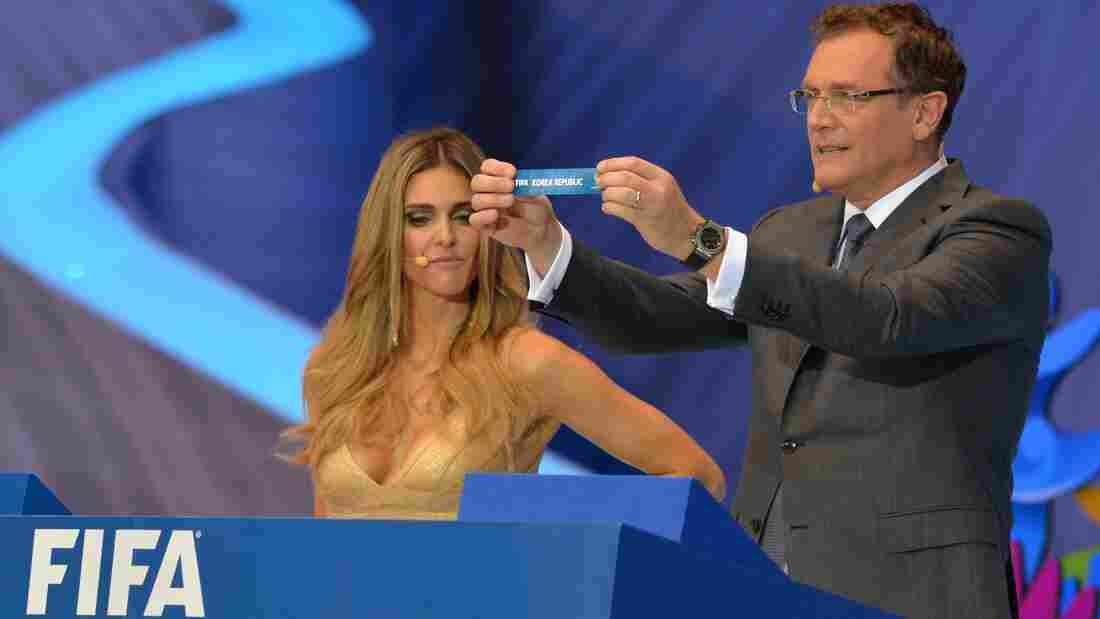 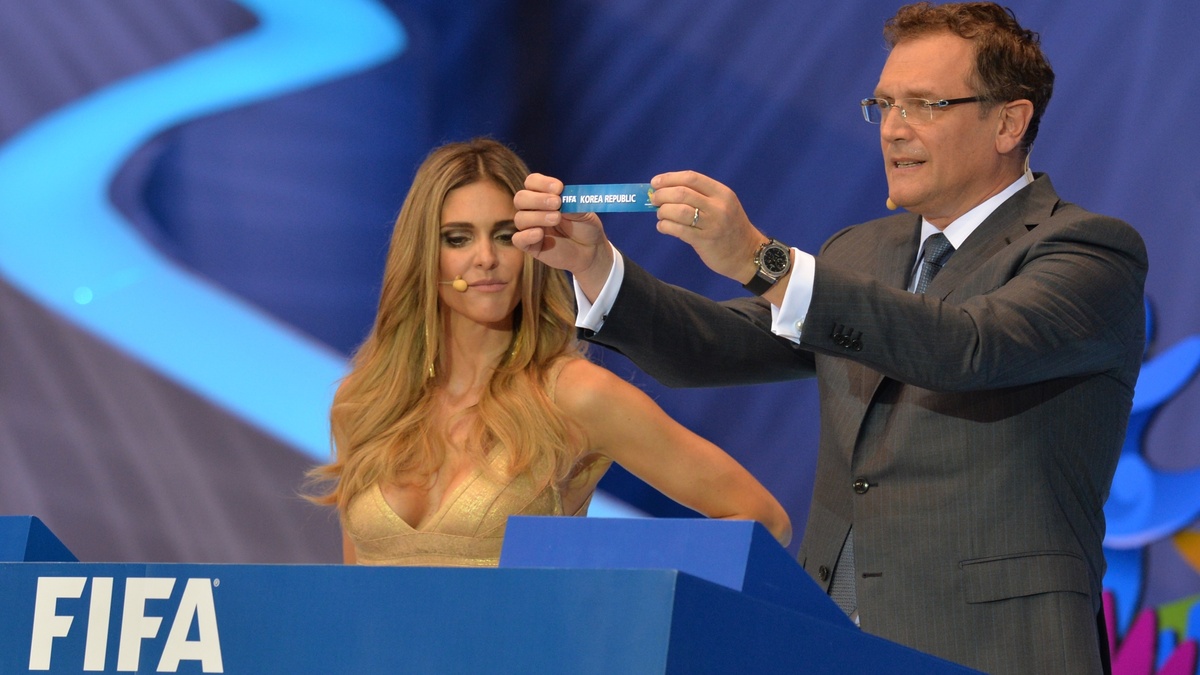 FIFA Secretary-General Jerome Valcke shows a paper with the name of the Korea Republic as Brazilian presenter Fernanda Lima looks on during the final draw of the Brazil 2014 FIFA World Cup Friday.

The final draw of the 2014 World Cup in Brazil was announced Friday. The U.S. team will face Germany, Portugal and Ghana in Group G; host Brazil will face world No. 16 Croatia in Group A. Only the top two teams of each group advance to the next round.

The draw puts the U.S., currently ranked as the world's No. 14 team, in the same group with the world's No. 2 (Germany) and No. 5 (Portugal). Ghana is ranked 24th. The showdown with Germany has the potential to be bittersweet for Jürgen Klinsmann, the coach of the U.S. team who was a star for German World Cup teams in the 1990s.

An argument could be made that the U.S. is in that group this time around. But another group that looks to be especially tough is Group D, featuring three previous champions — Italy (currently No. 7), Uruguay (No. 6) and England (No. 13) — along with Costa Rica (No. 31).

An image from the FIFA website shows the final draw of the 2014 World Cup in Brazil. The U.S. team will face Germany, Portugal and Ghana in group play. FIFA hide caption

The U.S. team will play its first match against Ghana on June 16 in Natal. They then travel to Manaus to face Portugal. The Manaus location has been a point of contention for some coaches, who have said they don't want their teams playing in the heart of the Amazon.

From Brazil, NPR's Lourdes Garcia-Navarro notes that the draw will make the U.S. travel thousands of miles during the first round alone.

The team could rack up nearly 9,000 miles in air travel for its games, which also include a stop in Recife, in Brazil's northeast, according to The New York Times.

"We hit the worst of the worst," Klinsmann says of today's result, The Times reports. "It's one of the most difficult groups in the whole draw. It couldn't get any more difficult or any bigger. But that's what the World Cup is about and we'll take it on. Hopefully we can surprise some people."

For the geographically challenged, we note that at nearly 3.3 million square miles, Brazil is the fifth-largest country in the world.

Also of note, the first round will bring a rematch of the 2010 World Cup final, as Spain will play the Netherlands.

You can see the draw at the website for FIFA, soccer's international governing body.

The draw was announced Friday to a packed auditorium in Bahia, Brazil. The tournament featuring 32 national teams is set to begin in June.

This is the view that global TV commentators are getting of the #worldcup #FinalDraw! - http://t.co/PUFe2Ya4Op pic.twitter.com/UZhO0QAzrP

Entering today's draw, the top-seeded teams for the tournament were Brazil along with (in alphabetical order) Argentina, Belgium, Colombia, Germany, Spain, Switzerland and Uruguay — reflecting the host country and the top teams in the world rankings as of October, FIFA says.

The splashy and highly produced ceremony unveiling the tournament's bracket began with a tribute to the late Nelson Mandela, who died Thursday at age 95. Later, Brazil's President Dilma Rousseff also announced a moment of silence for the well-loved leader and activist.

Every four years, soccer fans around the world eagerly await the World Cup draw, dreading a potentially perilous early match-up that could also bring an early exit from the tournament. In previous years, the drama and importance of the draw have led some to suspect conspiracies at work within FIFA, soccer's governing body.

"Not since Forrest Gump have table tennis balls supposedly been so vulnerable to manipulation and sleight of hand," The New York Times reported in 2009, referring to the pingpong balls that are pulled from a pot to determine the match-ups. This year, talk of French machinations and a mysterious "Pot X" have fed suspicions in England, as the BBC reports.

And for anyone doubting the scale of the spectacle of today's announcement, consider that the draw ceremony has a budget that tops $16 million, as the BBC tells us.

This will be the 20th time the World Cup is contested. Brazilian officials have been working to get 12 stadiums ready for the tournament's start in June.

That effort faced a setback this week, when it was announced that Corinthians Arena, the scene of a crane collapse that killed two people, would not be ready in time to meet the formal deadline of the start of 2014 and won't be ready until April.

As we reported after the November collapse, that stadium is slated to host the World Cup opener.