Accessibility links
Asiana Pilot Was 'Very Concerned' Before California Crash : The Two-Way Three people were killed and more than 150 were injured when the South Korean passenger jet crashed at San Francisco International Airport last July. As the NTSB holds an all-day hearing, there's word that the pilot was worried about making a visual approach to the runway. 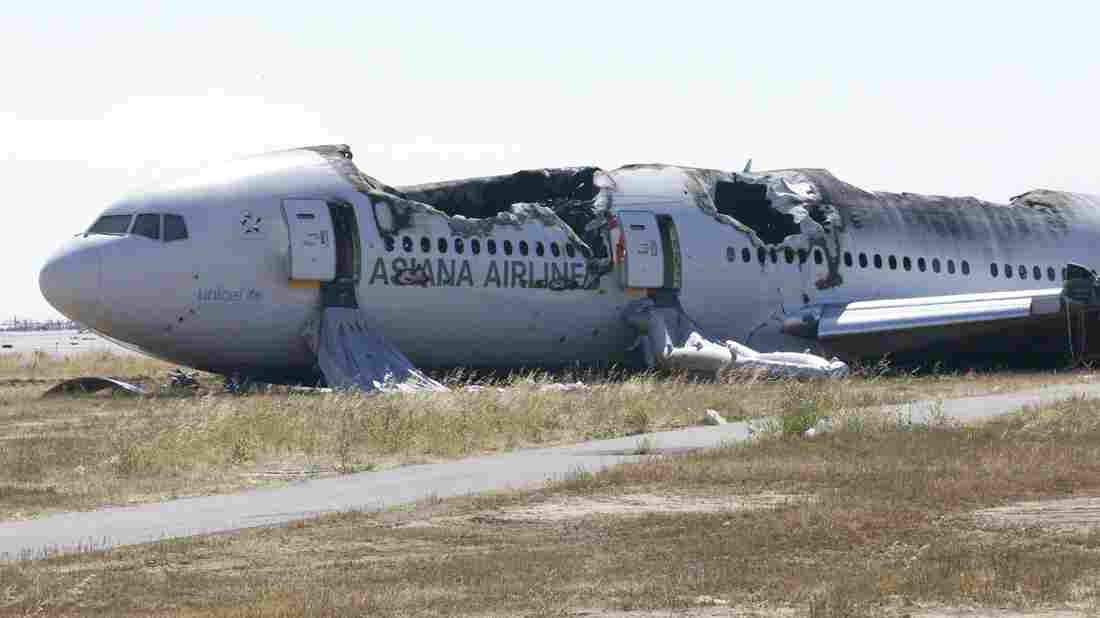 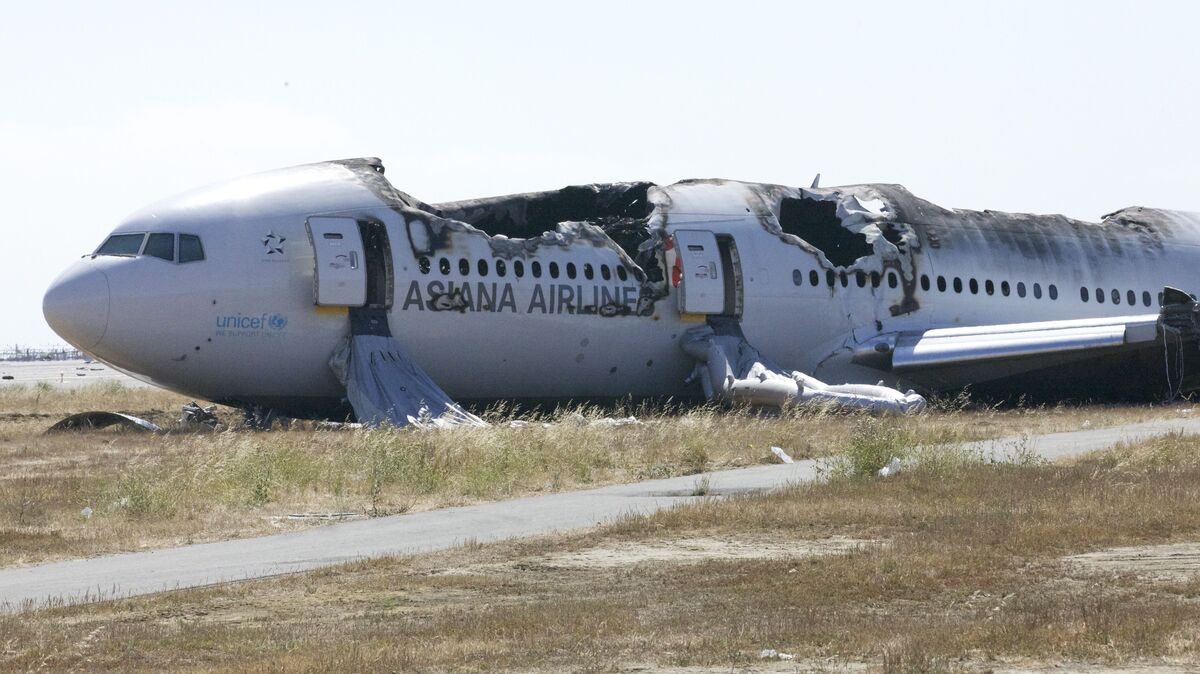 The wreckage of Asiana Airlines flight 214 on the runway at San Francisco International Airport last July.

The pilot of an Asiana Airlines passenger jet that crashed in July at San Francisco International Airport has told investigators he was "very concerned" about trying to land there, The Associated Press writes.

Three people were killed and more than 150 others were injured when the plane approached at too slow a speed and too low an altitude. Its tail struck a seawall. The collision sent the jet twisting and twirling down the runway.

The pilot was nervous because the airport's automatic warning systems had been disengaged due to construction. That meant the crew was making a "visual approach." The 46-year-old pilot had never landed a Boeing 777 at San Francisco. He was joined in the cockpit, though, by an instructor.

The National Transportation Safety Board is holding an all-day hearing about the crash and the results, so far, of its investigation. The hearing is being webcast here. We'll watch for other news and update.

Bill English, the NTSB's lead investigator on the Asiana Flight 214 investigation, said Lee had switched off the autopilot about 3.5 miles from Runway 28, about 1,600 feet altitude and manually changed the auto throttles to idle.

"In this configuration, the auto throttles would not be controlling speed," English said at the start of the hearing.

"At about 500 feet, nearly 1.4 miles from the runway, 'the thrust levels remained at idle as the airplane continued to lose airspeed and sink below the glide path,' English said. ... 'About 11 seconds later, just below 100 feet above the water, the throttle levers were moved fully forward to initiate a go-around, followed four to five seconds later by the stick shaker activation and a verbal call to go-around ... but the action was too late and the main gear and the underside of the aft fuselage struck the seawall. The lowest recorded airspeed was 103 knots, which was 34 knots below the desired airspeed of 137 knots.'"

The Wall Street Journal reports Wednesday that during the five-week period leading up to the crash, when San Francisco's "glidescope" equipment that onboard computers to runways was out of service, "foreign carriers broke off landing approaches to go around and try again at a rate nearly three times as high as their American counterparts, according to the Journal's analysis."

"The Journal examined radar data for 95,436 approaches to San Francisco's runways 28L and 28R, and focused on go-arounds initiated at altitudes of 1,000 feet or lower."

"From Jan. 1 through June 1, the point at which San Francisco's "glideslope" equipment was taken out of service, non-U.S. carriers executed at least 20 go-arounds at or below 1,000 feet in 5,349 approaches to the two runways, for a rate of 3.7 go-arounds per 1,000 flights, about 30% higher than the rate for domestic carriers during the same period."

The pilot, who was being trained on the Boeing 777-200ER, "had momentarily adjusted the power without realizing the plane's computers then assumed he wanted the engines to remain at idle, according to information released [Wednesday] at a U.S. National Transportation Safety Board hearing."

"The documents, while showing the pilots made errors, raise questions about how auto-throttles on Boeing planes are designed and whether there's enough training on using them. The safety board hasn't concluded what caused the crash."

"Lee, 45, 'believed the auto-throttle should have come out of the idle position to prevent the airplane going below the minimum speed' for landing, the NTSB said in a summary of an interview with him. 'That was the theory at least, as he understood it.'"

NTSB chairman Deborah Hersman tells the hearing that there "is an issue in aviation" with cockpit automation and over-reliance on autopilots.