Accessibility links
House Approves Budget Deal; Compromise Heads To Senate : The Two-Way The two-year deal passed despite opposition from Republicans who are part of the Tea Party faction. It was announced earlier this week, after being pounded out by Rep. Paul Ryan R-Wis., and Sen. Patty Murray, D-Wash. 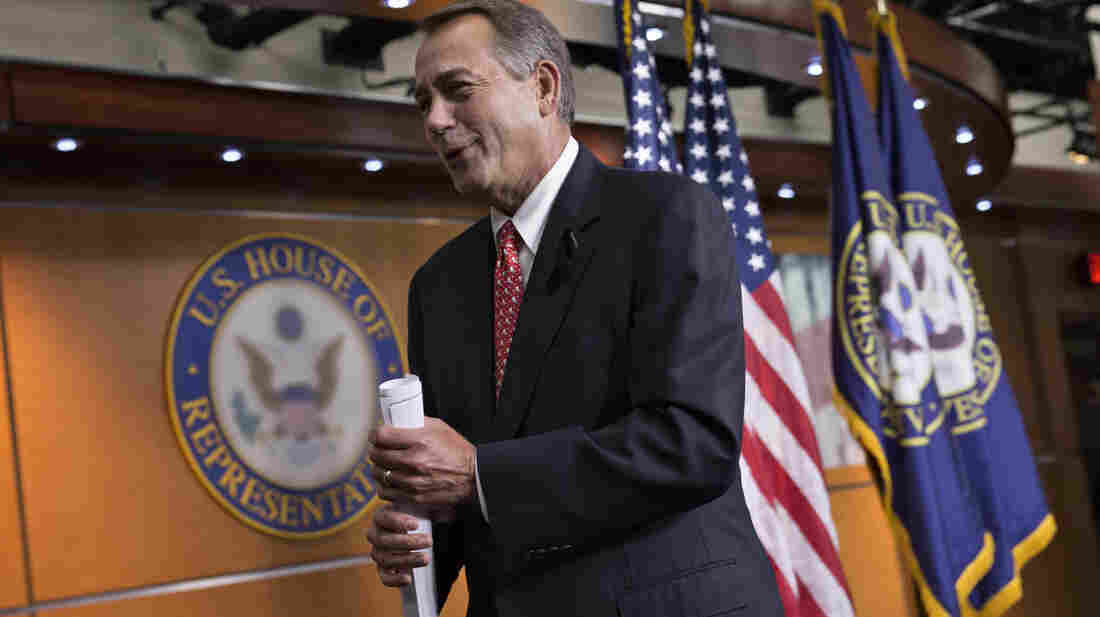 House Speaker John Boehner leaves a news conference Thursday, after criticizing conservative groups that he said held too much sway in Republican politics, "pushing our members in places where they don't want to be." J. Scott Applewhite/AP hide caption 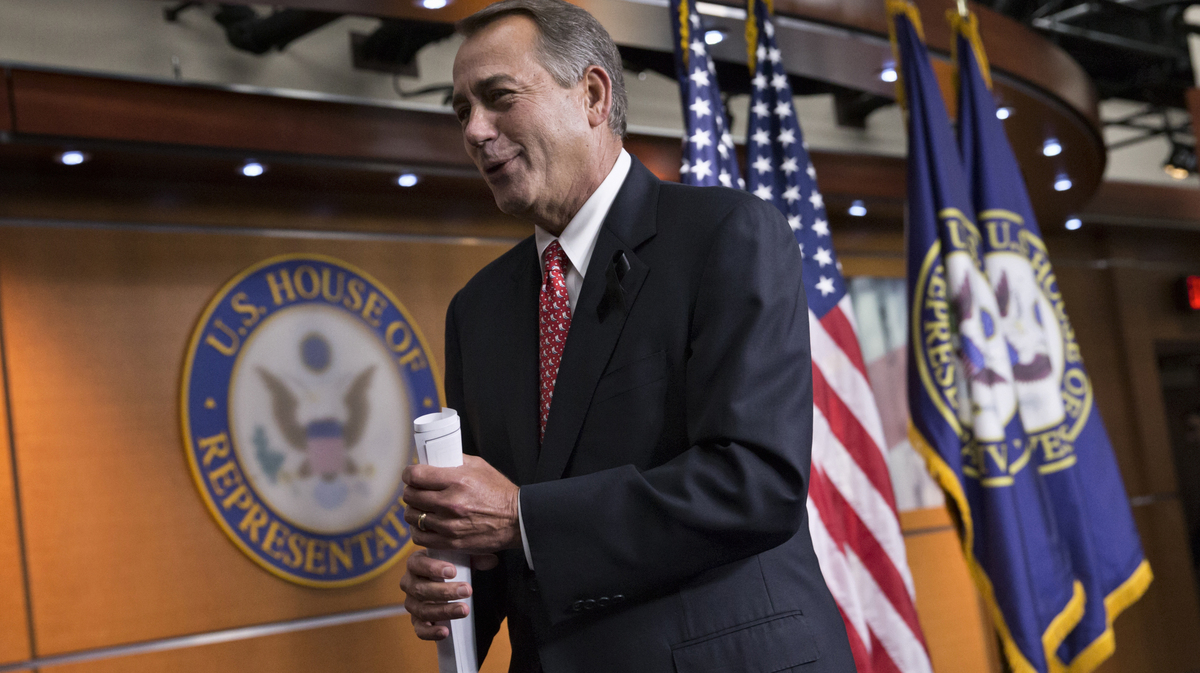 House Speaker John Boehner leaves a news conference Thursday, after criticizing conservative groups that he said held too much sway in Republican politics, "pushing our members in places where they don't want to be."

The House has approved a bipartisan budget deal to cut around $23 billion from the federal deficit over 10 years while removing the threat of a possible government shutdown until 2015. A shutdown deadline had loomed for Jan. 15.

The Bipartisan Budget Act of 2013 also sets spending levels for the 2014 and 2015 fiscal years, which its backers say will add more stability to both the U.S. economy and the government's operations.

The measure was approved 332-94, with more than 160 Democrats joining the Republican majority to vote in favor. More than 60 Republicans voted against the bill.

Passage of the bill had been expected after an early vote to establish debate passed by a tally of 226-195. All Republicans supported that move except Rep. Walter Jones, R-N.C.

The deal was announced earlier this week, after being pounded out by Rep. Paul Ryan, R-Wis., and Sen. Patty Murray, D-Wash. It passed despite opposition from House Republicans in the Tea Party faction.

The deal has been described as having "something for everyone to dislike," giving neither Republicans nor Democrats a substantial policy victory. It is expected to win endorsement in the Senate and be signed into law by President Obama, perhaps as early as next week.

Here are some key criticisms of the bill:

Retired military personnel are also speaking out against the deal, which includes a 1 percent cut to cost-of-living raises for military retirees "who aren't disabled and not yet 62 years old," as CNN Money reports.

"When compounded, the 1 percent cut could result in much more than a 20 percent cut in retiree pension over the course of 20 years," the site says.

"For example, all states would be required to use a Treasury program to crack down on fraud and over-payments in jobless benefits," David Rogers writes at Politico. "And the agreement puts a first-time $487,000 cap on what the government will compensate contractors for the top salaries of their executives."

As the Republican-controlled House prepared to vote on the compromise this week, conservative groups such as the Club for Growth, Heritage Action and Americans for Prosperity all weighed in against it.

The Club for Growth issued a statement today urging a "No" vote on the deal, calling it the "same old same old." The statement ended with a reminder that the group compiles a congressional scorecard, which it widely distributes.

House Speaker John Boehner, R-Ohio, seemed to have no patience for those groups as they lobbied against the measure this week.

"They're using our members and they're using the American people for their own goals," he said on Capitol Hill Wednesday. "This is ridiculous."

He stepped up that attack Thursday.

"I think they're pushing our members in places where they don't want to be, and frankly, I just think that they've lost all credibility," Boehner said, according to The Hill.

At a press briefing today, Boehner was "unhinged," The Hill's Molly Hooper says. The event included the speaker re-enacting a moment from the recent government shutdown.

"If you recall, the day before the government reopened, one of these groups stood up and said, 'Well, we never really thought it would work,' " Boehner said.

"Are you kidding me?!" he yelled, bending over and pulling a face that expressed his displeasure and sent camera shutters clicking.

Hooper adds, "Boehner had a good time, it seemed like, attacking these groups that have been attacking him for the past three years."

As we reported earlier today, Ryan told NPR's Audie Cornish that the budget deal allows Congress to "get some semblance of bipartisanship, get this government working at just a minimum, basic functioning level."

Responding to the argument that the compromise discards Republicans' bargaining leverage by easing parts of the sequester, Ryan said, "I disagree with that, because 92 percent of the sequester remains intact."

He also noted that many Republicans are concerned about a possible round of cuts that would target the military, as part of the next phase of the sequestration.

Ryan said, "the fact of the matter is, you don't get everything you want in a divided government."