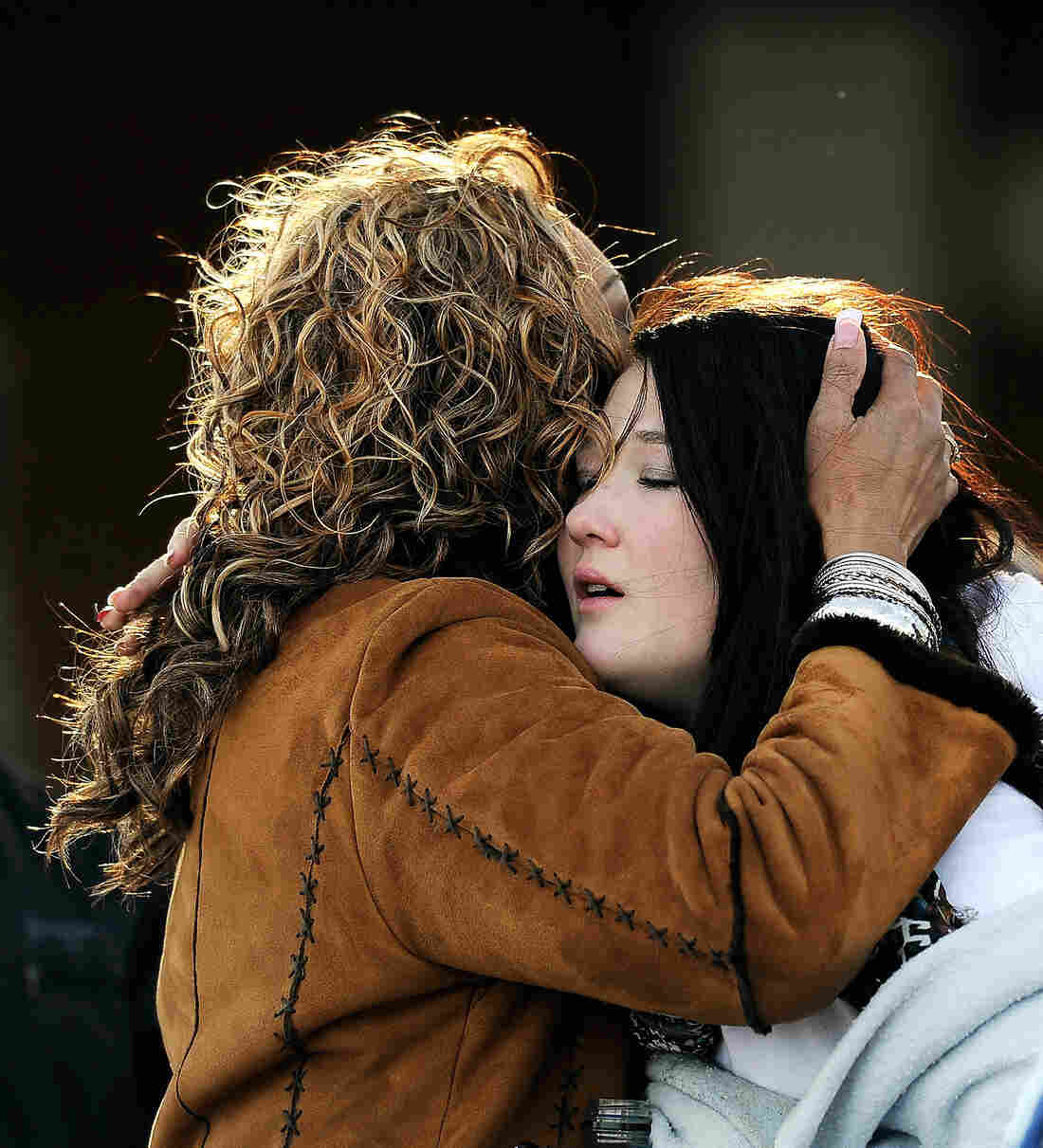 A woman hugs a student at Shepherd of the Hills Church near Arapahoe High School after a school shooting on Friday in Centennial, Colorado. Chris Schneider/Getty Images hide caption 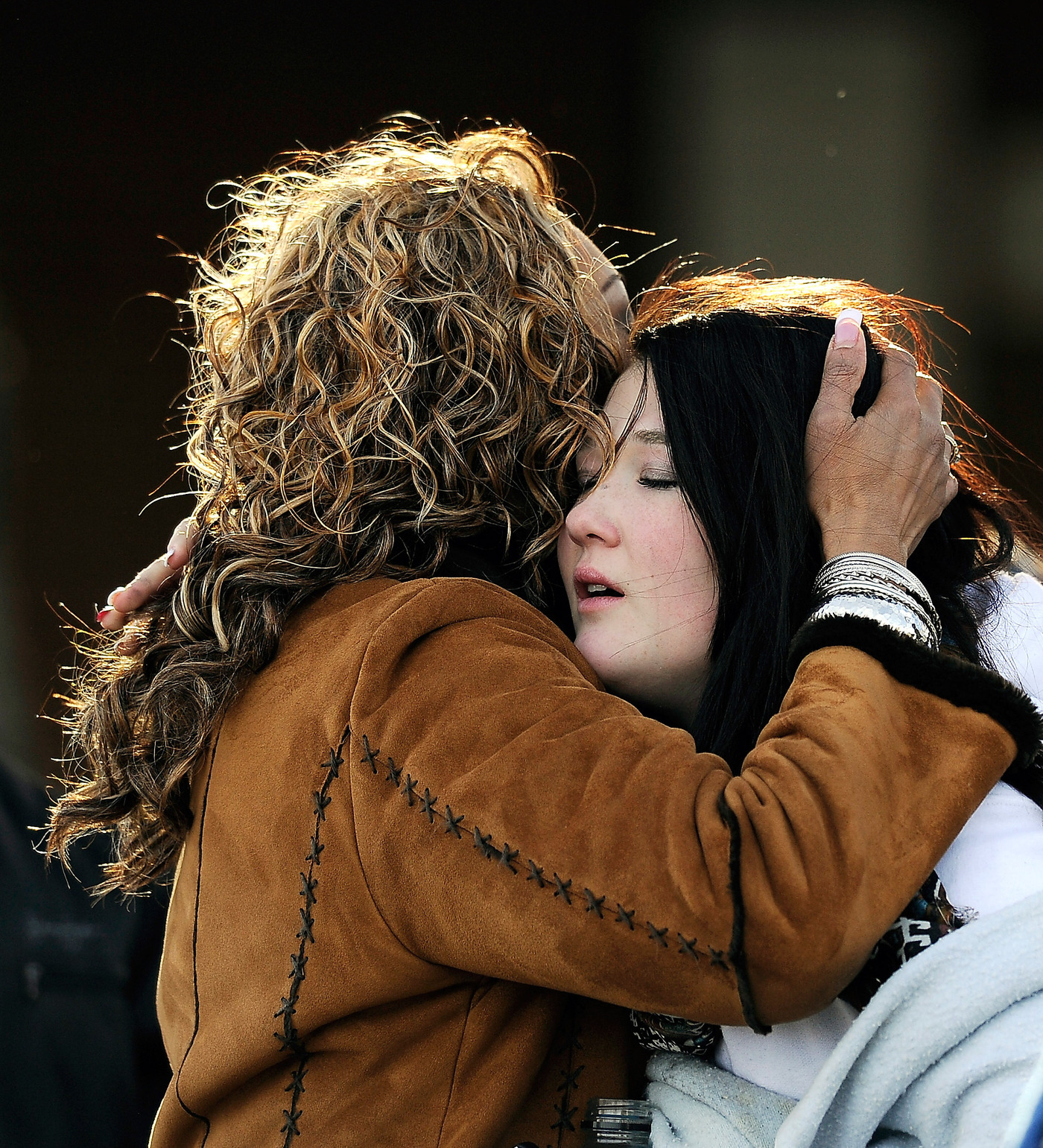 A woman hugs a student at Shepherd of the Hills Church near Arapahoe High School after a school shooting on Friday in Centennial, Colorado.

On the first anniversary of the second deadliest school shooting in the country's history, another community thousands of miles away is trying to come to terms with its own tragedy.

As we reported, an 18-year-old student walked into Arapahoe High School on Friday in Centennial, Colo., and opened fire, injuring one student before police say he shot himself.

The high school is located a few miles from Columbine High School in Littleton, Colo., where 13 people were killed by two students in 1999. And the shooting happened just a day before Sandy Hook Elementary marked the first anniversary of a school shooting that left 27 dead, including 20 6 and 7 year olds.

Today, the question in Colorado turned to why?

The Denver Post reports that suspected gunman Karl Pierson may have been bullied, but he was bright, a member of the track and debate team and appeared to be confident. The paper adds:

"On Friday night, neighbors huddled in the quiet Highlands Ranch neighborhood adorned with holiday lights to console one another.

"Neighbors and students remembered Pierson as a track athlete and a member of the Arapahoe speech-and-debate team whose mother worked for the Douglas County School District. ...

"Jo VanDeWege, who has lived across the street from the family for five years, described Pierson's mother as outgoing and said the family was "very nice, very kind."

"Pierson's parents divorced in late 2011, according to court records. The divorce was finalized in August 2012.

"Thomas Conrad, who had an economics class with Pierson, described him as very opinionated.

"'He was exuberant, I guess,' Conrad said. 'A lot of people picked on him, but it didn't seem to bother him.'"

KMGH-TV says authorities are confident they will find a motive. Arapahoe County Sheriff Grayson Robinson told the station that at the moment it looks like the suspected gunman was looking for his debate coach.

Reuters quotes police saying they knew of "no prior discipline problems."

Robinson said the gunman took his own life, after he realized just how quickly police responded to the scene. Reuters reports:

"'I believe the shooter knew that deputy sheriffs were immediately about to engage him, and I believe that shooter took his life because he knew that he had been found,' the sheriff told a news conference on Friday.

"He said a firebomb-like device was detonated inside the school by the suspect, but a second such incendiary device did not go off and was rendered harmless by authorities."

Newtown, Conn. is expected to mark the anniversary of their shooting by ringing bells at 9:30 a.m. ET. The Hartford Courant leads its Sandy Hook coverage with a story about the 26 playgrounds built to honor the students and educators of the shootings.

The New York Times' story focuses on the daily, painful reminders that still linger in the community.